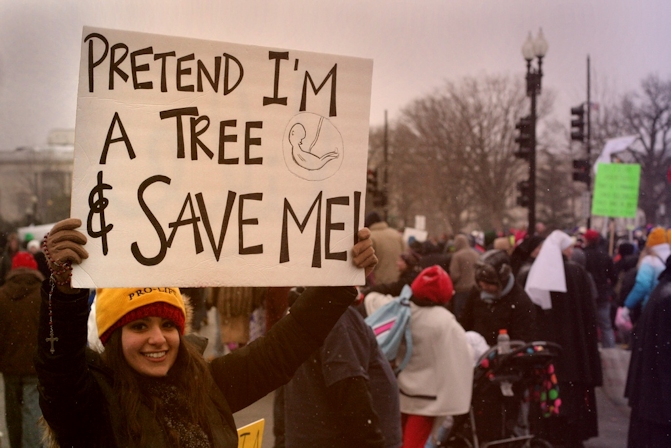 Hello, brave and beautiful ones.  I have a message to empower you. I’m writing to give you permission to do something you were made for. It’s something you can do regardless of your age, gender, or social status. You hold in your mind, heart, and hand the power to do something that can change a nation.

By now you’ve likely heard the news about the complete lack of news concerning the 42nd annual March for Life. Newbusters gathered statements from 20 pro-life leaders condemning the media for giving little or slanted coverage to a march that brought a quarter of a million people to our nation’s capital.

If we’re to be honest, we’ll admit the dismissal or refusal to recognize the importance of our active and growing pro-life  movement is annoying, unjust, and even infuriating.

We could go on and on about the things the media does cover. Newbusters listed them some of those interesting topics here. After watching a “breaking news update” about deflated footballs, I also shared my opinion on our nation’s media bias and mixed up priorities.

Now that we’ve talked about how unfair it all is, where do we go from here? It’s easy to look at the major news stations as these gigantic, rich conglomerates who sway the nation with their broadcasts, magazines, and online articles. Truth be told, the major networks in America do have a lot of power. Yet we must remember, they’re not the only ones who do. There’s a story in the Bible about a teenager named David and a  giant named Goliath. Goliath was huge, had a strong army behind him, and was  menace to the Israelites. He continually mocked the armies of Israel, threatening them with pompous and provoking words. David wasn’t as strong as Goliath,  as big, or as experienced. Yet he had one thing that set him apart from this giant: faith and courage. David believed that there was a cause worth fighting for,  and he was willing to risk all on behalf of it.

As the story goes, David fought Goliath with a slingshot. He threw a stone that knocked the giant out. Then, with great zeal, David cut off Goliath’s head.

Why is this story important for our movement? We can look at the media as giants with money, power, and influence. We can even view ourselves as helpless against  insurmountable opposition. Or we can move in faith and pick up something that can win this battle.

Our weapons are not rocks and slingshots. We need a video camera, an iPhone, a laptop, a voice recorder, a pen, a paintbrush, and a host of social media accounts. It’s 2015, and there are millions of us. Do we realize the unlimited potential for influence we have just among us?

I heard an amazing conservative African-American radio host speak at an event last year. Wayne Dupree mentioned that he was tired of waiting for the popular media channels to call his name, so he became the media. As of now, his Twitter following is over 60,000 people. He has a successful radio show with a strong following, a YouTube channel, and a popular blog with articles covering a number of political and social issues. The increase of social media has leveled the playing fields. It’s given us all an opportunity and a platform to let our voices be heard. Just take a look at Grumpy Cat. A woman’s picture of her cat who has feline dwarfism turned the kitty into a national obsession with memes, t-shirts, and even a new book. It’s kind of amazing how something so ordinary can become viral and catch the attention of millions.

I invite all of you who care about pro-life issues to do whatever you can to get this message across in creative, engaging, and  beautiful ways. If the media didn’t interview you during the March for Life, don’t be discouraged. Take out your phone, share what you thought about the event, and share it with all your friends on FB, Twitter, Instagram, and everywhere. It may seem like a little trickle at first, but if we all join in, we can flood this nation with truth that leads to a culture of life. “The pen is mightier than the sword” doesn’t belong to one group. It’s an inspiration for us all.

Start sharing the news from your point of view.