In the coming month, Live Action will be giving away two free tickets and two free nights in Washington, D.C. during the 2013 March for Life. How exciting is that?! One winner will receive this grand prize. So just think – you can enter to win, and if you do win, you can bring your husband, wife, mom, dad, brother, sister, friend, or child along! More details about entering Live Action’s contest will be coming soon, so stay tuned!

But since we’re talking about the March for Life, we might as well really talk about it. I’m sure you’ve heard about it, but do you really know the story behind it? (I admit, I had to find this out myself.) Why do pro-lifers – in the tens of thousands – attend each year? What’s the history? And what can you do if you’re unable to make it out to D.C.?

What the March for Life is

The March for Life is a literal, peaceful march around a well-known section of Washington, D.C., complete with pro-life stories, signs, buttons, babies, and plenty of people. It ends at the Supreme Court. Women stand on the steps of public buildings, telling the stories of their own abortions, their regret, and their healing. Groups of young people carry banners saying things like “Personhood Now” through the streets. People hand out pro-life buttons, stickers, and signs. You can see the route of the March ahead of time here. But as I’ll explain in the section below, the March is really more than just a march that you could attend any day of the year…

Why pro-lifers attend and why you should attend

I attended the March for Life in 2009 and I’ll tell you, it’s absolutely incredible to see with your own eyes how many pro-lifers there really are. We get bombarded with the media, pro-choicers, some politicians, and probably even friends who’d like us to believe that we are a silly little minority. Friends, nothing could be farther from the truth! If you want to get encouraged, motivated, and inspired to keep on keeping on in your stand for life, go to the March for Life! You will see thousands upon thousands of pro-lifers – of every size, shape, color, race, age, and gender – pouring onto the streets of our nation’s capital.

The March for Life is also an awesome place to connect with other pro-lifers – in your state and throughout the nation. Different pro-life organizations typically offer seminars, conferences, outreach activities (like handing out literature and visiting senators and congressmen), and fun events throughout the weekend. There’s plenty to learn and plenty to do. For young people, the March is also a great opportunity to demonstrate that we are the pro-life generation, and we are willing and ready to stop the genocide of our brothers and sisters.

So attend the March for Life for inspiration, for connections, for education, for motivation, for new friends, and for new ideas! Here’s one conference you’ll definitely want to check out and register for before it’s too late:

The SFLA National Conference is the premier pro-life conference in America. With dozens of speakers ranging in topics from bio-ethics to theology of the body, there is something for everyone, from the new pro-life group member to the experienced campus leader. This year, we are so pleased to have assembled an all-star lineup of professionals dedicated to training you in what you will need to be successful in your campus.

In addition, we will be offering tracks for high school and college students, special receptions for law and medical students, a pro-life job and internship fair.

The short-take on the history

According to the March for Life Education and Defense Fund:

Late in October 1973, grassroots prolife leaders became concerned that January 22, 1974, might come and go without properly memorializing the Supreme Court’s infamous abortion decisions and without petitioning Congress for redress.

No established right-to-life organization was prepared to undertake the planning, financial and operational responsibilities for a high impact prolife March on the U.S. Capitol. But, grassroots prolifers wanted to march! About thirty prolife veterans resolved themselves into a committee and began making plans for the first March for Life. 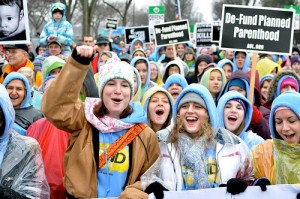 Nellie Gray, who sadly passed away earlier this year, became the recognized leader of the March for Life soon after Roe v. Wade. For decades, Nellie tirelessly called out for unity in the pro-life movement and declared that every single child – no matter how he or she came into existence – needs the protection of our laws. You can read more about Nellie here and here, and you can read the Life Principles that Nellie and the other founders of the March for Life believed in so dearly. (Jeanne Monahan, formerly of the Family Research Council, is the new president of the March for Life.)

Don’t worry! If you can’t make it to D.C. this year (though nothing’s stopping you from entering Live Action’s contest to go for free!), you can attend one of the many smaller marches around the country. I’ve attended one of these marches before as well, and they typically consist of motivating pro-life speeches, a similar march around an area of town, and perhaps some music, t-shirts, and outreach activities. You can expect to find new friends, further inspiration, and great ideas at these marches, too!

Below are a few links to local marches, so you can get a good idea of what to expect. You can always call your local or state pro-life organization and ask for the location of the march in your area. If there isn’t one, consider starting one yourself! Also, some local pro-life organizations organize groups to travel together up to D.C., so that may be an option for you as well. The bottom line? Try to win Live Action’s contest, but whether you do or not, find a march to go to in 2013!