It’s amazing what a difference a few months can make. They certainly make a big difference for Lena Dunham. Right now, she’s happy to treat this adorable little guy as a fellow political activist. But just a few months ago, Lena wouldn’t have objected if a late-term abortion provider had ripped those pudgy little arms off with a pair of forceps. Well, I guess she might have objected–a mutilated corpse doesn’t exactly make for the best photo-op. 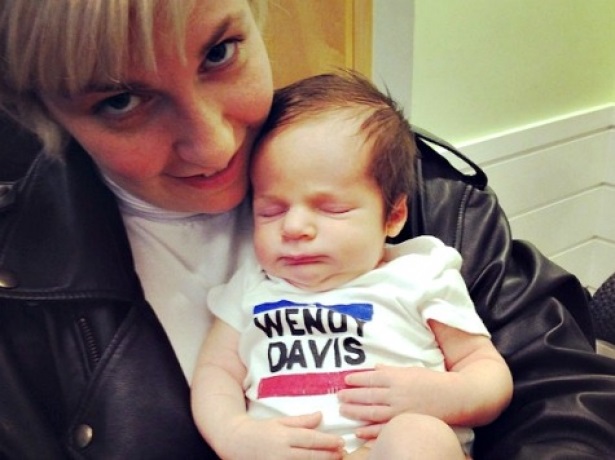 “Listen Lena, I’m outta of the womb now and entitled to legal protection under the 14th Amendment. We clear on that?”

The actress posted this picture to her Instagram page in support of Wendy Davis’ gubernatorial campaign. At first glance, the move is slightly puzzling. After all, Davis is primarily known for her 11 hour filibuster against Texas SB 5, legislation that included a ban on most late term abortions.

So it seems odd that Ms. Dunham would pose with someone who she feels should have been eligible for dismemberment only a short while ago. Granted, this could simply be her idea of a joke, as Dunham’s approach to humor doesn’t always fall within the mainstream. For example, whereas most people would look upon the subject of child molestation with horror, the HBO star has played it for laughs.

While Lena Dunham may have gotten behind Wendy Davis, polls show that not many Texans have done the same. Her being a champion for late term abortion probably has something to do with that, as the thought of tearing chunks out of a fetus isn’t especially pleasant. That process get’s even less appealing when you try to imagine how it might feel. Dr. Kanwaljeet Anand’s research at the University of Tennessee suggests that a fetus can suffer pain after 20 weeks of development. Although the issue remains controversial in the medical community, University of Utah neurobiologist Maureen Condic argues that “there is sufficient uncertainty to warrant giving the fetus the benefit of the doubt.”

Dunham and Davis aren’t so generous. Neither is Iowa Senate hopeful Bruce Braley. Although he claims to be against “all late-term abortions that aren’t necessary to save the life or health of a mother,” Braley’s record as a congressman tells a different story. In addition to voting against a federal ban on abortions after 20 weeks, he also cosponsored a bill that would have repealed most of the abortion rules currently on the books.

Late-term abortions are gruesome, and there’s evidence that they inflict agony on their victims. So, it makes sense that Americans are disturbed by the practice, with surveys showing that a majority of women want to see it outlawed.

While portraying her TV character, Hannah Horvath, Lena Dunham remarked, “I think I may be the voice of my generation.” Thankfully the polls on abortion say otherwise. It’s surprising that when it comes to late-term abortion, many candidates would rather listen to Miss Dunham instead of the public in deciding their views on the matter.