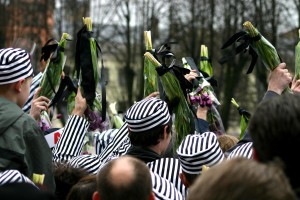 Protesting is becoming increasingly common in our world.

Protesting. It’s a rather common thing in our world today. No matter if you’re talking about the Occupy Wall Street protesters, the Arab Spring protesters, pro-life protesters, the Westboro Baptist Church protesters, or the “kiss-in” protesters at Chick-fil-A, protesting is becoming less of a foreign idea and more of the “thing” to do. Thankfully, unlike many protesters throughout the world, we live in a nation that guarantees our right to free speech and our right to speak out in support of or against certain ideas.

Of course, we all could easily name protesters we agree with and those whom we completely oppose. (Personally, I particularly disagree with the Westboro protesters, since it’s obvious that they give Christianity a bad name with their outlandish claims and cruel statements.) It’s obvious to anyone who’s read my articles that I agree with the position of most pro-life protesters. Welcome to America. We all have the right to support and not support a variety of causes.

But here’s what I don’t like – and I’m hoping you can agree with me here. Pro-life protesters are specifically called out and unfairly discriminated against. The “kiss-in” declared by the gay community yesterday at Chick-fil-A restaurants across the nation is a perfect example. Nowhere do you hear widespread outrage against this protest. Nowhere do you hear people overwhelmingly demand that innocent children should not be exposed to the kissing or other actions of people who their parents may teach them are morally wrong. Nowhere do you hear demands for “bubble laws” against gay protesters outside family restaurants.

Regardless of your stance on gay rights, we can all agree that there were families at Chick-fil-A yesterday who didn’t want their children to watch two men kiss. We can all agree that Chick-fil-A does not support gay marriage – although the people there have stated that they will freely serve any person, regardless of sexual orientation. We can all agree that the “kiss-in” was an “in-your-face” protest: we’ll do what we want, anywhere we want, no matter what you or anyone else thinks. Okay, this is America. The gay community technically has the right to do this, no matter how much their actions were in bad taste or offensive to some. 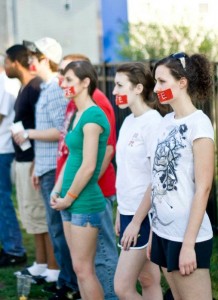 Here’s the problem: people constantly complain about pro-life protesters who hold up signs of aborted babies or who stand outside abortion clinics – or the houses of abortion doctors – and protest what’s happening. These protesters are commonly called out for “offensiveness” and “bad taste.” Cities and states pass “bubble laws.” Pro-life protesters are arrested for actions that no other protesters can be arrested for. And why? Simply because of the issue they are protesting. This is wrong, discriminatory, and very hypocritical. Plain and simple, it’s un-American.

Now, I can already hear some people saying that pro-life protesting is different from yesterday’s “kiss-in.” After all, pro-life protesting is much more common. Well, so? Just because a viewpoint is more commonly protested against, should the protesting be prohibited? Exactly how does that support free speech? Others will say that the posters of bloody, cut up aborted babies are much more offensive than two men kissing. Well, in whose opinion? Yours, obviously. But not everyone will agree. And each American has the right to be more offended by one thing than another. The fact that an action is offensive is not a reason for the person doing that action to lose his or her free speech rights.

Still others will claim that the women entering abortion clinics are in a perilous time of life and need to be protected. But aren’t small children in Chick-fil-A young, impressionable, and arguably in a perilous time of life themselves? Couldn’t we argue that parents should have the right to take their children to a family restaurant without the risk of seeing offensive public displays of affection? And again, I’m not arguing for or against gay rights – I’m simply putting forward arguments that many Americans could indeed make.

Let’s finally consider the position of abortion clinic workers – who many believe should not be exposed to protesters as they enter and leave their workplace. Yet it’s the very same argument that could be made for the employees of Chick-fil-A – many of whom are young high school students. Why should they be exposed to protesters, including some who may be rude or unkind to them because of the company they work for?

Indeed, this protest situation in America is patently unfair and targeted against pro-lifers. Though pro-life protesters are protesting an actual act that kills people (abortion) and not mere words of personal opinion (Chick-fil-A), they are the ones who are arrested, attacked, and targeted in the law. The situation truly couldn’t be more un-American.