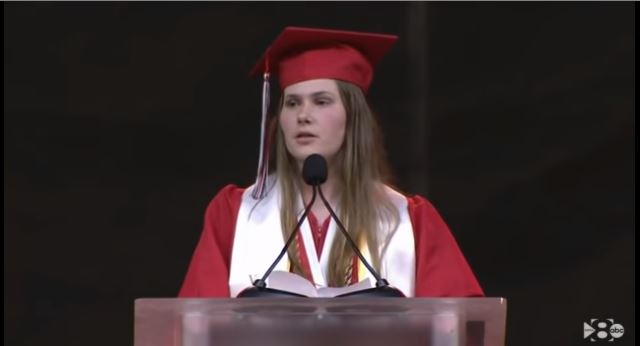 A Texas high school valedictorian decided to toss her approved speech on Sunday in favor of a new one attacking a state pro-life law, earning praise from pro-abortion celebrities and politicians.

Paxton Smith, who graduated at the top of her class at Lake Highlands High School, was originally set to speak about the media, and “how much of it she consumes and how that consumption has shaped the way she sees the world,” according to D Magazine. This large amount of media consumption — which can often have a heavy pro-abortion bias — might explain the reason she instead decided to attack Texas’ “heartbeat bill” in her speech — a bill that bans abortion once a heartbeat can be detected in a preborn human being. This is usually by about six weeks, though the heart actually begins beating between 16 and 21 days after fertilization.

Smith, by her own admission, has been influenced by this one-sided, inaccurate reporting. She said:

I have dreams and hopes and ambitions. Every girl graduating today does. And we have spent our entire lives working towards our future, and without our input, and without our consent, our control over that future has been stripped away from us.

WARNING: Some readers may find images below disturbing.

Abortion as feminism is self-defeating

Smith has bought into the lie that having a baby would ruin her life and prevent her from accomplishing anything. Feminism began with the notion that women could do it all, that women are strong and capable. But there was apparently fine print in that memo: unless you are a mother.

Babies do not stand in the way of a woman’s dreams and goals. Ask Brianna Hill, who gave birth in the middle of taking the bar exam, and passed. Talk to Danielle Yonemura, who was only 14 years old when she became a mother, but who graduated from college at the age of 24, or Morgan Trivunić who graduated from law school and passed the bar exam after having not one, but two babies. Briana Williams graduated from Harvard Law School, walking across the stage with her baby in her arms. There’s also Cassie Juste, who graduated from college, took the LSAT, and attended law school during her pregnancy and after the birth of her son. When asked how she survived law school with a small child, she said, “I don’t think I would have survived without him!”

Smith’s message focused on women needing abortion in order to succeed, and painted abortion as a personal and societal good — but how many former teen mothers were present at that graduation, watching their babies graduate? How many girls in the audience were themselves teen mothers, or had become pregnant during high school and were now suffering emotionally or physically from their choice to abort? Filled with regret and sadness, Smith’s message to them was that those emotions are invalid because she believes abortion is good. Her message to teen mothers was that they were destined to be failures.

The Michelle Williamses of the world might tell girls they can’t find success at school or in a career if they’re mothers, but it is obvious that many mothers accomplish amazing things every single day, because they are strong, smart, and capable.

Sex may lead to babies

It’s important to note that, although Smith acts as if a pregnancy might just happen out of nowhere, basic high school biology tells us that sex is how babies are made. If a woman were to be tragically raped and become pregnant, as Smith mentioned, abortion would still be unnecessary, and might even be detrimental to a woman’s well-being. Abortion leads to an increased risk of alcohol abuse, drug abuse, depression, and suicide. For many rape survivors, abortion was not the solution they thought it would be. Instead, it was another traumatic act inflicted on their bodies and hearts.

Abortion is dehumanizing, not life

Every embryology textbook teaches that a human being’s life begins at fertilization. There is no doubt. But in order to sell abortion, the abortion industry told women that they get to decide when life begins, and whether their babies are human or not. Logically, this makes no sense. One person’s opinion on her child’s humanity does not change the scientific fact that from the moment of fertilization, that human being has her own DNA.

What is dehumanizing is the destruction of innocent human life. There are four main ways to kill a preborn child. The first, the abortion pill, deprives the baby of nutrients. A preborn child can’t be starved to death if she isn’t a living, growing, human. The second, a first-trimester surgical abortion, uses a powerful vacuum to suction the baby to pieces — tiny arms and legs distinguishable amid the blood. The third, a D&E abortion, involves tearing the arms and legs off of a child who, in some cases, is old enough to survive outside the womb. She dies as she is dismembered, and her skull is crushed. The third is induction abortion. These babies are old enough to live outside the womb, but instead, they are injected with a drug to cause cardiac arrest. Two or three days later, their mothers deliver them — stillborn.

But according to Smith, not being allowed to do this to an innocent human being is dehumanizing.

The hand and arm of aborted baby—7 weeks. (Photo courtesy of prolifesociety.com and imagesofabortion.com.)

READ: Denying humanity of preborn children is the very definition of ‘junk science’

Every day, the voices of an estimated 2,363 babies are snuffed out in the United States. That is the real war on our daughters and our sons. There is no right in the United States to kill an innocent person because you think they are standing in your way to success — unless that innocent human being is a woman’s own preborn child, with his or her own unique DNA, who would have his or her own goals, dreams, and ambitions if allowed to live.

The celebration of abortion

Likewise, Beto O’Rourke, another failed Democratic presidential candidate, said, “Paxton, thank you for having the courage of your convictions and inspiring Texas with your refusal to accept injustice as the price of participation in civic life.” He also added, “May we all use our place in this democracy to fight for what we believe to be right and follow your example!” Would he have said that if Smith tricked her school administration to make a pro-life speech?

Comedian Sarah Silverman called her “brave” and author Jodi Picoult said Smith is a “queen” who spoke with “courage, integrity, and intelligence.”

Smith’s words were likely harmful and hurtful to anyone in that audience who had been a teen mother, or who had an abortion and regretted it. She told every woman who had ever faced an unplanned pregnancy in that audience, and now throughout America, that if she kept her baby, she must be a failure at everything else. And abortion enthusiasts cheered her on.

As valedictorian, Smith has proven that she works hard, and is smart and capable. Why would she believe that her own child would be the one thing that would stand in her way? Why does she believe she would be incapable of being both a mother and a student? Or a mother and an employee? Or a mother and a business owner? She is absolutely capable of doing any and all of these things, yet pro-abortion feminism has told her that she can’t. This insidious philosophy pits mothers against their own children under the guise of eradicating “injustice.” But the real injustice is done to the child who is eradicated through abortion.