This year we enter the 45th year of legalized abortion in the United States and I think back to the day I came up close and personal with abortion. The day I saw abortion victims first hand! I have witnessed many things in my over thirty years in this fight for the sanctity of human life: protests, police abuse, men dragging women into the abortion clinic, and two funerals from legal abortion.

The first funeral was for a woman killed after submitting to an abortion. Her name was Carolina Gutierrez and she received such a serious infection by the legal abortion facility she visited in Florida, that doctors had to amputate parts of her body to try and save her life. But, the infection won and Carolina and her unborn child became another statistic in the abortion battle. I took these pictures with the permission of her family while attending her funeral:

Carolina Gutierrez – woman killed from legal abortion. (Image credit Carole Novielli with permission of the family at the time). 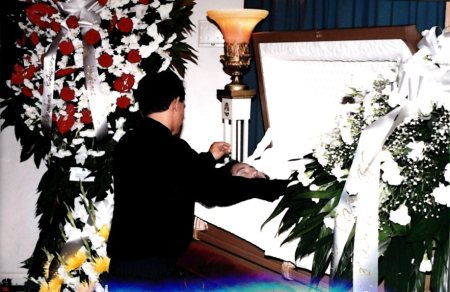 Husband of woman killed from legal abortion over her casket.

The funeral was very emotional.

Carolina’s tragic story had been in the news for days and knowing the truth about the condition of the abortion clinics in my county caused me to be angry, especially, in light of the continued silence by abortion advocates when women die. 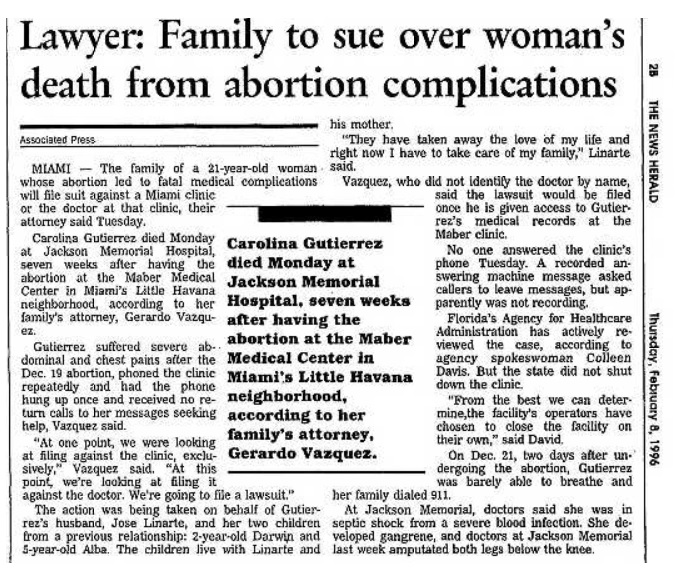 But nothing ever affected me more than seeing these next victims of legalized abortion up close: the broken bodies of the preborn babies.

We knew the abortion clinics might be throwing the aborted babies in the trash. Abortion facilities had done it numerous times before. But, how would we know which clinics in our area were disposing of these precious babies illegally? There was no way to know for sure.

The task was daunting. But finally, our search paid off.

It was a Saturday afternoon when we approached a clinic located in a strip mall. The abortionist shared the dumpster with other business owners and we received permission to remove some discarded wood from the trash. Our real goal though was the clinic’s trash- BINGO!

We grabbed several bags over a period of time, until, one day, we discovered that inside the bags were the containers that held babies aborted by suction abortion. 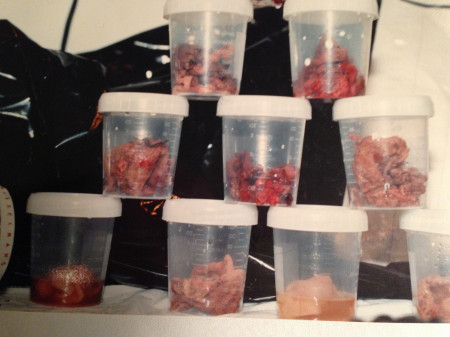 Then came the task of opening up each and every gauze sac. I stilled myself to open each one, knowing what I might see – not knowing how I’d react to it.

Several did indeed look like ground meat.  To see their fragile little bodies so ground up that no distinguishable pieces remained was not entirely a surprise – after all – these were early abortions and babies who had been violently sucked out through a tube and into these jars. 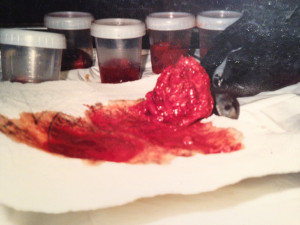 Aborted babies found in a trash dumpster along with medical documents.

Then…after carefully slicing one gauze sac, there it was.

The fully formed arm of an aborted child. 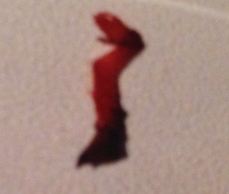 The arm of aborted baby thrown in the trash and discovered by pro-lifers.

Then a leg, another leg, ribs, skull, etc… 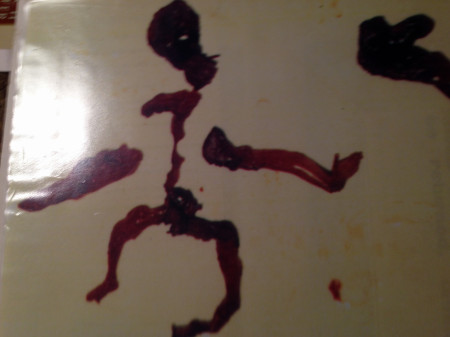 As we rummaged through the bags we could see the medical records of the women whose children lay torn in pieces. The cold-hearted abortionist had discarded the bodies of these dead babies in the trash along with their mother’s medical records with no care or concern for either. 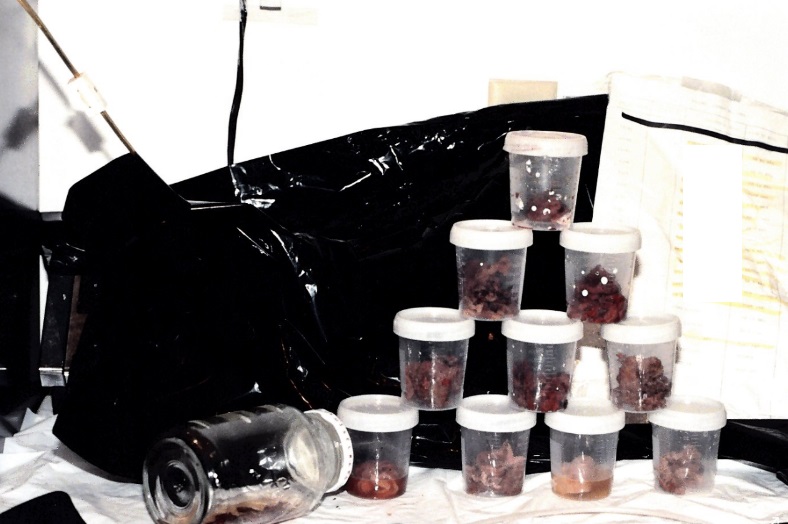 At the bottom of the bag, we found a large foot which, we estimated was from a preborn baby in the second trimester.

The remaining body parts of that child were never found. 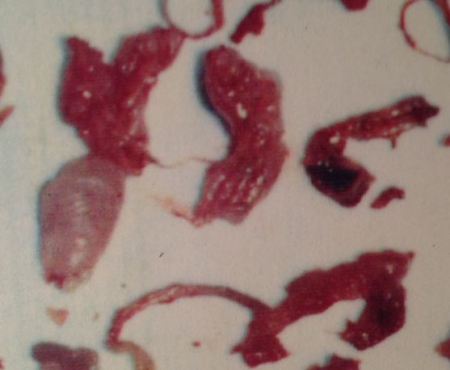 As we meticulously went through the bags from that abortion clinic, I found myself feeling detached. I was looking squarely at the tiny remains of babies who suffered a horrific death and yet I had little emotion. After all, I had to finish the job I set out to do. I had to continue looking through the bags and opening each and every sac. 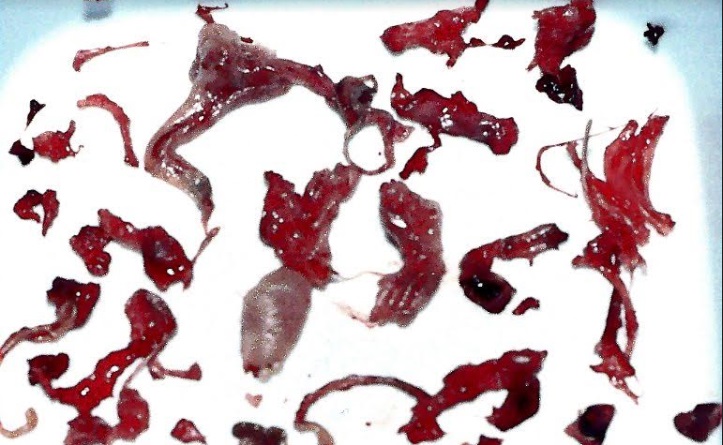 Parts of aborted babies found in a trash dumpster.

Was I heartless? Uncaring? Unfeeling?

Or was I being scientific and doing a job that had to be done?

I wrestled with this for a few days. And then…. 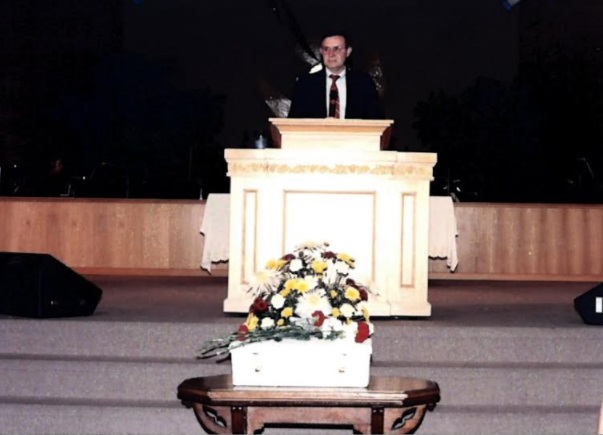 Memorial Service for aborted babies found in a trash dumpster. 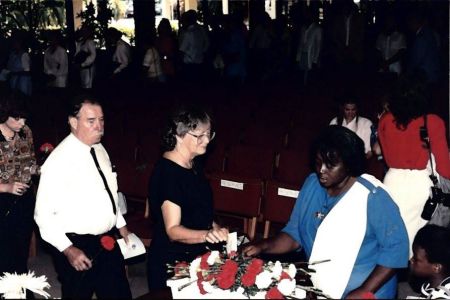 The day arrived for the funeral for these little babies.

We told no one who found them.

In reality, those who attended did not care about the details – they cared only about giving these precious preborn children a decent burial.

They wanted them remembered – their lives must count ! 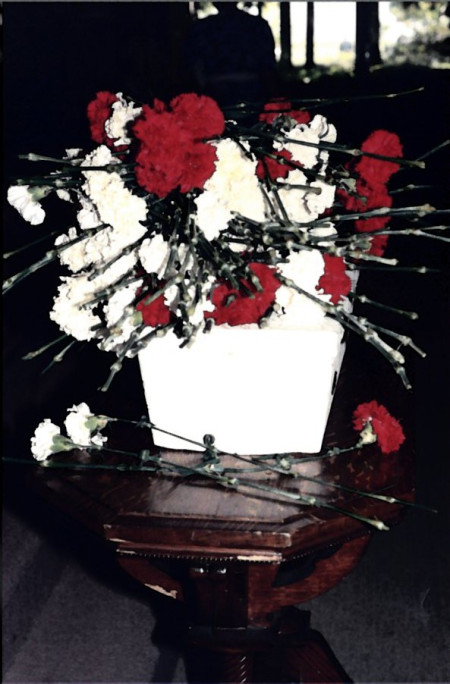 I attended the funeral like a pro, documenting the event as if I wasn’t involved at all. As a journalist, I stood on stage watching people tearfully come forward and lay flowers as a symbol of life on the small casket we purchased to place the tiny pieces of their broken bodies in.

One moment I was taking pictures and the next….the next moment I was sobbing uncontrollably in the arms of an usher who was standing beside me on the stage. He must have seen a look in my eyes because he became a comfort as I completely lost it and wept like a mother who just received the news that her beloved child was dead.

The tears and groans continued for a while and took me by surprise. After all, I was a professional, I was detached, I was looking at this from a journalists point of view.

But, I am also HUMAN!

As I write this today, I feel a lump in my throat as the memory of what I saw wells up inside me. I often think about the idea that abortion does not affect those who participate in it – the mothers, doctors, nurses, and clinic staff and I have to conclude that it absolutely does affect them.

I attended two funerals and they were both the result of abortion. One for a woman who believed the lie that legalizing abortion made it safe. She left behind born children and a husband, a grief-stricken family who mourned her death.

The other: babies, discarded like trash but not forgotten in my heart.

As a young girl, I watched documentaries about the Nazi Holocaust and the Jews they slaughtered mercilessly. Most people watched those films with great interest in the stories and facts they document. But, for me, when I watched them, I recalled asking in the midst of my outrage, “Who took those pictures?”

I remember thinking that had those pictures never been taken, society would not be sitting here today in absolute horror of what took place. I knew at that moment that I wanted to document the abortion holocaust, and by the guidance of God, in some small way, I have.