A dozen former and current employees of the National Abortion Federation (NAF) have turned whistleblower, accusing the organization of failing to protect employees against alleged sexual harassment. The information was published by the pro-abortion blog RewireNews, which gives detailed descriptions of repeated accusations of sexual harassment charging NAF management with a slow response. NAF calls itself a defender of women’s rights, but it appears that in this case, they may be protecting an aggressor.

The organization prides itself as a professional membership organization dedicated “exclusively to abortion care,” which trains and publishes “guidelines” for abortionists. NAF members, which include Planned Parenthood facilities, are repeatedly quoted by the media as experts, despite the fact that NAF members and NAF-accredited abortion facilities are routinely being exposed as far from stellar.

Online, NAF claims they have a “longstanding policy prohibiting sexual and other illegal harassment, and all employees are expected to abide by this policy.” 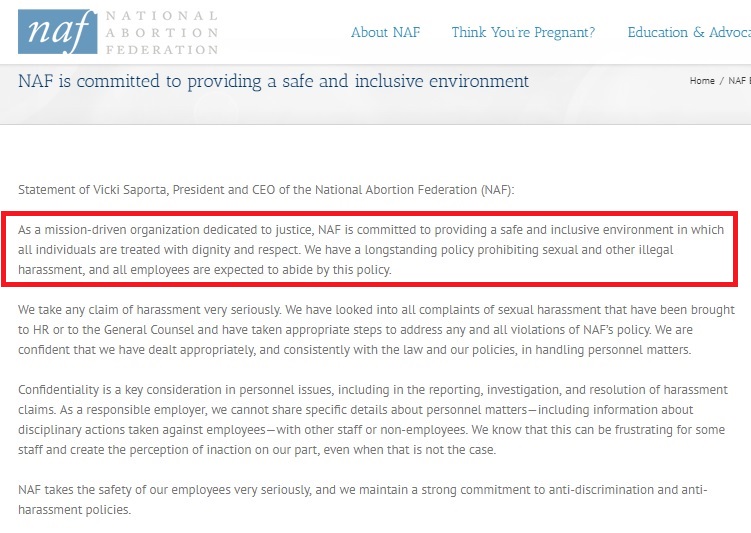 But reviews left anonymously by unverified “employees” on the website, Glassdoor, say otherwise and paint a picture of a systemic environment of sexual harassment, racism, and lack of respect from management toward rank and file staffers at NAF.

A review left in April of 2018, claimed, “Workplace sexual harassment and racism both go unchecked. Both of these have been perpetrated by people in positions of power at NAF.” The same reviewer alleges that NAF’s only focus is on “safe and legal abortions for white women.”

Another reviewer claimed the morale at NAF was “poor” and that the work environment was a “lawsuit waiting to happen.” The reviewer also suggests that NAF “needs a union” — something abortion industry partner Planned Parenthood is reportedly fighting against. 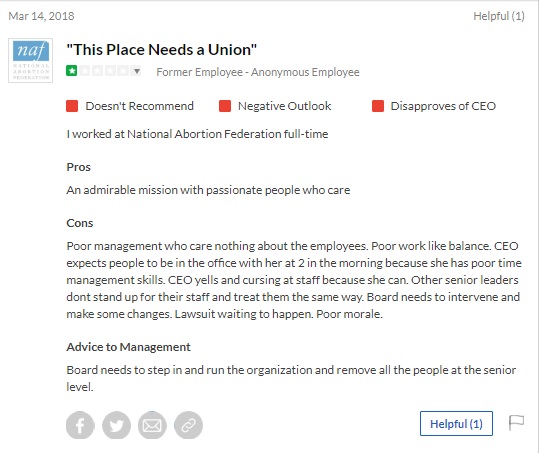 A review from December 2017 claimed management doesn’t care about the rank in file and also claims NAF allows racism and sexual harassment. It states in part:

Despite being told that we don’t have it in the budget to raise our salaries, somehow NAF was able to build a multi-million dollar office space and fill it with unnecessary conveniences like fancy coffeemakers. Meanwhile, our CEO takes lavish vacations on her yacht while the rest of us work two jobs just to pay rent and bills.

In terms of work-place culture, some employees at NAF are blatantly disrespectful and downright abusive. NAF claims to be a feminist organization that wants to fight gender oppression, yet NAF continues to defend and protect sexual harassers and racists who work here. Despite multitudes of complaints to HR, these people still work at NAF and some even continue to take on more powerful positions….

The review goes on to advise NAF management, “Practice what you preach! Don’t tell your employees to believe your patients, when you don’t even believe your employees. If you’re protecting verbally abusive, racists, and sexual harassers at a “feminist organization”…”

The sentiment was backed up by a June 2018 RewireNews article which cited claims by several NAF staffers that they were frustrated with the lack of response from NAF over repeated sexual harassment allegations against the organization’s security head, Mark Mellor.

Mellor, according to his affidavit in the lawsuit surrounding NAF and the Center for Medical Progress, joined NAF in 2013, as “Security Consultant,” and directed the “security program at the National Abortion Federation.” Mellor provided “specialized security services” at many NAF events as well as “24/7 emergency assistance to NAF members.” Mellor indicated his focus was to “ensure a safe, secure and intimidation-free environment” for annual NAF members attending meetings — the same meetings caught in undercover footage by CMP showing NAF members and Planned Parenthood staffers discussing the abhorrent practice of selling of aborted baby body parts, among other topics.

What made O’Connell most uncomfortable, she said, were the unwanted glances and touches she received from Mellor on a regular basis. She said he would routinely look her up and down, and occasionally run his hands down her back or place them on her waist.

After O’Connell allegedly went to NAF’s general counsel about her concerns, she said, “I felt like after that—after she told me that I should come to her office and report it—I felt like I was in her office every week noting something that had happened, where he had put his hands on my waist or made other comments to me.” Rewire notes that though told “the matter was being handled internally,” nothing “concrete” was ever done, to the employee’s knowledge.

The NAF worker claimed the “unaddressed issues with Mellor’s behavior” contributed to her leaving NAF in 2014. In her exit letter to management, the NAF worker allegedly wrote, “This is not an issue I ever thought I would face at a women’s organization.”

Another NAF staffer claimed Mellor would openly display disrespectful images of women on his computer screen and when a male NAF co-worker suggested Mellor change the image from the screen, NAF staffers witnessed the “two men laughing about the situation.”

“It was changed, but it was seen as this giant joke,” a staffer told RewireNews, while describing the environment at NAF as “a hostile work environment.”

Despite the fact that some staffers felt pressure not to speak out publicly — because, as one staffer admitted, it “hurts the movement” — several others did. They described Mellor’s behavior as “somewhat creepy,” “extremely inappropriate,” “extremely unprofessional,” and “deeply inappropriate.”

NAF staffer Kathleen Heckert blasted NAF’s handling of the repeated harassment she claims to have witnessed, calling it “a very uncomfortable environment” where “multiple people feel… harassed,” giving them a “very uncomfortable, inappropriate, and kind of frustrating feeling.”

RewireNews reported that another staffer bemoaned the way that “management at NAF has willfully ignored some of the charges that have been brought to their attention.”

After virtually dismissing serious allegations of the decades-long cover-up of child sexual abuse by Planned Parenthood, it is more than a little surprising for pro-abortion RewireNews to go public about these allegations of sexual harassment at NAF. Unsurprisingly, NAF itself has been silent after Live Action’s Aiding Abusers report and docuseries was published (while Rewire unprofessionally came out against it) even though the report documents serious allegations of a failure of Planned Parenthood to follow mandatory reporting laws. This information was gleaned from court cases, civil lawsuits, health report documents, former staffers, and undercover investigations.

NAF members have also had their share of scandals and pro-lifers have repeatedly documented the careless way some NAF members treated abortion patients, including sexual abuse. Live Action News previously published not-so-flattering reviews by alleged patients of abortionist Warren Hern, one of the founding members of NAF, now serving on its Board of Directors.

One reviewer claimed Hern “speaks aggressively and it made me feel uncomfortable and slightly scared.” 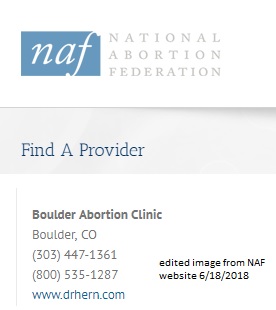 Abortionist Curtis Boyd brags online that he helped establish “the National Abortion Federation and is a founding member of the Federation’s Board of Directors.” However, reviews left on Google (previously reported by Live Action News) indicate a lack of trust by his patients.

Another example of NAF’s lax standards can be seen in the case of Kermit Gosnell. According to the Grand Jury Report, Gosnell was allowed to work at a NAF clinic in Delaware. Though NAF’s President and CEO Vicki Saporta, who recently announced her plans to retire in June 2019, claims NAF denied Gosnell’s House of Horrors abortion facility membership after it was observed that “no one was monitoring or taking vital signs of patients who were sedated during procedures,” among other serious violations, prosecutors noted that NAF failed to report the violations to authorities. 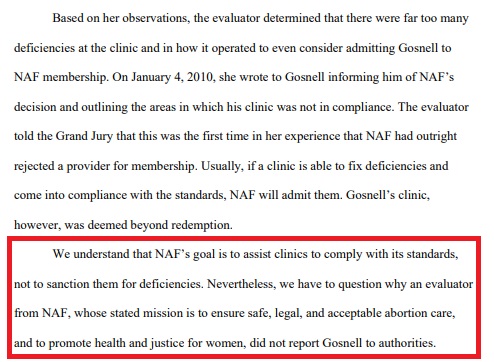 In a follow-up to its article, RewireNews claims NAF sent an e-mail stating they have suspended Mellor. NAF then published a statement to their website, which reads in part:

NAF is committed to providing a safe and inclusive environment in which all individuals are treated with dignity and respect…. We take any claim of harassment very seriously. We have looked into all complaints of sexual harassment that have been brought to HR or to the General Counsel and have taken appropriate steps to address any and all violations of NAF’s policy. We are confident that we have dealt appropriately, and consistently with the law and our policies, in handling personnel matters….

While the media is quick to quote NAF as the authority on “anti-abortion violence,” they have remained silent about  RewireNews’ report. Even more troubling are the words of a former NAF staffer currently working in the reproductive justice field: “NAF is not the only national reproductive rights organization with workplace issues.”