On June 22, the Jackson Right to Life office and Congressman Tim Walberg’s office, located in the same building in Michigan, were targeted by pro-abortion activists.

A press release sent out by U.S. Congressman Tim Walberg’s (R-Mich.) office claims the attack took place at his campaign office in Jackson where multiple windows were broken, and the front door — shared by both the Congressman and Jackson Right to Life — was smashed. The release also alleges that the attack at the two-story office building may be “part of nationwide domestic terrorism caused by Jane’s Revenge to attack pregnancy centers.” Walberg’s release claimed the criminals also spray-painted a message signaling they were a part the pro-abortion terrorist group. Jane’s Revenge has threatened to ramp up violence in the wake of a possible overturn of the 1973 Roe v. Wade Supreme Court case.

According to Kathy Potts, Executive Director for Jackson Right to Life, messages were spray painted in red on the organization’s sign and also on the home of a resident nearly two doors down for unknown reasons. While both the resident’s home as well as the pro-life center’s sign were tagged with the insignia “Jane’s Revenge,” the additional message left on the resident’s home reads, “If abortions isn’t safe niether [sic] R U!” This matches other messages left by Jane’s Revenge.

A tweet posted by the Congressman reads, “My office and Jackson @Right_to_Life were the latest to fall victim to the disgusting domestic terrorism targeting pregnancy centers and pro-life groups across the country. We won’t be intimidated or stray from our principles. This only strengthens our resolve.” 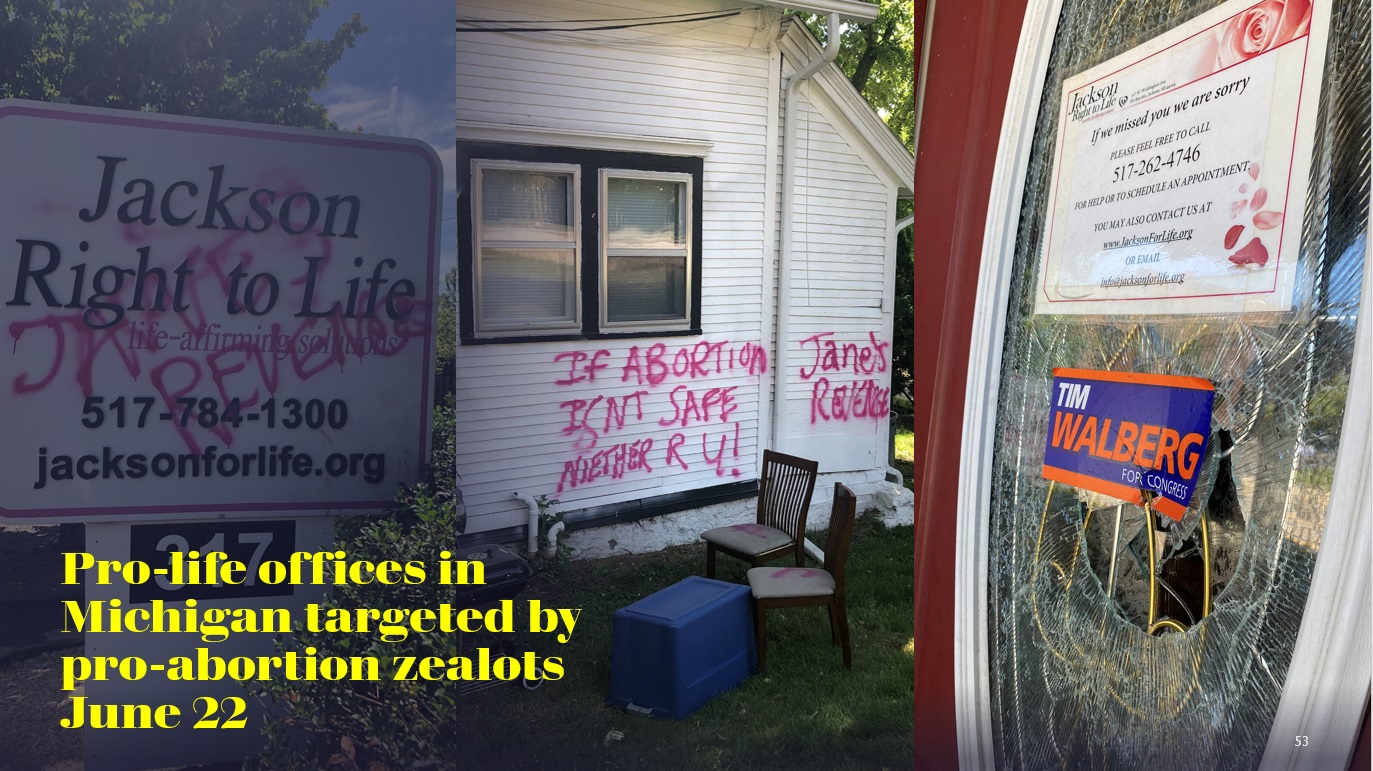 “I never shy away from my record as a strong conservative and defender of life. This strong record puts me in the crosshairs from those on the radical left but I will never stand down or compromise my convictions and knowing the people at Jackson Right to Life, this will only strengthen their determination to protect the unborn,” Congressman Tim Walberg stated in his release. “I will continue to fight for our principles and will stand strongly against the culture of violence and death,” he also added.

Both groups have contacted law enforcement and Potts told Live Action News that Jackson Right to Life vows to prosecute the perpetrators when they are arrested. Potts told Fox News that they “don’t hate” the vandals and are “praying for them.” 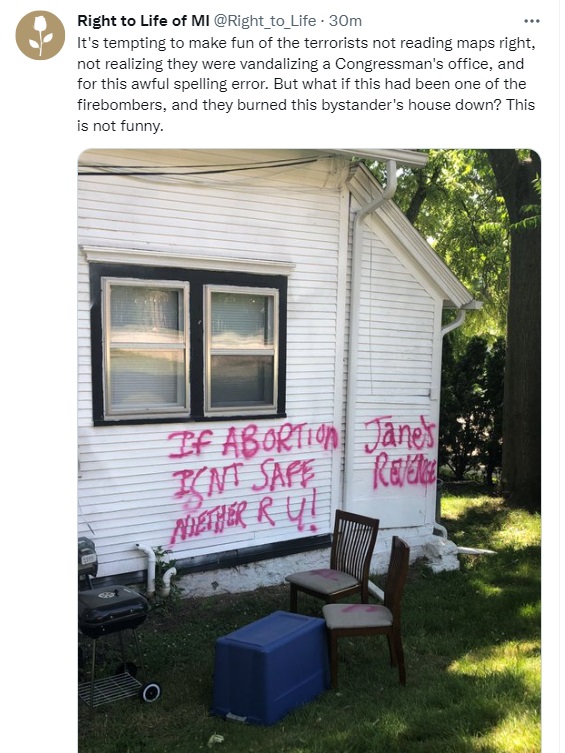 “It is shameful that President Biden and Speaker Pelosi have both refused to condemn these intimidation tactics from radical pro-abortion activists. This wave of violence across the country against pro-life organizations and individuals has got to stop,” Walberg also said.

The latest attack in Jackson follows two other acts of vandalism against pro-life centers in the Detroit area just a few days prior. The Lennon Pregnancy Center in Dearborn Heights was spray painted with message, “If abortions isn’t safe, neither are you!” and the Pregnancy Care Center in Redford, Michigan, was spray painted with the message “This is a Fake Clinic,” and was signed, “Jane.” Both pro-life centers’ windows were broken.

Jane’s Revenge allegedly took credit for those two attacks, sending an e-mail along with an image of the Lennon Center to Abolition Media, which has been used multiple times to send out messages by Jane’s Revenge.

The latest attacks come as Ohio Attorney General Dave Yost and 18 other AGs from various states sent a letter demanding that U.S. Attorney General Merrick Garland take swift action to response to these and other pro-abortion terrorist acts. The letter criticized the AG, calling the lack of action thus far as intolerable, politically motivated, and in violation of his oath of office.