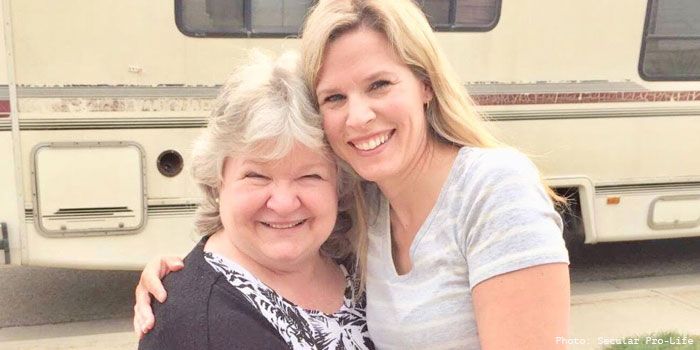 (Secular Pro-Life) My name is Louise McLean and I’m a Newfoundland native who lived in Bishop Falls until I was 10 years old. It was at that age my dad got a job out of province and my family moved to British Columbia. I am also a mother from rape.

When I was 16, I got my first somewhat serious boyfriend. After only 3 months of dating, that boyfriend raped me. We had not been having sexual relations, but one night he forced himself on me in spite of much insistence and resistance to stop. A couple months later I went to the doctor and heard the words “You’re pregnant.” I was filled with immediate joy and a smile came across my face. I tried to contain how I was feeling, because in my head, I couldn’t comprehend how I could be happy about being pregnant from rape—but my heart won the battle. My doctor told me there was an option for abortion, but he would not perform one, and I told him that was fine because I didn’t want one anyway.

Back 40 years ago, unwed, teenage pregnancy, and rape had such stigmas attached to them. I didn’t want to tell my parents because I was afraid that they would think the precious little baby growing inside of me was something to be “taken care of.” My innocent daughter may have been conceived in rape, but was no less worthy of protection and love. So the best way I could figure to protect her was to hide the fact that I was pregnant and the circumstances surrounding her conception.

During that time I went to Planned Parenthood as suggested by my friend and school nurse. At first I didn’t want to go because I thought they only did abortions, but I was assured they would counsel me and help me decide what was best for me—so I went. 16 years old and petrified. I sat in the waiting room looking at their pamphlets to see what they had to offer; I didn’t see anything that was promoting me to keep my baby. I went to the woman at the desk and told her that I came there to talk to someone about how to deal with my pregnancy, and that that I was told they have counselling to help girls in my situation.

My pregnancy remained a secret until I was 6 months pregnant, at which time my mother asked me what I wanted to do. To her surprise, I told her that my plan was to finish school and have my baby. It wasn’t that easy for an unwed, pregnant, teenage girl to go about normal activities without getting nasty comments from strangers on the street about how I shouldn’t have been sleeping around; that I was a disgrace and a bad influence on young girls; that I should be embarrassed and ashamed, not walking around smiling. But what hurt the most was hearing people say that I should have an abortion. How people could hate me and my baby so much was beyond me.

My due date was November 26, 1976. Exactly two weeks before that day I was in school and my big belly did something amazing that caught me and my friends off guard. It was the end of lunch hour and in a panic someone walked me to my cooking class while someone else ran to get the teacher and school nurse. They both looked at my belly and told me the baby had dropped, explaining to me that in the next two weeks or so my baby would be born.

I could feel her contracting for the next few weeks. My regular doctor went on holiday. When I saw the new doctor, she didn’t believe my due date was November 26, saying to me that young girls like me didn’t know when they got pregnant—even though I had told her that I knew the day, the hour and the minute. Back then you didn’t question doctors, so I listened to her instead of the school nurse who told me I could have the baby any day.

Finally, on Friday December 17th, I went to see another doctor who was in charge of delivery. He asked me if I could feel the baby contracting trying to get out. I said how long does that go on before the baby is born. He told me that it can be for a few days after the baby drops. Shocked, I informed him that it has been going on for weeks. He immediately ordered X-rays with bed rest and upon the results he admitted me Sunday for emergency C-section, explaining to me that I had placenta previa and I had not dilated at all. The doctor asked if something were to happen during delivery, who should I save: you, or the baby? To which I said, “The baby, of course.”

That Monday morning, 40 years ago, I welcomed my darling daughter, Dianalee into the world. According to the doctor my baby was born with her skin in a state of decay due to being long over due. He told me that he recorded my daughter’s birth in the medical book of records as “miracle birth, unexplained.”

In her 40 years of life, Dianalee has NEVER reminded me of the rape or my rapist. It has been such a pleasure watching her grow into the fine young woman she is today. She and her husband Brian are involved in charity work, using their testimonies to speak hope into the lives of others. They have also blessed me with two grandchildren, whom I can’t imagine my life without. I have seven grandchildren all together.

People need hope! They need to know they are not alone and it can be done. Many women have done it before them and many women are doing it today. I am just one of the 75-85% of women pregnant from rape who embrace the lives of their children either becoming parenting moms or birth-moms. I speak out to offer encouragement to pregnant rape victims. Your baby matters, but how he or she was conceived does not. Hang in there. You got this!