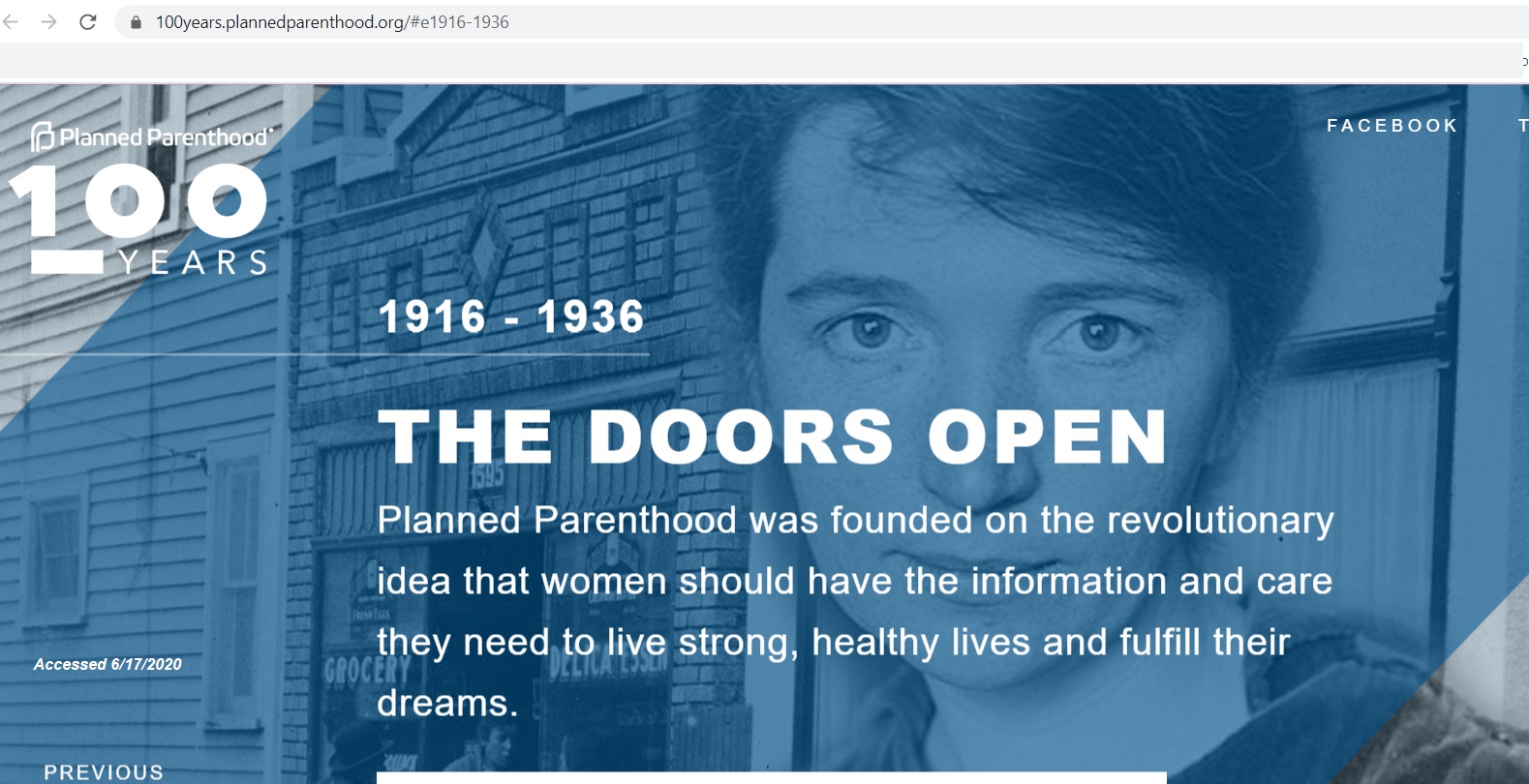 Planned Parenthood’s latest and most creative marketing strategy seems to be ‘canceling’ its own founder, Margaret Sanger. Despite attempts to put distance between Sanger and the abortion conglomerate’s modern-day operations, Planned Parenthood hasn’t really “reckoned” with racism; Sanger is just the tip of the iceberg, so to speak. After more than a century of accepting Sanger’s racist, eugenicist ideologies and lauding her as a hero, the move to ‘cancel’ her appears to be in response to the pro-life movement’s relentless exposure of the truth — not genuine regret about the corporation’s past and present racism.

This year, Planned Parenthood submitted an application to remove Sanger’s name from Margaret Sanger Square, located in front of its flagship Manhattan Health Center (previously known as the Margaret Sanger Center). A May 2021 video conference meeting discussing this application featured Merle McGee, the Chief Equity and Engagement Officer of Planned Parenthood Greater New York (PPGNY). McGee exposed the real reason for Planned Parenthood’s efforts to cancel Sanger in a time of racial tension: Sanger has been “weaponized by the anti-abortion extremists.”

“… [T]he removal of Margaret Sanger’s name from the intersection is a decision that we’ve made as a part of our reckoning with Sanger’s legacy,” McGee stated, noting that the “reckoning” is part of Planned Parenthood’s “reviving radical” initiative,.

But the question remains: Is Planned Parenthood truly “reckoning” with its heritage, or is this simply a marketing technique? 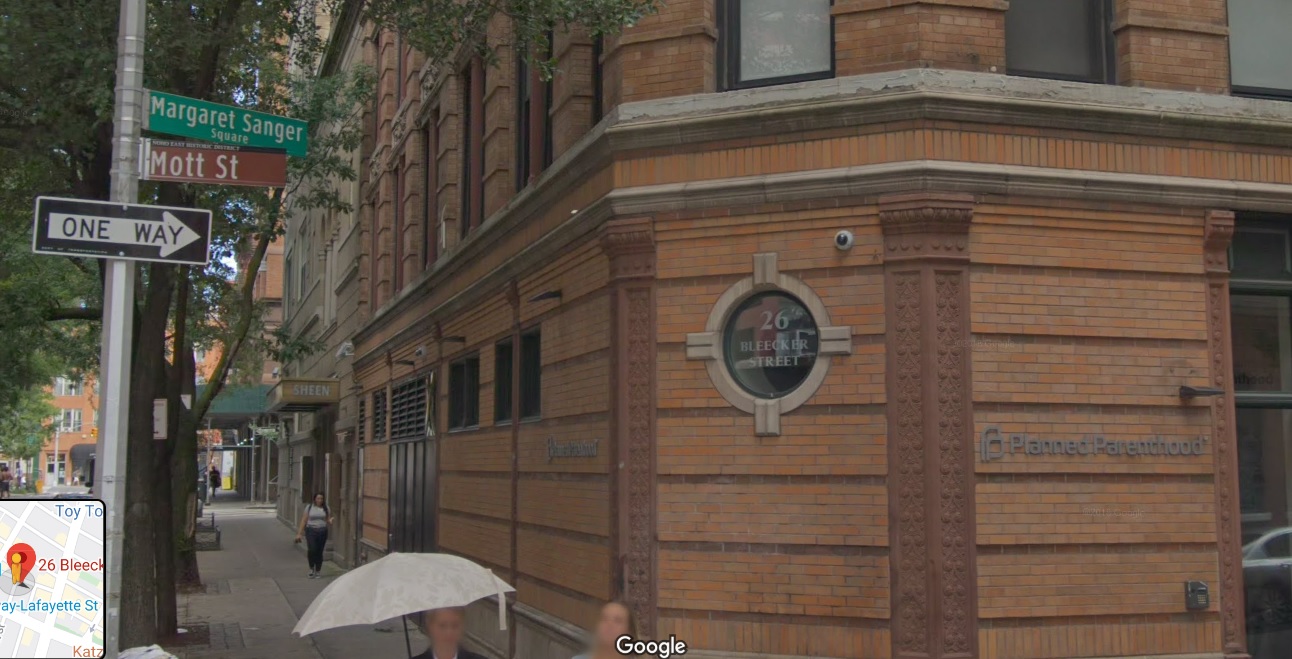 McGee acknowledged that Sanger’s philosophy of “eugenics” was “ableist and racist.” Yet, instead of openly exposing this years ago, the organization embraced and lauded Sanger, whose eugenic philosophy led to her work establishing Planned Parenthood and becoming a stalwart of the birth control movement, as well as her lesser known advocacy of euthanasia. Sanger held such a strong belief in eugenics that she embedded eugenics proponents deeply within her American Birth Control League (ABCL) organization, which became Planned Parenthood in 1942.

But McGee claimed that Sanger’s “actions some hundred years on continue to be weaponized by the anti-abortion extremists and opponents that you see outside of our health center every day.”

This remark makes it appear as if the “weaponization” of Sanger’s history is the real motivation behind the corporation’s move to suddenly make such a strident effort to cancel her. Before last year, her racist legacy didn’t seem to bother them very much.

As McGee noted on the video meeting, Planned Parenthood made one previous attempt to address Sanger’s racism — in 2016 (not 1960, 1970, 1980, 1990, or 2000). “Planned Parenthood, beginning in 2016, began to attempt to reckon with Margaret Sanger’s legacy and folks were left feeling underwhelmed by the effort at the time,” she stated.

That year, Planned Parenthood celebrated its 100-year existence, and instead of reckoning with Sanger’s racist legacy as McGee claimed, Planned Parenthood boasted that the organization was founded on the “revolutionary idea that women should have the information and care they need to live strong, healthy lives and fulfill their dreams” — complete with a zoomed-in photo of Sanger’s face.

If Planned Parenthood was actually sincere in dealing with its racist past and present, why did the corporation keep Sanger’s name on its abortion facilities until very recently? And why did now-president Alexis McGill-Johnson attempt to defend Sanger publicly?

Even when the organization had begun to scrub Sanger’s name from its website in 2019, there was no public reckoning of her racism. That did not occur until 2020, when accusations of systemic racism and white supremacy from within the corporation surfaced publicly. At that point, Planned Parenthood had to admit the racist legacy of its founder. Planned Parenthood corporate, along with at least 19 affiliates, also acknowledged a present-day problem of systemic racism within the organization.

Yet McGee claimed on the video, “It is past time we reckon with our history as an institution, and we reckon as a nation with our legacy of institutional structural and systemic racism… and this is our place, and… our moment to step into that work and show up for communities of color in the way that this institution has not in its hundred plus years.”

And yet it took all this time for the corporation to even consider questioning Sanger’s beliefs, which it had excused, justified, and downplayed up to that point.

McGee claimed Sanger’s “revolutionary idea” of eugenics was harmful to “communities of color, working class communities and peoples with disabilities because she legitimized the eugenics proponent belief in who was valuable and who was valued in our society.” In this, McGee is correct.

Clarence Gamble, a Sanger financier and Proctor and Gamble heir who served on Sanger’s American Birth Control League (ABCL) board (as well as Planned Parenthood’s), was a staunch advocate of eugenics. It was to him that Sanger penned her famous words about her plan to use Black ministers and physicians to further her eugenic agenda in the Black community (known as the Negro Project). Years later, because of a eugenics program influenced heavily by Gamble, Black men and women like Elaine Riddick were targeted for forced sterilization.

But Planned Parenthood seems positioned to pin racism on Sanger while ignoring its own complicity.

Eugenics has been a cornerstone of Planned Parenthood well beyond Sanger. The organizational aims and goals were unified with those of the pro-eugenics community. The two went hand in hand.

The opening of Planned Parenthood’s first facility in Charlotte, North Carolina, was linked to figures such as Wallace Kuralt, who headed a coercive eugenic sterilization program in the state. In 1983, Planned Parenthood of Greater Charlotte awarded Kuralt its infamous Margaret Sanger Award, according to Kuralt’s 1994 Charlotte Observer obituary.

If canceling Sanger is the response to “reckoning” with Sanger’s legacy, why isn’t canceling the entire Planned Parenthood organization the response to the organization’s own racist, eugenicist history well past the time of Sanger? The answer is because canceling Sanger isn’t about a reckoning over racism but about saving face so Planned Parenthood can continue to carry out her mission while deflecting criticism.