An unearthed pamphlet titled “Tomorrow’s Children” suggested that the way for Black people to get “better health,” “security,” and a “brighter future” was to use birth control. It was published for the National Negro Educational Program of the Birth Control Federation of America, a group which eventually became Planned Parenthood.

According to the pamphlet, birth control is the magic cure to “reduce the maternal death rate… improve maternal health… reduce the infant death rate… and raise the standard of living.”

“Such a program would conserve for race-building, the waste of Negro life…” the pamphlet claimed. To illustrate the alleged utopia that birth control would bring about, the pamphlet wove a storyline beginning with images of “unplanned families” born into the “poorest homes.” It then shifted toward the solution of birth control, which would lead to the “children of tomorrow” who would receive a “fair chance for happiness and a normal life.”

The pamphlet implies that not using birth control makes a child’s life unhappy and abnormal.

Population control zealots used slick marketing gimmicks like the pamphlet above with an underlying motive.

In 1942, the opening paragraph of a New York Times article read, “Crime, ill health and poverty in Harlem cannot be eliminated until planned parenthood is ‘fully recognized and applied’ in that overcrowded section of that city.”

In 1965, Wallace Kuralt, who served as Mecklenburg County’s welfare director from 1945 to 1972, was cited by the New York Times as praising a “one of a kind” birth control clinic in Mecklenburg County. His reasoning, according to the paper, was that “a pill program has saved taxpayers $250,000 in children’s aid….” Kuralt stated, “We are spending a dollar to save $25.”

A 2014 Slate article noted that Kuralt also believed sterilization would save taxpayer funding by reducing poverty among the “low mentality-low income families, which tend to produce the largest number of children.”

When the birth control philosophy veered toward abortion

In recent years, a different proposed solution for issues facing the poor and minority communities has emerged: abortion. Many politicians and members of the abortion industry have suggested that taxpayer-funded abortion is necessary for the equality of minorities and poor women. Despite the abortion lobby’s attempts to claim poor women need the public to pay for their abortions, they know statistics show that when abortion is subsidized by taxpayers, abortions increase.

In his book “Aborting America,” former abortionist and NARAL founder Dr. Bernard Nathanson revealed that abortion was being touted as a “cost benefit” solution to poverty for a very, very long time.

In 1966, NARAL co-founder Lawrence (Larry) Lader, dubbed the “Father of Abortion Rights,” once stated that “the percentage of Puerto Ricans, Negroes, [and] other minority groups” are the groups who need abortion the most. Lader told WNCY, “[…W]e can… no longer afford to bring into the world ten, fifteen children, most of whom will be starving not just in India, but often in our own home, [and who] will become the flotsam and jetsam of society, will become the drug addict.” Lader also considered eugenics-based laws to be “humanitarian.”

“Do you realize,” Roosa asked, “how many young unwed mothers there are in this city, simply because there was no one to teach them how to keep from getting pregnant? What’s it going to be like five or six years from now when all those children are ready for school? And if we don’t stop bringing all these babies into the world there soon won’t even be enough room for us to stand up in.”

Even Supreme Court Justice and abortion advocate Ruth Bader Ginsburg acknowledged in 2009 that abortion was created to reduce “population growth and particularly growth in populations that we don’t want to have too many of.”

The recruiting of community leaders to promote eugenics

In the previously mentioned pamphlet, Margaret Sanger, the founder of Planned Parenthood, emphasized the Federation’s goal to “bring the means of medically-approved birth control to Negro parents.”

“This program needs leadership in all parts of the community,” the pamphlet added, encouraging Black leaders to become familiar with the “Federation’s” materials to “promote a clearer understanding of birth control in your community.” 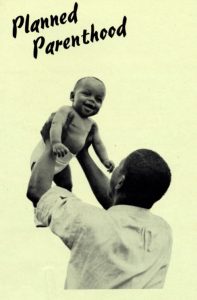 The pamphlet then instructs Black leaders to enlist churches, clubs, Black media and other organizations “in the fundamental program to enable Negro parents to have healthier babies for a better world tomorrow.”

This recruitment of Black community leaders may sound familiar to those aware of Planned Parenthood founder Margaret Sanger’s “Negro Project.” In 1939, Sanger penned her famous letter about her plan to recruit Black ministers and physicians to further her eugenic agenda in the Black community. The infamous letter was sent to Proctor and Gamble heir Clarence Gamble, who served as director of Margaret Sanger’s American Birth Control League board (as well as Planned Parenthood’s).

Almost three decades later, in 1966, Planned Parenthood’s president Alan F. Guttmacher, the former Eugenics Society VP, told an audience at the University of California Medical Center that Planned Parenthood should “involve knowledgeable leaders from the minority groups who understand and are favorable to the philosophy of birth control. They, in turn, must translate their appreciation of the contribution which birth control can make toward family stability to their own people.”Eventually, the suggestion was made to add Black members to Planned Parenthood’s board. This move took place at the same time Planned Parenthood was calling for the decriminalization of abortion.

Today, some within the Black community have partnered with the abortion lobby to fight for the taxpayer funding of abortion. They refer to abortion as “health care” or “reproductive justice,” even going so far as to label the prohibition of taxpayer-funded abortion a “tool of oppression.”

But civil rights leaders like Rev. Jesse Jackson disagreed. In 1975, he endorsed a Constitutional amendment banning abortion, and in 1977, Jackson endorsed the Hyde Amendment, a pro-life rider which prohibited federal taxpayer dollars from paying for most abortions. Rev. Jackson stated at that time (before he completely changed his stance and became pro-abortion), “As a matter of conscience, I must oppose the use of federal funds for a policy of killing infants.”

Black social activist Erma Clardy Craven, who described herself as “a liberal Democrat,” refused to buy into the propaganda of the abortion industry. She previously called out largely “upper middle-class white people” whom she claimed “have a fetish about controlling the reproductive capacities of others, especially those who are poor and Black.” In 1992, Craven denounced taxpayer-funded abortion, writing, “The pressure on welfare women today is to have abortions. The pressure is primarily from people who are making money promoting it, primarily Planned Parenthood.”

Craven was right then, and the same sentiment stands today, as Planned Parenthood receives more than half a billion taxpayer dollars every year and kills hundreds of thousands of preborn children — many of them belonging to poor and minority communities.