Katha Pollitt, a feminist writer and contributor to The Nation, has criticized Planned Parenthood New York’s decision to essentially “cancel Margaret Sanger” — its own founder — by removing her name from a place of prominence on its flagship facility in the state. For over a century, Planned Parenthood has defended Sanger, a eugenicist who believed citizens should have “licenses to breed,” and who admitted to meeting with members of the Ku Klux Klan. More recently, hundreds of Planned Parenthood staffers came forward to expose the corporation, stating that it “has a history and a present steeped in white supremacy.”

In her article entitled, “Canceling Margaret Sanger Only Helps Abortion Opponents,” Pollitt failed to call out Planned Parenthood’s systemic racism, instead criticizing the corporation for buying into “anti-choice propaganda” about its own founder.

Pollitt seems to deny reality to reach some of her conclusions.

Claim: Sanger helped American women more than anyone in the 20th century… and she “was not a racist”

The feminist writer acknowledged she took Planned Parenthood’s mea culpa about Sanger “personally,” and proceeded to defend her, declaring emphatically, “For the record, Margaret Sanger was not a racist…. Sanger was, yes, a eugenicist.”

“I’ll just come right out and say it: Margaret Sanger did more good for American women than any other individual in the entire 20th century,” she added. 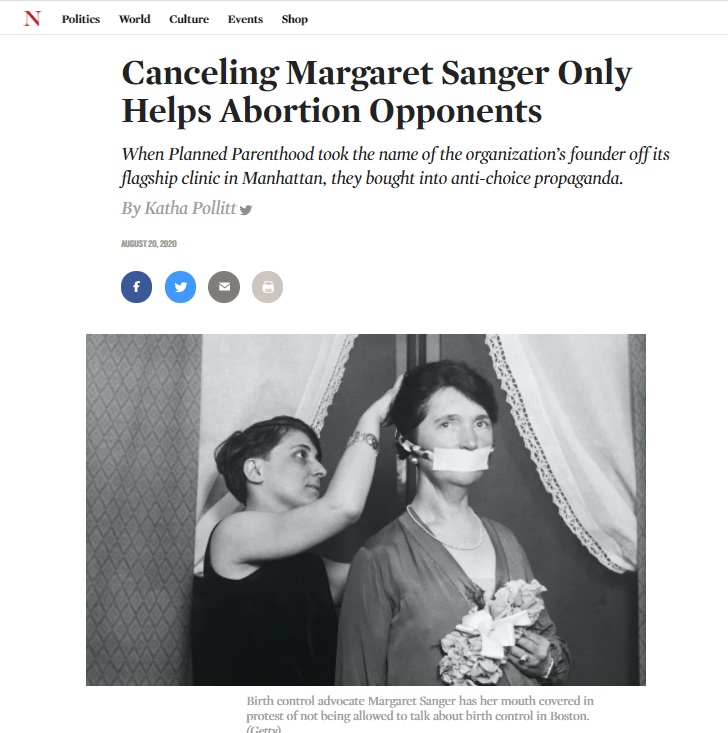 Canceling Margaret Sanger by Katha Pollitt in the Nation

Pollitt questioned Planned Parenthood’s erasing of Sanger as simply an “olive branch to Black staffers or part of a deeper self-investigation” but she bemoaned that, “there’s no question that the main winners here are abortion opponents.”

“For decades,” she wrote, “they’ve claimed that Sanger was a racist bent on Black genocide and that Planned Parenthood is carrying out that mission today. In 2016, Planned Parenthood released a historically accurate, fair, and complex statement refuting that absurd claim, but why would anyone pay attention to that now?”

Pollitt is correct about one thing: it has been pro-life advocates — not journalists like herself — who have repeatedly exposed Planned Parenthood’s eugenic and discriminatory roots. Only in the face of civil and racial unrest, where the ugly facts became undeniable, did Planned Parenthood falsely claim that it needed to “reckon” with its racist past.

Live Action News has documented for years how Sanger promoted the idea of forced sterilization yet failed in her goal of merging her American Birth Control League (later Planned Parenthood) with the American Eugenics Society. Many of Sanger’s American Birth Control League board members were also eugenicists. Among them were Lothrop Stoddard — Exalted Cyclops of the Massachusetts chapter of the Ku Klux Klan — and Planned Parenthood’s first physician president, Alan F. Guttmacher. Planned Parenthood’s aims and goals were shared with the pro-eugenics community. The two went hand in hand.

One of Sanger’s financiers, Proctor and Gamble heir Clarence Gamble, also served on Sanger’s ABCL board (as well as Planned Parenthood’s). Gamble was a staunch advocate of eugenics, and it was to him that Sanger penned her famous words about her plan to use Black ministers and physicians to further her eugenic agenda in the Black community (the Negro Project). Years later, because of a eugenics program influenced heavily by Gamble, Black men and women like Elaine Riddick were targeted for forced sterilization.

Claim: Sanger was ableist and against all poor people, not just Black people

While Pollitt acknowledged Sanger’s eugenic ties, she claimed Sanger “did not single out Black people” but instead targeted “poor people” who “had too many kids to care for properly.” Pollitt claimed eugenicists of Sanger’s day saw eugenics as “more about ableism, based on the belief that poverty, crime, prostitution, and promiscuity were the result of inferior genes.”

Despite Pollitt’s revisionist history, notable Black leaders of the past warned that abortion and birth control would be used as a tool of Black genocide.

Pollitt lashed out at modern-day Black pro-life leaders who have claimed, “The most dangerous place for an African American is in the womb.” Yet abortion statistics reveal abortion’s devastating and disproportionate impact upon the Black community. In 2016, while Black Americans made up just 12% of the U.S. population, they accounted for 38% of reported abortions.

Estimated Black abortions outnumbered the top nine leading causes of death for Black Americans combined, and were 24 times greater than homicides committed on Black Americans that same year. Recent research revealed that Black women who aborted their first pregnancies were more likely than other races to have subsequent abortions.

Claim: Sanger wasn’t bad because all these other people were eugenicists, too

Pollitt attempts to excuse Sanger’s legacy by pointing out other notables involved in eugenics such as George Bernard Shaw, Havelock Ellis, John Maynard Keynes, Winston Churchill, as well as Gunnar and Alva Myrdal. Yet Pollitt failed to connect any of them to Planned Parenthood.

The closest link among them all was Havelock Ellis, a friend and rumored lover of Sanger’s who once reviewed “The Rising Tide of Color,” a blatantly racist book authored by Sanger’s board member Lothrop Stoddard. Sanger published Ellis’ review of the book in the October 1920 edition of her Birth Control Review. Ellis wrote, “Dr. Stoddard possesses, however, all the temperamental optimism and self-confidence of the white Nordic man whose champion he remains throughout…. Since by the prejudice of color, we must mostly be on his side in this matter, we may profitably meditate on the reasonable considerations he brings forward….”

Gunnar Myrdal authored the 1500-page book, “An American Dilemma: the Negro Problem and Modern Democracy,” paid for by the eugenics-based Carnegie Corporation. According to the documentary film Maafa21, Gunnar and his wife Alva were closely linked to a Swedish eugenics program that forcibly sterilized 66,000 people. Alva was published in Margaret Sanger’s Birth Control Review and was later honored by Planned Parenthood. Prior to Gunnar’s book, Alva attended an American Birth Control League Convention.

Myrdal believed that birth limitation within the Black community was necessary. He wrote, “… if the Negro is to be eliminated, he must be eliminated slowly so as not to hurt any living individual Negroes.” The solution for Myrdal was that “… birth control facilities could be extended relatively more to Negroes than to whites, since Negroes are more concentrated in the lower income and education classes….” (emphasis added)

Based on Myrdal’s comment, Pollitt’s claim that Sanger wasn’t “anti-Black” but instead just “anti-poor” seems naïve at best.

Pollitt was not joking when she claimed she was taking the attack on Sanger personally, asking, “What am I supposed to do now with the two Planned Parenthood Maggie Awards I’ve won for articles on reproductive rights?”

Pollitt wrote affectionately of Sanger, “She was a whirlwind of energy who changed our understanding of womanhood, sex, and marriage so fundamentally, we can barely picture what life was like before her.”

Well, we certainly know what life has been like since Sanger.

Pollitt’s closing statement in The Nation is written as if it originated from a person incapable of accepting the fact that while she was clinging to her Planned Parenthood awards, the dark racism of the abortion organization eluded her completely: “There are so many ways of forgetting where we have been. Planned Parenthood has just made doing so a little easier.”