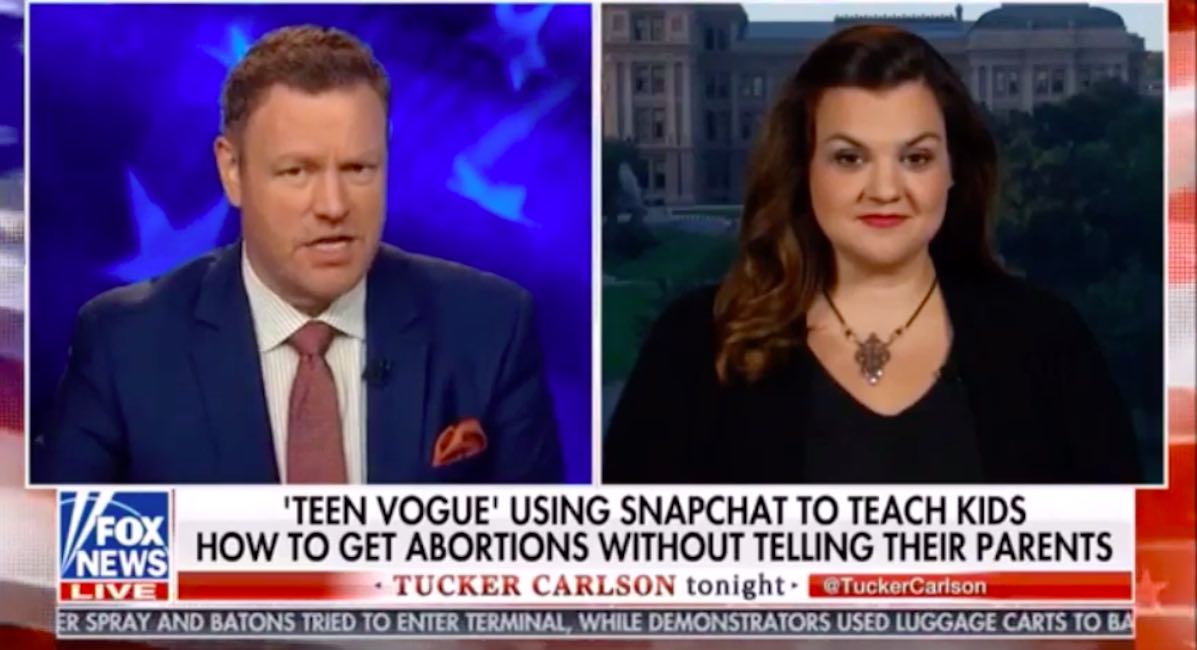 Live Action News recently reported on a disturbing Snapchat story from Teen Vogue instructing teens on how to get an abortion without parents’ permission or knowledge. The snaps were posted last weekend following an article by the same name. In the article, advice columnist Nona Willis Aronowitz responded to the question, “I’m 16, I’m pregnant, and I don’t want to be. I’m not sure if I’m allowed to get an abortion without my parents’ permission, but I’m really scared to tell them because they are both against abortion. What should I do?”

Is this a real question from a 16-year-old? We can’t be certain. Former Cosmopolitan writer Sue Ellen Browder noted in her 2015 book, Subverted: How I helped the Sexual Revolution Hijack the Women’s Movement, that she often made up questions by fictional readers to answer in her opinion pieces for the women’s magazine. She did this to soft-sell premarital sex, birth control, and abortion to single women. Perhaps this question was mean to sell abortion.

READ: Teen Vogue tells minors on Snapchat how to get abortions without telling parents

In any case, Aronowitz’s response to the question posed was frighteningly irresponsible at best. She wrote, “It’s only logical that if teens are mature enough to become parents, they are mature enough to decide whether or not they want to give birth. Having access to abortion should be your right, regardless of your parents’ beliefs.” Realizing that her recommendations are quite literally against the law in multiple states, she went on to write with almost comic understatement, “Unfortunately, not every state legislature agrees with me.”

In the segment, Johnson said, “This is exactly what Planned Parenthood and the abortion industry and the abortion lobby, which includes ‘Teen Vogue’ has been trying to do for years, except that right now, they’re even more brazen about it. Now we don’t care about women being safe, we don’t care about clinics being clean, it’s about access, and now they are getting to our children through school sex education and through grooming our children.” Teen Vogue certainly does have a history of promoting abortion in its publication.

Johnson has plenty of evidence to back up her claims. Live Action News has repeatedly reported on Illinois’ dangerous new abortion law that does away with abortion facility inspections and even prohibits the public from getting 911 records when abortion patients are taken to the hospital, making it clear that safety certainly isn’t paramount. Abortion facilities in multiple states have been cited or fined for using bloody, dirty, rusty, unsterilized equipment, so cleanliness isn’t too important to them, either. But when it comes to access, we’ve finally found the linchpin to understanding the abortion industry’s political and cultural goals. And it all starts with children.

Planned Parenthood’s sex education programs have been rejected in various school districts for failing to decrease sexual activity amongst grade schoolers, mixing politics with education, and more. Despite the #MeToo movement’s goals, Planned Parenthood and the abortion industry continue to brainwash young people to be “accepting” of all manner of dangerous, bizarre behaviors. Abby Johnson was right. They are being groomed by an industry that will profit from their future actions.