On the surface, the Whatcom Family and Community Network seems like a robust community resource, providing all sorts of help to local families in the Whatcom County, WA area. Its purpose is admirable: helping those who are poor find help, providing anti-bullying programs, working to prevent alcohol and drug use in teens, and running a suicide prevention program. It also has teen counselors, and therein lies the problem. These teen members teach sex education–and they use Planned Parenthood’s version to do it. And American taxpayers are helping to foot the bill.

The parent, Jill Sawicki, was a mom trying to get insight into what the sex education classes entailed. The Daily Caller reports that Ferndale High School had sent a parent letter home in November, explaining that in health class, a sex education unit was to be taught by Whatcom Teen Council members. But the parent letter did not report the Planned Parenthood connection. The Daily Caller states:

The letter described the council as “a peer education group that consists of highly trained local teens who go into classrooms and teach high school peers with support from their supervisor,” according to a description sent Wednesday to The Daily Caller News Foundation.

After receiving the letter, parent Jill Sawicki sought to look into what the council would actually be teaching, and asked the teacher if she could sit in on one of the sexual education classes. The teacher agreed.

The Teen Council members covered topics like birth control, sexual orientation, and gender identity. Sawicki was troubled by what she heard. The Daily Caller reports that “they knew almost nothing about the subjects. Sawicki recounted that the students simply read off script cards, and when members of the class asked them questions, they could not answer competently.” The story continues:

The Whatcom council members also provided faulty information, including listing Natural Family Planning as having a low effectiveness rate, failing to classify which types of contraception protects against STDs and not explaining the risks of using hormonal contraception, according to Sawicki.

After her experience, Sawicki met with a Planned Parenthood representative to discuss the course. After disagreeing about statistics and teaching methods, the representative successfully lobbied the teacher to get Sawicki kicked out of the classroom. Sawicki was barred from sitting in on subsequent sex education classes, according to Planned Parenthood employee Jill Sprouse.

Teen Council looks to be the latest way that Planned Parenthood is inserting itself into public schools. Using the positive connotations associated with peer mentoring, Planned Parenthood barrels into schools using teenagers as their pawns in order to rewrite the narrative of sex education. Whatcom’s listing of its groups clearly shows its association with the abortion giant, though that information was not included in the parent letter. 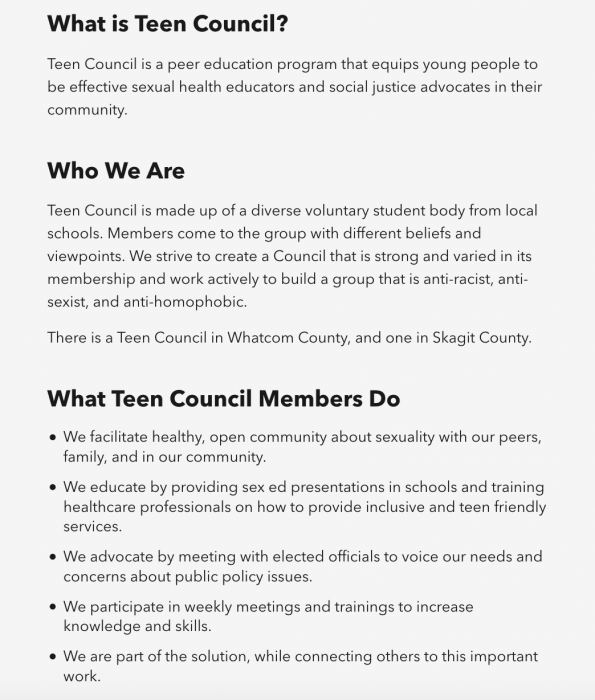 The manual for those starting a Teen Council includes a sample lesson plan on sexually transmitted diseases. That lesson includes a game of figuring out which behaviors carry a high risk of contracting an STD.

Planned Parenthood continues to be on the forefront of normalizing inappropriate sexual behaviors in teens. This list of what, apparently, are normal behaviors is also suggestive, and disturbing to parents.

In the area where Sawicki attended a class, the Whatcom Teen Council sponsor is Clint Weckerly, who is currently the Migrant Academic Coordinator at Northwest Educational Service District 189. His former university, Western Washington University, also listed him as Community Health Educator for Mt. Baker Planned Parenthood; it is not clear whether he does both, or if he simply leads Teen Council now.

Weckerly has certainly taken “education” to new levels with his work with Planned Parenthood–but it’s a level many parents wouldn’t want education to go to if they had an understanding of it. It seems that lobbying for Planned Parenthood is a significant factor for Teen Council members.

Weckerly used the popular fundraising site, GoFundMe to raise money for the members of Teen Council to go to Washington, DC on a school trip in 2016. According to the GoFundMe site Weckerly set up for the trip (emphasis added):

Our mission is to empower, to educate and inspire those we know, including our peers, our families and our communities. We educate about human sexuality & healthy decision-making. We use our voices to advocate for just and humane sexual attitudes and policies…. We also believe in the power of youth voice in the reproductive justice movement and, every year, we spend MLK Day weekend lobbying in Olympia for the world that we so believe in. Now, we’re ready to take that fight all the way to DC!

Indeed, they raised the money, and then some. And the last picture on the site is of Teen Council in DC, which reads, “Thank you for helping us to realize this dream!  Your support helps us become the leaders we are destined to be!” In the picture, students are wearing Planned Parenthood t-shirts. 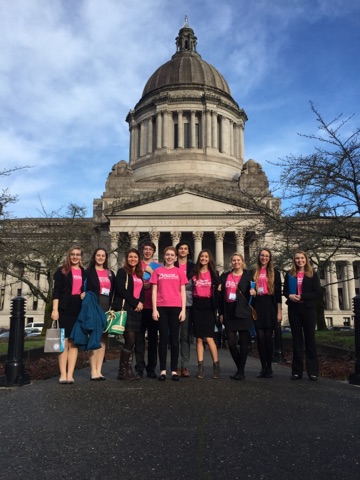 And Weckerly makes no bones about overt support for Planned Parenthood. On his fourth update on the fundraising site, he posted this: 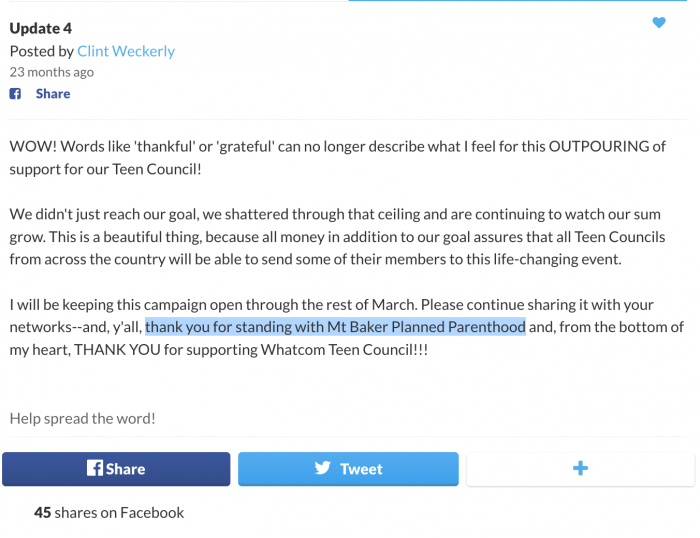 This leads to the question of whether Teen Council is actually about education or about indoctrination. The abortion corporation says it has 382 peer educators and 36 chapters in 14 states. Those 36 chapters gave 1,627 formal presentations and 17,584 informal education sessions. Those numbers represent the evangelization of the abortion corporation more than anything; thus, it is not surprising to see the reported results:

Learning something new might mean something helpful, or it might mean learning about a sexual act they had not considered, simply based on the one sample lesson included.

Of course, it’s also not surprising that 82 percent of audience members–those would be teenagers for the most part–“learned where to go for sexual health services.” There’s only one place that Planned Parenthood tells people to go, and that’s right through its own doors as Planned Parenthood customers.

Teen Council breeds Planned Parenthood clients more than it creates empowered and educated teens. And the most stunning part? The American people are paying for it. The United States Department of Health and Human Services Office of Adolescent Health provides a grant of $1 million to the Planned Parenthood affiliate that pioneered Teen Council. Teen Council says it is funded by grants, but it’s unclear how much is funded by taxpayers versus private organizations.

One thing is clear, however, teens are being taught every form of sexual behavior and then given a “resource” to help them facilitate their behavior, which is, of course, Planned Parenthood. And public schools have swung open their doors to let this abortion business advertise during school hours, as well as recruit new voters and lobbyists to its cause.  And now a parent can’t even sit in on a class without being booted right back out after she questions Planned Parenthood. In typical fashion, once the abortion profiteer enters, there is no room for another narrative. It rewrites them all–at taxpayer expense.