The Thomas More Society law firm based in Chicago intends to fight Illinois’ sweeping new abortion law — and this week, the firm held a webcast laying out plans to do just that. But beyond this plan, what was presented is nothing short of shocking; the new Illinois Reproductive Health Act (RHA) stipulates that even 911 call records to abortion facilities will no longer be accessible to the public under the Freedom of Information Act — deliberately hiding information on the dangers of abortion from the public. In addition, no state abortion data whatsoever will be made available to the public.

Peter Breen, vice president and senior counsel of the Thomas More Society (TMS), offered a comprehensive overview of the almost unimaginably broad scope of the RHA, including even more repealed safety measures than pro-lifers were likely aware of when the bill was introduced and debated. Breen then spoke about the legal vulnerabilities in the RHA, given existing Illinois state law as well as federal law. Finally, he issued an appeal to Illinoisans to join the legal fight against the RHA by serving as plaintiffs or medical advisors in court cases that will be introduced.

What did the Reproductive Health Act actually do?

Breen spoke first about the sweeping impact of the RHA on the practice of abortion in Illinois. Breen said the RHA: 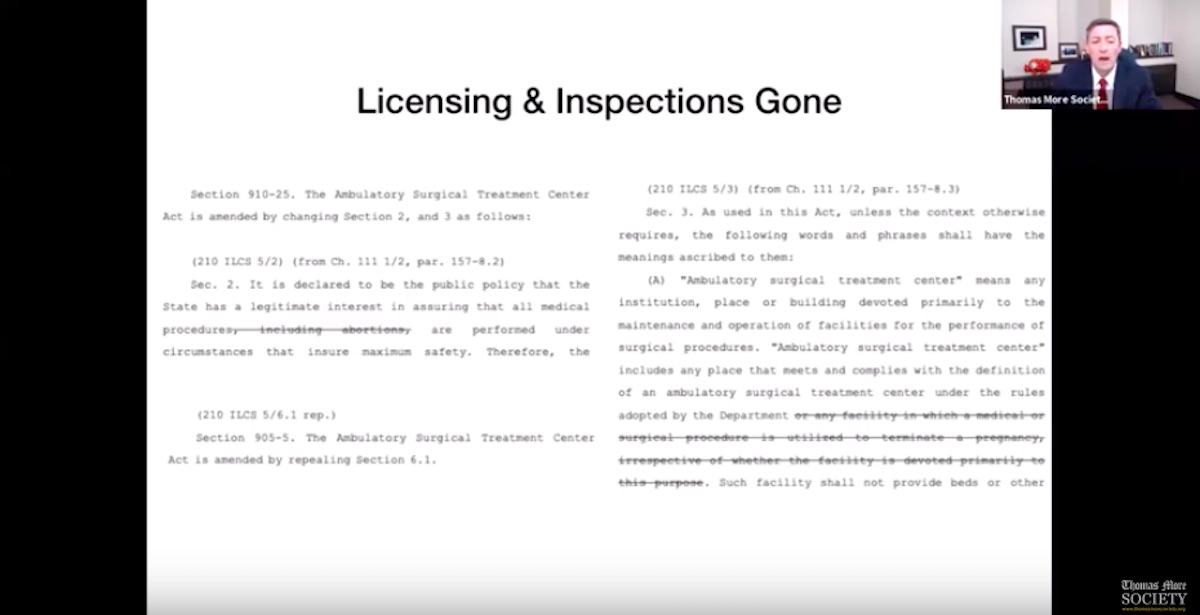 Thomas More Society webcast screenshot. “Including abortions” is removed from the paragraph at left regarding medical procedure safety.

What’s the plan to fight back against the Reproductive Health Act?

Breen shared that the main approach to overturning the RHA will specifically target the requirement for insurance plans to cover elective abortions. A two-pronged strategy will target the RHA’s incompatibility with current Illinois law and federal law, which always supersedes state law according to the U.S. Constitution’s Supremacy Clause.

First, the Illinois Religious Freedom Restoration Act says “the government may not substantially burden a person’s exercise of religion” unless there is a “compelling governmental interest,” and that the “least restrictive means” of furthering that governmental interest are being used. TMS will argue that forcing Illinois taxpayers to subsidize elective abortions constitutes a substantial burden on their right to exercise their religion. Ultimately, courts will have to address the question of whether private insurance plans will be forced to fund elective abortions.

Second, the Health Care Right of Conscience Act says “it shall be unlawful for any public official… to coerce, disqualify, or discriminate against any… health care payer” for refusing to pay for any procedure that violates their conscience. Breen believes this Act may cover any objecting individuals who purchase insurance in Illinois.

Finally, Breen cited the Weldon Amendment, which prohibits a state government from receiving federal funds if they discriminate against health insurance companies that refuse to provide abortion coverage. Breen said that this translates to billions of dollars in Illinois’ yearly revenue.

The Thomas More Society seeks plaintiffs to represent in lawsuits against the RHA:

The Thomas More Society also seeks to hear from healthcare professionals, especially those with obstetrics/gynecology (OB/GYN) experience, either to serve as plaintiffs or to offer medical expertise in the cases that do go forward.