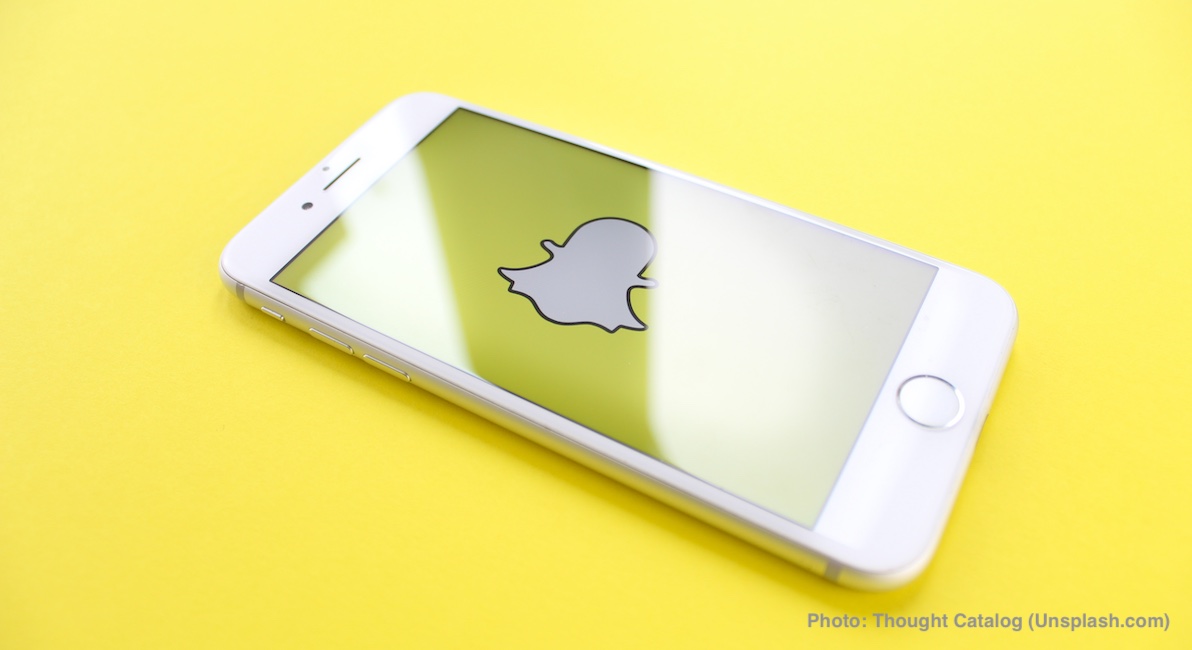 Over the weekend, Canadian pro-life group Choice42 founder Laura Klassen shared a post on Facebook which included screenshots from Snapchat, another popular social media app. The images were shared on Snapchat by Teen Vogue, which has a history of cheerleading for teenage sexual activity and abortion. The images instruct minors on how to obtain abortions without their parents’ knowledge or permission.

Predictably, pro-abortion commenters have flooded the comments section of Klassen’s post with high praise for Teen Vogue’s instructions, with trolling comments like, “Wow! What a great resource for young women to retake control over their own bodies!” and “I keep meaning to get a subscription for them, this was a good reminder to get it done,” as well as “Wow, Thanks for the information! I will be sure to make sure my daughter reads!” However, others have expressed the idea that parents of minors, who are responsible for their children’s health care, have the right to know if their child is having a medical procedure — especially one that could negatively affect their health as well as take a human life. Abortion is not like any other “medical procedure,” because abortion deliberately takes a human life.

In the Snaps, Teen Vogue tells teens, “Having access to abortion should be your right, regardless of your parents’ beliefs. Unfortunately, not every state legislature agrees…” and then goes on to instruct teens how best to skirt their parents’ authority. 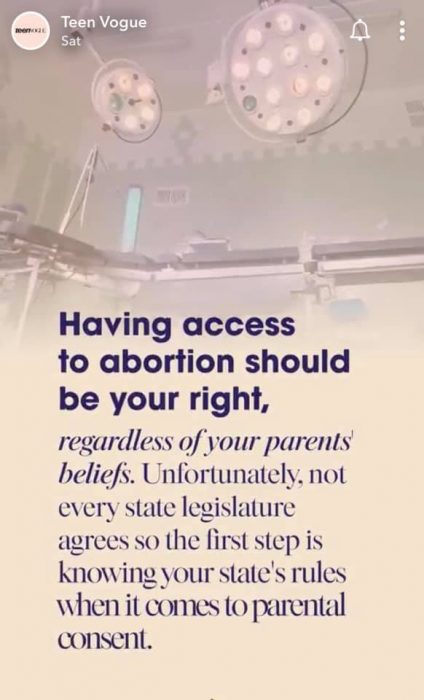 “You know your parents best, and if you feel their reactions might be hostile, you should act accordingly,” says another Snap. “Regardless, it’s always best to tell your parents as long as you feel safe. No matter what your parents’ abstract views are, they might behave far more tenderly when their own child needs access to abortion care.” A Snap following that one tells teens they can obtain a judicial bypass from a judge to get around parental involvement laws, and encourages them to contact an abortion fund to help pay for it if they don’t have the money. 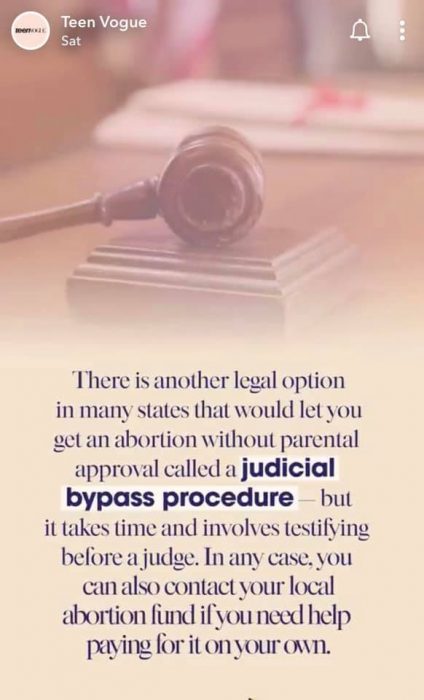 Teen Vogue has a history of instructing teens on how to sneak around and get abortions behind their parents’ backs, as well as promoting abortion as something comical. They’ve also showcased abortion facility escorts as heroic, promoted post-abortion gift-giving, and lied to girls about the serious effects of the abortion pill.

If anything, teens and parents should be encouraged to be more involved in each other’s lives, because when unplanned pregnancies occur, a supportive and caring family can make all the difference for a terrified girl. Anyone who wants to pit children against their parents is no friend to families. All they’re doing is helping the abortion industry to make more profits.