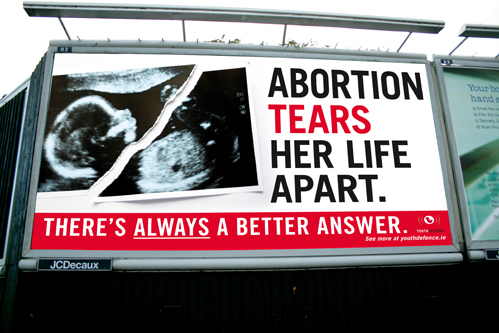 President-elect Donald Trump’s recent comments that without Roe v. Wade, women might have to travel to other states for abortions did not sit well with Catherine Pearson of the Huffington Post (a publication so bitterly anti-Trump that it attached a disclaimer calling him a “misogynist,” among a litany of hyperbolic names, to all of its Trump “reporting”).

HuffPo’s “Women & Parents Senior Reporter,” in a post that most certainly doesn’t sound like reporting, calls Trump’s answer “utter BS” and an “absurd suggestion,” and attempted to explain why “that is a terrible “solution’”:

“The current lay of the land is that in the northeast and along the west coast ― with a few places in the middle of the country, like Illinois ― access to abortion has been somewhat protected,” Elizabeth Nash, senior state issues manager with the Guttmacher Institute told The Huffington Post. “Around the rest of the country, access is, mostly, much more limited.” If Roe v. Wade were overturned, and if certain states banned abortion, the country would have a much more bifurcated system than it already does, she said […]

“An abortion [typically] costs around $500 and many people cannot come up with that kind of money immediately,” said Nash. “If women have to travel, then they have other issues, like needing to take time off from work and arrange for childcare, because we know that 60 percent of women who have abortions already have a child.” Women may lose wages when they take that time off, she added, and then have to pay for a hotel or a plane/train ticket on top of the procedure itself.

Not mentioned: the part where any of this should bother anyone.

Tellingly, these are only “bad things” if one presupposes that abortion availability is a good thing. But for the rest of us who are unconvinced of Pearson’s personal beliefs, increasing the costs or logistical difficulties of getting one is not a concern, because we think abortion is unjust for killing babies and ultimately harmful to women in the long term. This is what should really bother us:

This HuffPo article is a golden example of something many others have observed since Trump’s shocking victory over Hillary Clinton last week: that one of the reasons why abortion supporters and their allies lost (and why they’re not taking it very well) is because they’ve come to spend so much time talking to each other and playing to the biases of people who already agree with them that they’ve forgotten how to connect with or appeal to people who don’t already love abortion.

So abortion advocates spend all their time trying to gin up outrage over the ease of abortion access when they have yet to win the argument over whether abortion should be accessed at all. Which is unfortunate for them, since as I explained last week, overturning Roe won’t automatically ban abortion in most states; it’ll just give the voters a say in where and whether it stays legal. When that happens, some persuasion skills would really come in handy, but abortion supporters spent years letting those persuasion skills atrophy because judicial intervention did all the heavy lifting for them and let them skip the “winning the debate part” entirely. How’s that for poetic justice?

In addition to my previous points about overturning Roe being the only legally honest option given what the Constitution actually says, this would be a good opportunity for a refresher on the concept of federalism—you know, precisely how our system of government is supposed to work. The country adopts a uniform standard for the most fundamental and unavoidable national concerns, like national security or our most basic civil rights, but leaves everything else for states to decide for themselves.

That’s meant to apply to virtually everything that affects our lives, including things with far more direct impact than whether we can get abortions: how our schools and healthcare systems operate, how much money the government takes from us, how harshly crime is punished, how heavily employers are regulated, how we handle drugs, crime, and a million other questions. Why? So a population as big and varied as America’s can live united under a single set of core values, while leaving different communities free to express their own values and experiment with different ideas.

Shouldn’t abortion advocates, of all people, appreciate the genius of federalism, considering their zest for “celebrating diversity” and disdain for “imposing morality”? (Rhetorical question, I know. They only truly appreciate whatever gets their favored results.)

Under our Constitution’s federalist system, the answer for anyone living in a pro-life state who fears the difficulty of getting an out-of-state abortion is not simply to scrounge up the money when the situation arises, but to decide in advance whether it’s worth it to move to a state more accommodating to one’s pro-abortion priorities. If you decide the trade-off isn’t worth it, well, that’s a good opportunity to reflect on the fact that unwanted pregnancies aren’t actually all that difficult to avoid in the first place.

At least, that’s the answer until the day finally arrives when we fully protect preborn babies’ right to life at the federal level, whether through a constitutional amendment or act of Congress in a post-Roe world. If you think HuffPo is bad now, just imagine how much worse the wailing will get when that happens.