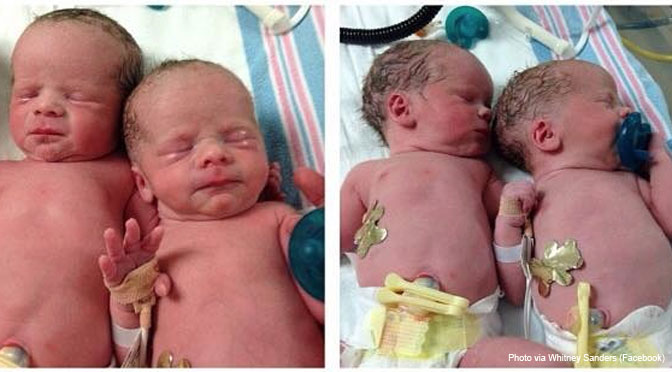 One Facebook mom decided to show the world why the abortion debate is personal to her. Her twins were born at 36 weeks, and yet, abortion is still legal up until the moment of birth in a number of states.

“Bernie and Hillary are both in support of late term abortions. Bernie opposes any restrictions on abortion in general. Under such laws, up to 36 weeks, abortion would be legal. You ask me why I care so much? Meet my 36 weekers.”

In fact, only four states ban late-term abortion, with the only exception for the life of the mother.

Nine states require that “a second physician certify that the abortion is medically necessary in all or some circumstances” before a late-term abortion can be committed, and seven states allow exceptions only for the life or the actual physical health of the mother.

But, due to broad exceptions for fetal abnormality, rape and incest, and the widely interpreted “health” of the mother (which, under many interpretations can even include financial health), the majority of states still allow abortion until the moment of birth.

** Live Action News has confirmed that mother Ashley Costanzo is the original author of this Facebook post on late-term abortion that has gone viral. A number of other parents have copied Ashley’s quote, along with photos of their own preemies, and posted it to their Facebook pages. LAN will be sharing Ashley’s story shortly.