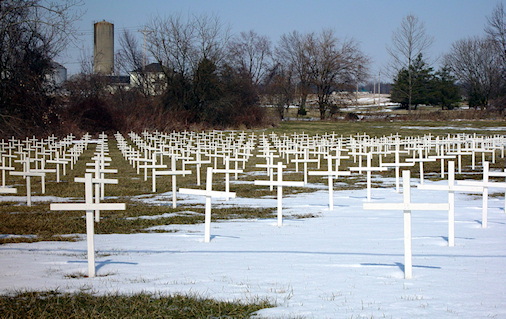 A memorial in every state?

I used to live thirty minutes outside Washington, D.C. During that time I decided to take the Metrorail into the district to visit the United States Holocaust Memorial Museum. When I walked through the exhibits, I was struck by haunting pictures of beautiful Jewish men, women, and children. I was stunned as I watched video clips of bodies being thrown into pits by the hundreds. My heart was heavy, and my soul grieved for the loss of millions of people I’d never met.

The Holocaust Museum provides more than a history lesson. It gives people a place to grieve the loss of precious lives. Names are remembered, survivor testimonies are told, and countless tears are shed. After leaving the museum, I felt numbed by mankind’s capacity for wickedness while empowered to stand against injustice in my day.

When we look at the issue of abortion, we see that the death toll is staggering. Some estimate that over 54 million babies have died from legalized abortion in the U.S alone. Unlike the Jews who died in WWII, the innocent children  killed in the womb leave behind no memories. In many cases, the only ones who remember the loss of a child are the parents who chose abortion. These parents can suffer feelings of great regret and shame long after their abortion.

The National Memorial for the Unborn, located in Chattanooga, Tennessee, is a place where parents come to mourn their deceased children. The memorial is built on a site that once held Chattanooga’s only abortion clinic. Over 35,000 babies were aborted on those grounds. On the property is a fifty-foot granite “Wall of Names” which is made up of brass plates with the names of children who have died. There is a “Remembrance Garden” and a Pool of Tears that is dedicated to the memory of babies lost through miscarriage.

Recently articles have been released about a new pro-life memorial that is proposed to be built in Wichita, Kansas. The World of Life Church has plans to build a “National Pro-life Memorial and International Life Center.” Blueprints for the memorial include a garden of crosses to represent the holocaust of the unborn, as well as a replica of the Wailing Wall found in Jerusalem.

Plans for the memorial have already stirred up controversy among Jewish leaders. Rabbi Micheal Davis of Congregation Emanu-El in Wichita has a problem with the proposal. He told the Daily Jewish Forward, “I see it as another example of a non-Jewish group taking a Jewish symbol and reinterpreting it for their own private use and thereby bastardizing it.”

Reaction to the memorial is premature, since the idea is only still a vision. The leader behind the memorial project is a controversial activist, and the proposed goal of raising 20-40 million dollars is unlikely to be met.

Even those in the pro-life community question the memorial. Popular writer Jill Stanek asked her readers:

I’m not sure this memorial will ever be built, or that Wichita is the right place for such a memorial, but nevertheless, is adding a Wailing Wall going too far? Is it right to co-opt a sacred Jewish site?

Most of the opposition towards the Wailing Wall memorial centers on the question of whether or not it’s offensive to use a Jewish landmark in reference to abortion. That is a serious question we should ponder. It’s important to stand against abortion while still being sensitive to those around us. A more general question I have is this: should there be more places for post-abortive families to grieve the loss of their children?

Across the nation there are a few sites, from a memorial for the unborn gravestone in a California cemetery to 350 crosses commemorating the loss of babies through abortion at the Cemetery of the Innocents at Clarion University in Clarion, PA. Are these memorials an important, necessary part of the healing process for those who have suffered loss through abortion?

In an article titled “Gift of Closure,” R.N Leslie T. Dean writes about her time at the Chattanooga Memorial for the unborn :

After I came to terms with what I had done, I found healing and peace. But I wanted finally to give “life” to the baby I had denied for so long. This memorial provided me with that opportunity. My baby now has a name, and I have closure — at last.

We may never know the impact that these memorials to the unborn have on the families of babies lost to abortion. Some have made decisions for Christ, some have restored their families, some have sought counseling for dysfunctional lifestyles, and some have turned from depression and thoughts of suicide to optimism and hope. There is no way to know how many people have been helped, but we do know that God knows and cares about every one of them.

I agree with Leslie. If memorials for the unborn provide places for regretful post-abortive families to mourn their children and gain closure, then perhaps we should have one in every state. What do you think?