Violence against pro-life groups and individuals has been underreported by mainstream media outlets even though it occurs on a fairly regular basis and has for decades. While pro-life activists and organizations have received their share of threats (phone calls, mail, personal threats, online, etc.), more serious attacks of vandalism and even violent assault take place against pro-lifers with little mention in the press.

The false painting of pro-life groups as hateful and violent even led to a deranged gunman seeking to shoot staff at the pro-life Family Research Council. In 2009, Harlan Drake shot and murdered pro-life activist James Pouillon, while Pouillon displayed images of babies outside a Michigan school. Recently a man was indicted on federal charges after threatening to kill or rape members of Operation Rescue. Other threats to pro-lifers involving guns — including one by an abortionist — have thus far ended peacefully.

Live Action News previously documented an act of arson committed against Janet Folger Porter, who wrote about the incident in her book, True to Life, where she published this image of her car which was burned: The abortion lobby, with the help of complicit pro-abortion media has portrayed pro-lifers as “violent” with regularity. The effort is led by the National Abortion Federation (NAF), which collects alleged “violence and disruption” claims from abortion providers and publishes them annually. While there are serious incidents listed, the report lacks evidence that every alleged act is being committed by pro-life advocates and not a disgruntled employee, angry family member, or random criminal. In addition, NAF pads the numbers by including incidents of non-violent civil disobedience and protest.

Unfortunately, while pro-life groups focus on rescuing babies and helping their mothers, to my knowledge, there is not currently a national system to report pro-abortion violence. However violence has been documented by Live Action News and other groups.

Brian Clowes at Human Life International collected data on pro-choice violence for many years. According to a report from Life News, Clowes published 1,200 pages of descriptions and documentation. The research, no longer published online, tracked violence committed by abortion providers (some in prison for murder), by pro-choice men who assaulted or murdered girlfriends for refusing to submit to abortion, and by pro-choice supporters who attacked pro-life sidewalk counselors.

“If people truly understood how backwards the media narrative is regarding the supposed intolerance and violence of pro-lifers, compared to that of ‘pro-choicers,’ we would be having a very different conversation about abortion in our nation today,” Clowes once told the Susan B. Anthony List. 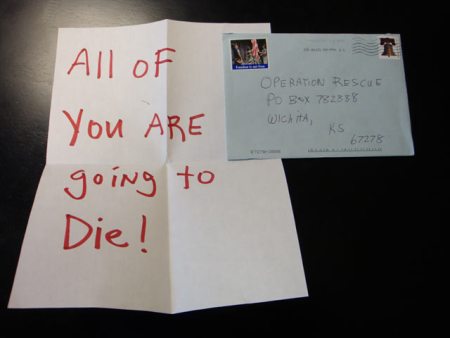 The pro-life group Life Dynamics recently issued a report that shows abortion providers have been sexually assaulting and raping their clients for years. “In my 1996 book, Lime 5, I referenced more than 30 documented criminal cases in which abortion clinic doctors had been charged with raping or sexually assaulting their patients. In just these few cases, several hundred women were known to have been victimized,” president Mark Crutcher noted. There are also many other reported cases.

Of course, the abortion industry has known for years that forced abortions are a problem – there have even been discussions about it at National Abortion Federation conferences. The discussions at these meetings reveal that the same people who advocate for “choice” to the media, politicians, and the country – [have] a stance of “convenient indifference” when it comes to women being forced to get abortions. They acknowledge its existence and talk about it in disapproving tones, while making it clear that they feel no obligation to let it influence the way they deal with these women.

In the interest of full disclosure, I conducted research for Life Dynamics’ “Under the Radar” report documenting how women who refuse to submit to abortion are attacked or assaulted. As the report details, the media is quite silent about this form of abortion-related violence:

[W]hen we were able to obtain copies of police reports, indictments, court records or other similar documentation for these cases, they would almost universally show that when a perpetrator is confronted by an unwanted pregnancy, his first response is not violence but a demand that his partner have an abortion. When violence ensues, it is inevitably a reaction to her refusal to comply.

However, the media’s coverage of these incidents often contains no mention of abortion. Instead, they either portray women who are attacked for refusing to have abortions as women who are attacked for getting pregnant, or they characterize the incident as one of simple “domestic violence” in which the victim’s pregnancy is basically inconsequential.

While the media touts pro-abortion violence statistics, consistently left out is the fact that women are injured and even killed by the abortion industry — Laura Hope Smith, and like Planned Parenthood patients Cree-Erwin and Tonya Reaves. I attended the funeral of Carolina Gutierrez and previously detailed how her agonizing death following her legal abortion took weeks. The infection was so horrific, she developed gangrene, enduring amputations prior to her death.

As we move closer to fully abolishing abortion in the United States, violence against pro-lifers is expected to intensify. But, despite the dangers, every pro-life activist and organization understands that the act of abortion itself is the most heinous form of violence on innocent preborn babies.