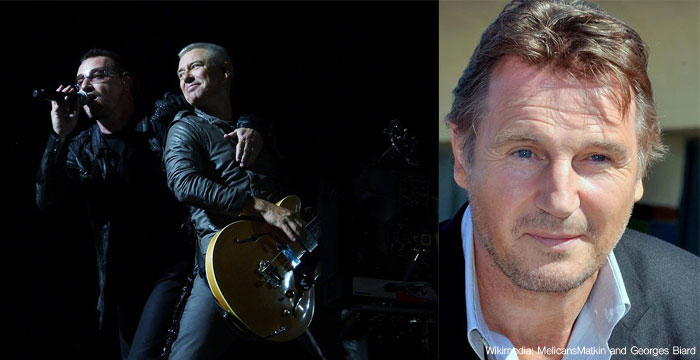 On May 25th, Ireland will vote on a referendum to repeal the Eighth Amendment. Ireland is currently one of the most pro-life countries in the world, and the Eighth Amendment recognizes the equal right to life of the mother and the preborn baby. If Irish citizens vote for repeal, preborn babies would have no protections and abortion could be legalized for any reason up to birth.

The Irish media have demonstrated blatant pro-abortion bias, and now several Irish celebrities are urging Ireland to support abortion. On tour earlier this month, the iconic band U2 announced their support for repealing the Eighth Amendment.

Dave Evans and Adam Clayton told The Times that U2 hopes for an affirmative vote on the referendum, and that they went public with their pro-abortion position after bandmembers reached a unanimous decision. The announcement came as a shock to many Irish citizens and many ardent U2 fans around the world. After the band posted on Twitter urging support for repeal, they received pointed responses from many pro-life fans. Many responses emphasized that U2’s position goes against the band’s long record of humanitarian advocacy. The preborn are some of the most defenseless human beings, and to advocate repealing protections for those lives is inconsistent with the band’s effort to aid the vulnerable:

20+-year fan with a broken heart. All this power, and this is your use of it. Be the voice of the voiceless; protect the unborn. “It is a poverty to decide that a child must die so that you may live as you wish.”—St. Teresa of Calcutta #everyonedeservesabirthday

Every statement you’ve ever made about love and charity has been undone with one wrong stand. Hopefully you’ll grow from this.

I’m not really surprised, but I am disappointed. I know a few family members who’ll be devastated including one son who loves U2 but loves life more. Celebrity endorsement won’t push Irish people to remove all human rights for unborn babies. #Savethe8th #LoveBothVoteNO #8thRef pic.twitter.com/ZhB2bjSNPL

To my favorite band: Abortion, the intentional killing of a human being, is the most dire human rights issue of our time. Please thoughtfully and prayerfully reconsider your position. And please don’t use a heart graphic in support of homicide.

Last week, Irish actor Liam Neeson also voiced support for repeal when he wrote a long, rambling letter published in the Independent attempting to explain his support for abortion. Neeson wrote, “There are times when we must stand for what is right. When the obvious injustice of a situation demands that we do so. For me, the upcoming referendum on the Eighth Amendment is one of those times.”

The “Schindler’s List” star repeatedly emphasized human rights, but when it came to actually defending his pro-abortion position he was decidedly less direct. Neeson oddly went so far as to claim, “There’s nothing wrong in not knowing everything there is to know about abortion.”

The basic facts about abortion are readily available, and to argue that people should ignore the gruesome reality of taking the life of a preborn child is a grave injustice.

Without evidence, Neeson claims that the Eighth Amendment is part of “indignity and abuse” inflicted on Irish women on “a grand scale.” To the contrary, Ireland has shown concern for women’s health issues and seen a decrease in maternal deaths since passage of the Eighth Amendment. Ireland is ranked by the United Nations as “one of the safest places in the world for a mother to have a baby,” which underscores the fact that protecting the right to life of the preborn child does not in any way prevent physicians from treating life-threatening health conditions that arise in a pregnant woman.

Although abortion activists often argue that abortions are necessary to save the life of the mother, former abortionist Dr. Anthony Levatino shows “nothing could be further from the truth.” In this video, Dr. Levatino explains why abortion is never medically necessary:

While many fans are shocked and saddened by celebrities’ vocal support of repealing the pro-life protections of the Eighth Amendment, Neeson and U2 members have made no secret of their pro-abortion views in the past. Neeson has worked with Amnesty International for years to push a radical abortion agenda in Ireland. In 2015, he narrated an ad by Amnesty International calling Ireland’s pro-life laws “a cruel ghost of the last century.” Last year, U2 lead singer Bono claimed in an interview last year that he was “embarrassed” by Ireland’s strong pro-life laws and stated that protecting the right to life of preborn babies “makes you deeply ashamed.”

The recent high-profile endorsements of a pro-abortion regime for one of the world’s most pro-life countries can seem disheartening. Nonetheless, celebrities and politicians will not determine Ireland’s fate. On May 25th, the individual voters will decide if Ireland maintains equal protection of the right to life of every human being.