Now, rather than scold abortion profiteers for gouging their clients, newly published research from the pro-abortion group Advancing New Standards in Reproductive Health (ANSIRH), is pointing to these increases as a call for access to taxpayer dollars to finance abortion. The study, “Trends In Self-Pay Charges And Insurance Acceptance For Abortion In The United States, 2017–20,” was published in an article presented at the Virtual Annual Meeting of the National Abortion Federation (NAF), May 12, 2021, and funded by ANSIRH. There, the group concluded that the taxpayer and private insurance companies needed to cover more of the cost for pregnant women, all while the abortion industry’s “bucket of money” fills up.

If the abortion pill costs the industry under $100, why are clients being gouged?

The ANSIRH funded report found that between 2017 and 2020, the “median patient charges increased for medication abortion (from $495 to $560).” Today, abortion pill sales make up the majority (54%) of all abortions sold in America while the cost of the abortion pill regimen — mifepristone and misoprostol — is well under $100 today. In fact, a June 2021 report by the Kaiser Family Foundation (KFF) states that while abortion pill manufacturer “Danco Laboratories does not make the cost of Mifeprex public, providers report that Mifeprex costs them around $90 a pill.” But the cost could be even lower, according to the abortion pill pharmacy Honeybee Health, which currently states online that “the cost for both medications is $75.” 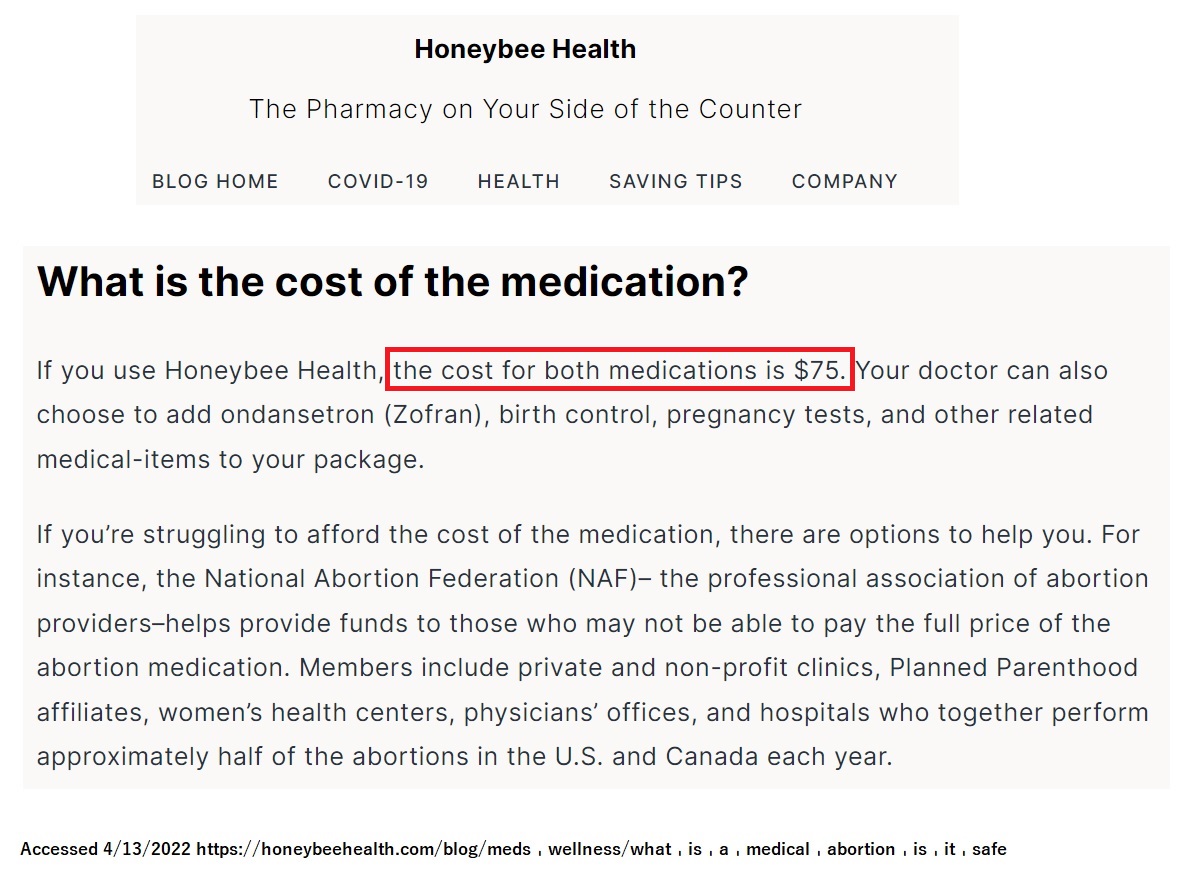 In 2017, abortion providers offered important lab tests and blood work to rule out dangerous ectopic pregnancies and determine a woman’s Rh factor. But by 2020, the industry had rolled out a “no test” abortion pill protocol, eliminating those important tests (and costs) and relying completely on a woman’s or minor’s best guess as to the date of her last menstrual period and risk of ectopic pregnancy.

Then, during a variety of lawsuits in 2020 — and eventually a 2021 rule change by the pro-abortion Biden Food and Drug Administration (FDA) — the industry completely eliminated the in-person medical visit requirement and permanently enabled the abortion pill regimen to be shipped by mail, further increasing the savings to abortion profiteers. The industry instituted these changes and quickly moved much of their business to unregulated online spaces, reducing their costs even further.

This means that today, essentially all an abortion opportunist needs to open an online abortion business is a phone, a computer and a partnership with an online pharmacy, enabling abortion facilities to increase profits by eliminating facilities and staff and drastically reducing the time spent with clients.

To further demonstrate how cheap it is to operate an online abortion pill dispensary, look no further than recent media interviews with these unregulated online businesses where industry insiders openly boast that the cost of chemical abortion is low, resulting in large profits — a fact ANSIRH’s report failed to note.

Dr. Jamie Phifer, founder and medical director of the online abortion business Abortion On Demand (AOD) acknowledged  “per patient cost is relatively low” at her business — so low, in fact, that rather than cut the cost to abortion clients, AOD donates “60 percent of our profits to Keep Our Clinics of the Abortion Care Network.”

But even brick and mortar facilities like Whole Woman’s Health are marking up the cost of the abortion pill regimen (which can be purchased for under $100) by charging clients four to five times more.

The motive behind ANSIRH’s claim about abortion costs increasing has little to do with a concern for the abortion consumer and is more likely centered on the fact that they want to force the American taxpayer to foot the bill for abortion, which will, as Live Action News has previously documented, result in driving up the number of abortions and put greater profits into the coffers of the abortion industry.