It has to be with love.

In one of my recent articles, I recounted an experience I had outside an abortion clinic where a man was yelling at everyone: the clinic workers, people going in and out, and the groups praying outside. He yelled at the praying groups for “praying to a dead lady” and yelled at the abortionist about his “hypocritic oath.”

This is not a rare occurrence in the pro-life movement. I pointed out how ineffective this tactic is, and I found the responses quite interesting. I knew that many people agreed with the yelling man. But the majority of people who commented about the article in support of the yelling (and aggressive behavior) were missing a major point. Before I go into that, here are some of the objections commenters had.

You should be extremely careful about how you go bringing people to Jesus. Most people do not have a sudden Jesus revelation by having a person yell at them about Jesus. Instead, this is what many people will see you as. 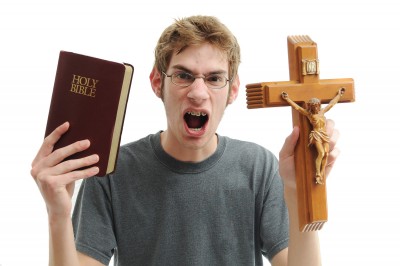 That’s really not the image we as pro-lifers and Christians should be trying to give ourselves. It’s my goal to show people the truth as well, but most people are not receptive to a Jesus-shock. Take baby steps. Start with the truth about life, and one truth leads to another.

While religious beliefs do affect the way religious people act, you can save lives and spread the pro-life message without religion. I love that we have all kinds of pro-life groups! If a person going in for an abortion (or a clinic worker) is not a religious person, chances are religion is not the way to introduce yourself. Find some some common ground and build on that. If you find that you have a shared faith then appeals to your common religious values could be effective but you have to understand who you are talking to first.

Imagine that you are a 16-year-old girl. Your dad has abused your mom and siblings since you were little. Your mom has trouble keeping a job and has been struggling with drugs and alcohol. You’ve not been doing well in school and have been constantly acting out. You don’t have a role model or person to go to for help. You turn to boyfriend after boyfriend to try to fulfill yourself and feel loved, but it hasn’t worked. Then you find out you’re pregnant. What are you going to do? Your boyfriend gives you an ultimatum: have an abortion, or he will leave you. Now tell me: do you seriously think a girl like this is going to be thinking about how sinful an abortion is? No. While it may cross her mind, that is the least of her worries. She worries about her boyfriend leaving her, when her dad will abuse her next, and if her mom will remember to buy food soon. This is the story of too many moms who have abortions.

You cannot make a generalization about these women without asking every woman who has had an abortion what she was thinking about. Our society tells us that abortion is not murder, and that it is a woman’s right to have one. Chances are, many women believe this. When no one offers a different way out, the woman in crisis turns to abortion. It’s our job to show women that there are other ways out of terrible situations. Then we must be the ones to offer that help – not to accuse these women of murder.

Well, honestly, I wouldn’t sit down for tea with anyone because I think tea is gross. I would want someone to try to save me if I were about to be murdered, too.

But the point you have to realize with all these arguments is that you can’t just throw yourself between the baby and abortionist. It’s illegal in most places, and impractical. Why? Because no matter what you do to defend the baby, you must reach the mother first to prevent an abortion from happening.

To stop the bloodshed in our midst, we must stop abortion-minded women from going to have abortions. We must help them solve the problems that led them to the abortion clinic. You must approach the woman with love, or she’ll be turned away. You must offer her a way out of her situation other than abortion, or she will not want your help. All this must be done with love, or the woman is going to run away from you – and straight into the arms of the abortion industry.