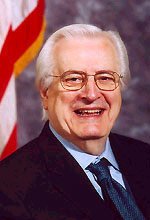 What does the Hyde Amendment do? It ensures that federal funds through Medicaid are not used to pay for abortion, with exceptions.

The Hyde Amendment is not about hurting poor women, as you would think it was, based on claims from groups like Fund Abortion Now.

And NARAL Pro-Choice America further distorted the issue by posting the following graphic on their Facebook on the anniversary: 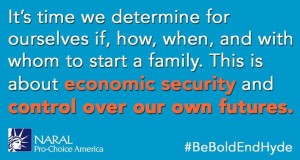 Isn’t that always the talking point about abortion? “[C]ontrol over our futures.” Never mind getting to the real heart of the Hyde Amendment. The Hyde Amendment cannot prevent abortion, not completely. What it can do though is protect the consciences of Americans who do not wish federal dollars to go towards paying for someone else’s abortion.

To such groups, the consciences of Americans don’t matter. This is not even just with regards to pro-lifers, but those who simply do not wish to pay for the abortion of someone else. Polls show that a majority of Americans agree that the government should not pay for abortions.

Some women never manage to get the money they need to pay for their abortion – which means that they are forced to carry the pregnancy to term.

Being born is hardly the worst thing to happen to a child. It is also not the worst thing to happen to the mother, even if the pregnancy is unplanned. A mother may choose adoption or find help with her pregnancy and if she chooses to parent from a variety of sources. She does not need to turn to an abortion which not only has financial costs, but ends the life of her child and may be regretted.

Impoverished women who are pregnant do not need a repeal of the Hyde Amendment, and they do not need to “sell their belongings, go hungry for weeks as they save up their grocery money, or risk eviction by using their rent money to pay for an abortion.” What they need is real support and love, something an abortion can never provide.

Roe v. Wade and Doe v. Bolton may have claimed the lives of over 56 million unborn children, but there is at least one million less added to that toll, thanks to the Hyde Amendment