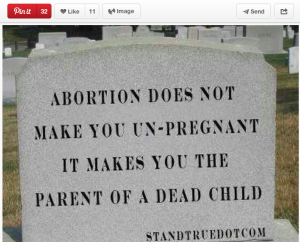 An essential component to any effective con is projecting confidence in what you’re selling. Confidence is contagious, making things seem credible and in doing so playing to the hearer’s desire to not seem stupid, which can often drive people to go along with all sorts of things they would never think of in a vacuum. Another is indignation – if you seem genuinely angry, it intuitively follows that whatever’s motivating that anger must be sincere.

This one-two punch serves pro-aborts well in their offspring disposal advocacy, giving dozens of nonsensical talking points an intimidating air of unearned gravity, such as the staggeringly thoughtless “consent to sex is not consent to pregnancy.”

A sibling of bodily autonomy absolutism, the consent argument is basically that it doesn’t matter whether you willingly perform an action with full knowledge that you are risking the creation of a new human being who will need nine months within your body to develop, because unless you expressly desire that outcome, and intend it while having sex, you hold no responsibility whatsoever for the welfare of the life you created.

It’s clearly nonsense to say someone owes absolutely nothing to someone he or she created, whose very existence is a direct result of that someone’s willful, knowing actions. But this exercise in pure narcissism continues to plague abortion arguments nonetheless, with pro-aborts boldly asserting it as if it’s the most obvious thing in the world, ready to throw a tantrum if their “logic” isn’t dutifully accepted.

It also helps that there’s a semi-clever little bait-and-switch embedded in the talking point: pairing consent to sex with consent to pregnancy. It’s true enough that that having sex doesn’t automatically mean you want whatever children result, and that desire is often used interchangeably with the idea of consent.

If I blow through every red light I see, I’m not desiring a twelve-car pileup. It’s not what I intend to happen at all; I’m just trying to get to work on time. But that doesn’t mean my actions didn’t cause wreckage and bloodshed. It’s still my fault. I’m still responsible. Foot-stomping about how “I never consented to these accidents” won’t do me a lick of good with the police, the courts, or pretty much anyone else.

Yet in the pro-abortion mind, that exact logic is considered perfectly adequate to divest people of any and all responsibility for whatever human life they may bring into existence. It would be funny if the fallout weren’t so lethal.