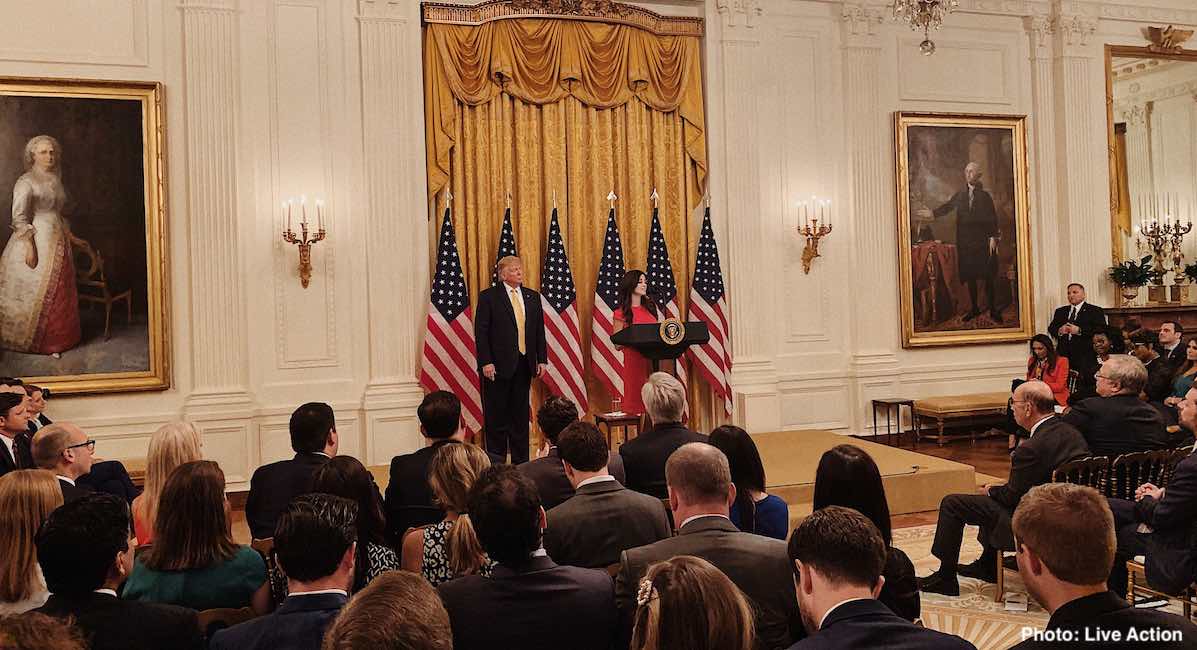 A recent report in The Washington Post shows significant media bias in its reporting on Big Tech censorship of conservative and pro-life groups. The article comes following a summit at the White House yesterday, where Live Action President Lila Rose spoke about the major suppression and censorship Live Action has experienced at the hands of Twitter, Facebook/Instagram, YouTube, and even Pinterest. National Washington Post correspondent Philip Bump even went so far as to title his article, “Trump’s inviting some buds over to complain about how Twitter is mean to them.”

Bump has failed to do journalistic due diligence in investigating allegations of censorship. His intentions appear to be political — to go after President Trump, making him the focus, instead of the blatant censorship of Big Tech companies against conservative and pro-life groups. In his WashPo analysis, Bump wrote in part, “On Thursday, the president will host a summit focused on social media at the White House. Formally, it’s an event focused on having ‘a robust conversation on the opportunities and challenges of today’s online environment,’ a White House spokesman told the New York Times. Informally, it’s a response to ongoing conservative complaints that they are being unfairly and systematically targeted by social media companies for their political beliefs.” 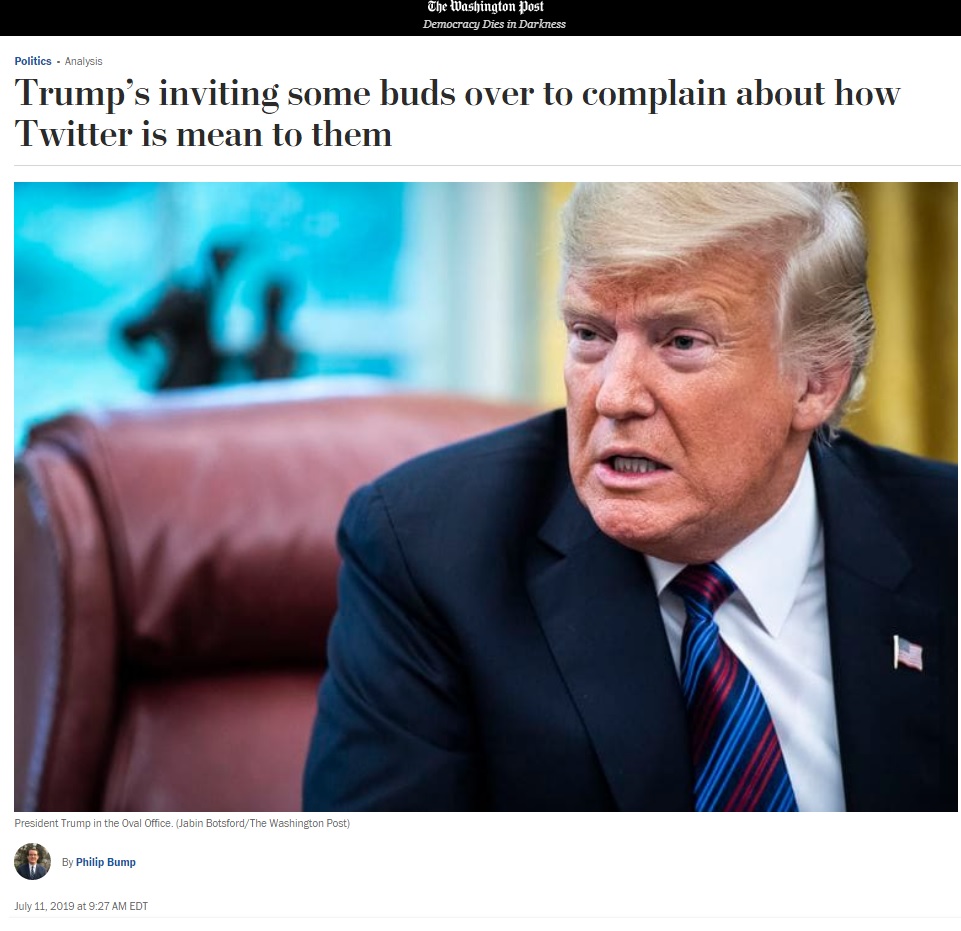 So far this sounds fair, however in his next sentence, Philip Bump writes:

We’ll interject here to note that there’s no compelling evidence that this is the case. There has been a push by social media companies in recent years to crack down on abusive or hateful rhetoric. It might not be entirely surprising then that supporters of a president who disparages “political correctness” and embraces rhetoric hostile to his opponents should find themselves occasionally a target of efforts to tamp down on abuse…. So Trump invited a number of sympathetic and controversial allies to the White House to discuss all of this. He didn’t invite the companies themselves….

There was no mention by Bump about the clear censorship of pro-life groups like Live Action — not one. No request for an interview, no inquiries from the Washington Post to Live Action whatsoever.

This did not go unnoticed by Live Action president Lila Rose, who took to Twitter to correct Bump’s assertions. “Lies from @WaPo.  @pbump says there’s ‘no compelling evidence’ of Big Tech political bias. Did you listen to my speech? I shared documented cases of @LiveAction & I deplatformed & suppressed for pro-life content, while pro-abortion orgs are welcomed.” 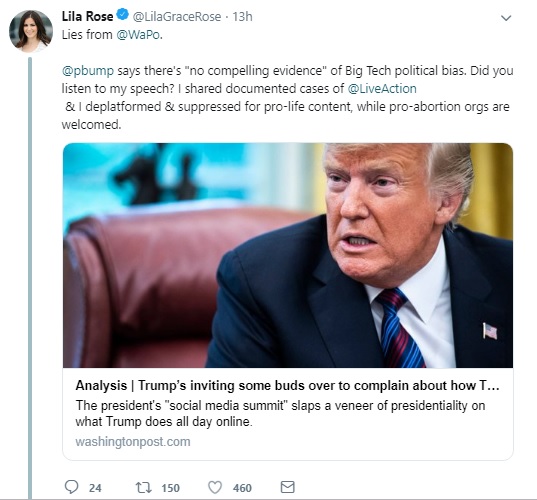 Here’s Rose speaking at the summit, mentioning just a few instances of Big Tech bias against the pro-life organization:

We have been banned or suppressed on virtually every social media platform.

The active censorship is egregious and we refuse to back down to Big Tech. 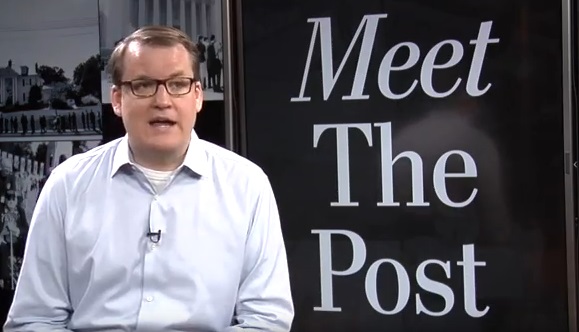 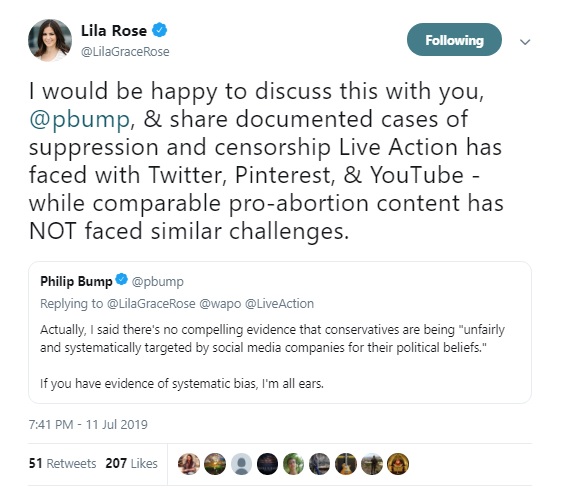 At first, Bump’s response to Rose was defensive, but having been called out, he eventually responded, “If you have evidence of systematic bias, I’m all ears.”

A little effort on The Washington Post’s part would certainly be helpful, given that the evidence has been published multiple times already. But Rose even pointed out that The Washington Post itself has previously covered Live Action’s censorship, writing, “In fact, remarkably, @washingtonpost even reported on one of our cases two years ago. @pbump would do well to do some research before publishing the usual far-left talking points.” 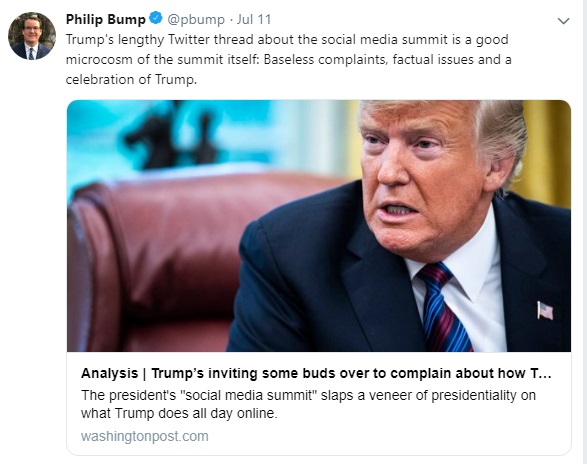 Rose added, “Of course, the article was slanted to favor @Twitter & pro-abortion ideology. But it referenced Twitter’s demands: they confirmed in writing that to reinstate our ads, we must stop calling for defund of @PPFA & showing ultrasound images. Twitter continues to allow PP to run ads.” The discussion continued, with Bump — who failed to even mention WashPo’s past reports — now defending the bias of the report. Keep in mind he has not personally seen any of Live Action’s evidence:

The media’s pro-abortion bias is prevalent and has been exposed by Live Action News multiple times (read here, here, here, and here). WashPo and many of its journalists (so far, excluding Bump) are among a list of media who have been”honored” with Planned Parenthood’s infamous “Maggie Award”, named after Planned Parenthood’s eugenicist founder, who promoted the idea of forced sterilization for those she deemed “unfit” to be parents. Live Action News recently documented how the award has been renamed.

Bump himself has previously been called out by The Federalists’ Mollie Hemingway for his false conclusion that human life in the womb begins at implantation rather than fertilization. In that WashPo piece, Bump wrote, “Consensus exists (if not unanimously), and the consensus is that uterine implantation is the moment at which pregnancy begins.” Did Bump attempt to investigate opposing viewpoints from scientific based organizations like Charlotte Lozier Institute (CLI) or the American Association of Pro-life Obstetricians and Gynecologists (AAPLOG)?

Here’s the thing: this is a perfect example of moving the goal posts. Life begins days BEFORE implantation, and moves over a period of days down the Fallopian tube into the uterus. Simply claiming that the state of being “pregnant” begins at implantation does nothing to change the fact a new human life began at fertilization, days before that human life implants himself or herself into the uterine wall.

Bump got his information, by the way, directly from one extremely pro-abortion group, the American College of Obstetrics and Gynecologists (ACOG), which collaborates with abortionists — as Live Action News details here. 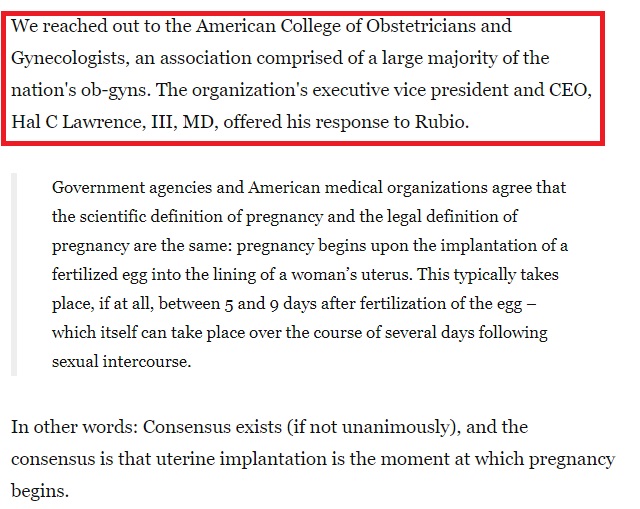 For now, we won’t hold our breath.