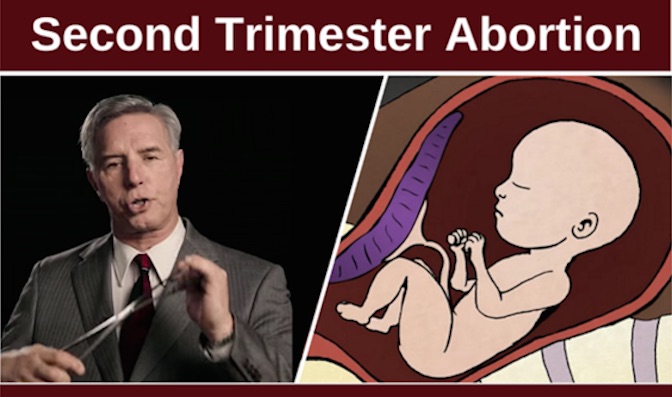 April Glaser, a pro-abortion technology writer for Slate, was so upset that her YouTube search for the word “abortion” led her to videos about abortion that she emailed YouTube to pressure them to change the search results. Shockingly, she claims YouTube took near immediate action, changing the algorithms so that medically accurate videos would no longer appear within the top search results.

Search for “abortion” on YouTube last week and the top results were a horrifying mix of gore and dangerous misinformation. YouTube changed the results after I asked https://t.co/sNjQncSrNS

Live Action’s Abortion Procedures videos were among the top search results that disturbed Glaser. She noted in her piece (emphasis added) that the presentation of what abortion actually looks like just wasn’t “dispassionate” enough for her:

… One top result was a clip called “LIVE Abortion Video on Display,” which over the course of a gory two minutes shows images of a formed fetus’ tiny feet resting in a pool of blood. Several of the top results featured a doctor named Antony [sic] Levatino, including one in which he testified to the House Judiciary Committee that Planned Parenthood was aborting fetuses “the length of your hand plus several inches” in addition to several misleading animations that showed a fetus that looks like a sentient child in the uterus. The eighth result was a video from conservative pundit Ben Shapiro, just above a video of a woman self-narrating a blog titled, “Abortion: My Experience,” with text in the thumbnail that reads, “My Biggest Mistake.” Only two of the top 15 results struck me as not particularly political, and none of the top results focused on providing dispassionate, up-to-date medical information.

The videos were created to educate viewers on how the different abortion procedures are actually committed, since the abortion industry fails to inform women of the truth. The Live Action videos in question are from the “Abortion Procedures” series, which show medical animations of the most common abortion procedures. The animations depict how a preborn child appears during each stage, and are narrated by former abortionist Dr. Anthony Levatino, who committed thousands of abortions before becoming pro-life. Dr. Levatino has the experience to understand and explain how each type of abortion works. All of the videos can be viewed here, including this one on how the abortion pill works:

So you pressured @YouTube to hide our educational, scientifically accurate videos – but claim to be “pro-choice?”

Alison Centofante, Director of Strategic Communications for Live Action, took to Twitter to respond to Glaser and YouTube, pointing out how troublesome this entire situation is.

“It’s more than problematic that a writer can email YouTube about search results showing medically accurate abortion videos and YouTube will CHANGE THE SEARCH RESULTS,” she wrote. “How professional. How fair.”

It’s more than problematic that a writer can email YouTube about search results showing medically accurate abortion videos and YouTube will CHANGE THE SEARCH RESULTS. How professional. How fair. @YouTube

Other uses responded as well:

Something’s wrong if it’s “horrifying” and your reaction is to get it out of your (and everyone’s) sight to preserve your perspective.

Abortions are horrifying and gore is the perfect way to describe the act.

DICTIONARY
gore
noun
blood that has been shed, especially as a result of violence.

Not sure what’s more concerning: that you want to search “abortion” and have displayed results of puppy dogs, sunsets, and unicorns, or that YouTube (owned by Google) agreed with you.

This user in particular responded with a interesting and sarcastic comparison:

Search for “slavery” on YouTube today and the top result is a horrifying documentary. YouTube should change the results to show Samuel L. Jackson from Django.

Glaser claims that these honest and to-the-point videos were created to enrage people — but people should be enraged about abortion. However, Glaser is enraged for the wrong reason. She ignores the fact that innocent humans are being violently killed and instead focuses her anger on the fact that Live Action is working to educate people on the truth about abortion. It isn’t the injustice of abortion that upsets her, it’s the possibility that hearts and minds might be changed to pro-life.

These videos show exactly what abortion is and what abortionists do. They absolutely should appear at the top of YouTube’s search results for the word “abortion.” YouTube made the wrong move in trying to silence pro-life voices and aid the abortion industry in hiding the truth from women. Women considering abortion deserve to be fully informed before they make a decision about abortion. Women seeking abortion deserve full disclosure on what abortion is so they can make a truly informed choice, and post-abortive women deserve the truth so they can heal. Likewise, men deserve to understand what is involved in abortion so they are better equipped to understand why they shouldn’t see it as an easy solution to the problem of an unplanned pregnancy.