Just watch how Stuart Schear, Vice President for Communications for Planned Parenthood Federation of America, is more concerned about falsely discrediting Live Action than about the safety of the girls his organization claims to protect.

In part one of this article series, Live Action News documented how a Planned Parenthood insider revealed the retraining the organization told the media they were conducting was nothing short of a hoax. Part two will expose how Planned Parenthood’s 2011 claim that it had been in contact with the local authorities after suspected sex traffickers visited several facilities was also a hoax. The media was used to further this deception, too,

When Live Action released footage from a New Jersey Planned Parenthood center (where the manager warned the Live Action investigator, posing as a pimp, to have their trafficked underage girls lie about their age to avoid mandatory reporting laws), The New York Times reported that the center had notified authorities:

In a statement responding to the video, the Planned Parenthood Federation of America said that immediately after the “highly unusual” visit to a clinic in Perth Amboy, N.J., by a man posing as a sex trafficker and a woman posing as a prostitute, it had notified legal authorities.

“On that same day, prior to learning that these visits had also occurred in other states, the local Planned Parenthood affiliate notified local law enforcement in New Jersey..”

To verify the truth of these claims (something the media should have followed up with but did not), Live Action made a series of Freedom of Information Act (FOIA) records requests of law enforcement and child protective services in the states and cities where the alleged trafficking occurred. The responses show that out of five states and Washington, D.C., only one state — Arizona —  had responsive records showing Planned Parenthood reported anything to authorities. A copy of one of the many responses Live Action received is below: 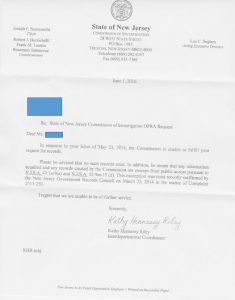 The situation in Virginia also shows how Planned Parenthood deceived the media with their false claims.

In a similar case involving clinics in Virginia…Planned Parenthood said it had reported the suspicious visits to clinics in New Jersey, Virginia and other states last month to local and federal law enforcement.

But, official Virginia FOIA responses seem to contradict Planned Parenthood’s claim that they reported the incident locally. Below, you can see one of those responses from the Commonwealth of Virginia Social Services, where they state “VDSS has no records in response to your request.” Others can be viewed here: 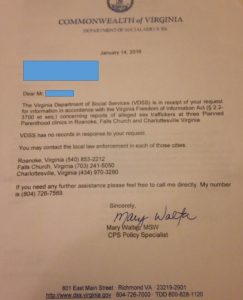 Then, in an interview with Democracy Now, uploaded February 16, 2011, Richards, who earns close to one million dollars a year from her organization, said again that she had reported the “sex traffickers” to both local and federal authorities:

As soon as we saw that there were folks posing as these people as pimps as prostitutes, claiming that they were underage sex trafficking rings, we reported not only to the local authorities but we went to the US Attorney General…

While it may be true that Planned Parenthood president Cecile Richards sent a letter to U.S. Attorney General Eric Holder, the letter failed to correctly identify all the states where possible sex trafficking could have been occurring. Additionally, the letter claimed that Planned Parenthood staffers made it clear to the “sex trafficker” that they would comply with state laws and report suspected conduct that endangered minors. (A point which appears to be contradicted by the undercover video conversations with staffers.)

Erica Sackin, media relations coordinator for Planned Parenthood of New York provided a written statement to NCRegister.com, which said, “All teens who disclose abuse meet with a licensed social worker, who records and reports the abuse.”

Heather Estes, CEO of Planned Parenthood’s Shasta-Pacific region, told the Napa Valley Register that although there are “occasions when our staff don’t do what they should do,” Planned Parenthood’s practice is to report all cases of child prostitution and other child abuse to the authorities.

Joan Malin, president of Planned Parenthood of New York City, admitted to the New York Times that they are “required to report anything we believe is child abuse or neglect by a parent or guardian, which we do.”

However, Planned Parenthood of New York somewhat contradicted that acknowledgment in a published statement that explained PPNY only reports abuse that is “disclosed” by the teen:

“All teens coming into Planned Parenthood of New York City are screened for child abuse and neglect. All teens who disclose abuse meet with a licensed social worker, who records and reports the abuse.”

Planned Parenthood’s misleading statement was then repeated by CNN.

There are additional examples showing how the largest chain of abortion providers deceives the media. In the tape below, you hear a Planned Parenthood representative claim they could not report child sexual abuse in another Live Action sting, because the “girl” had not provided her name, when in fact, Live Action’s footage included in the video below clearly shows she did.

As Live Action News and others have documented repeatedly (information those within the media establishment never seem to mention), Planned Parenthood has been failing to report child sexual abuse for decades. Their damaging response to victims of sex trafficking has been documented here and elsewhere.

Planned Parenthood is a recipient of half a billion in federal tax dollars each year. If for no other reason than this — and there are plenty of reasons to protect young girls — the media owes it to the public to call this abortion corporation to the highest standard. In addition, under Title X — the family planning program that also funnels millions to Planned Parenthood — recipients of these dollars are expected to comply with state and federal laws regarding the reporting of child sexual abuse.

Instead of applying the journalistic practice of ‘trust but verify,’ too often members of the media are more interested in receiving one of Planned Parenthood’s awards than in doing the hard work of investigating the facts. It is high time the mainstream media stopped believing Planned Parenthood’s lies.