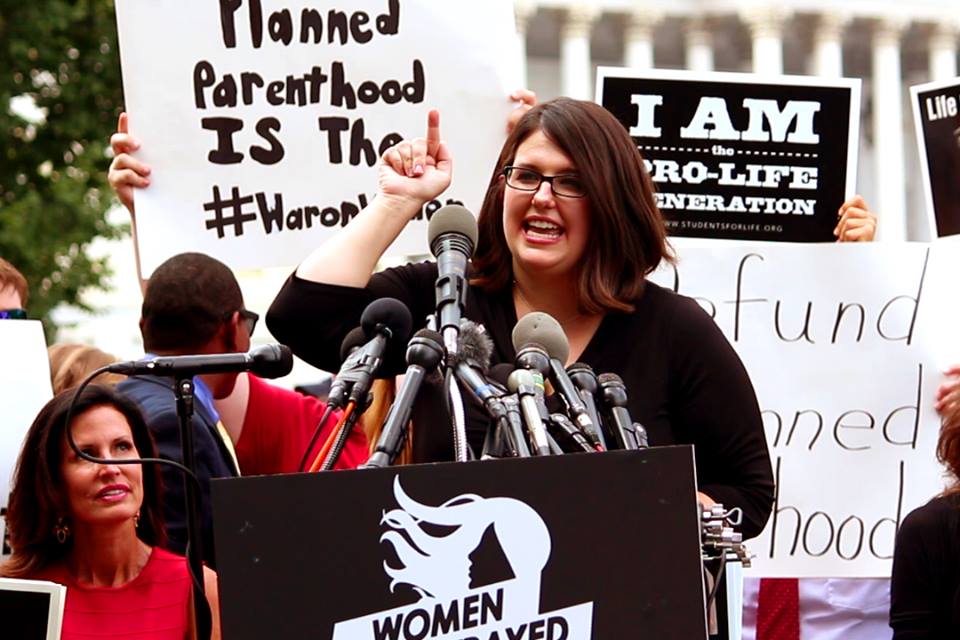 On July 28th, over 12,000 people gathered in 65 U.S cities to hold rallies calling for the defunding of Planned Parenthood. Students for Life of America President, Kristan Hawkins had the brilliant idea to invite pro-lifers to hold ‘Women Betrayed rallies’.  As she told the National Catholic Register:

Even in Connecticut, a state with pro-choice government leaders, people willingly gathered to speak out against Planned Parenthood’s horrendous practice of selling baby parts for profit. I was honored to be a part of this important event. In D.C., Kristan Hawkins was joined by Presidential candidates Ben Carson and Ted Cruz who gave heartfelt speeches on behalf of protecting preborn lives. The day after the rallies, #WomenBetrayed was the #1 trending topic on Facebook. The rallies received news coverage from Fox, NBC, the Washington Times, and a number of other publications.  At the Houston rally, two parents who were originally headed to Planned Parenthood talked to a sidewalk counselor and instead chose life for their baby.

The next step for Women Betrayed is Speak Out Day on Tuesday, August 18th. For this event, participants are encouraged to bring letters to the offices of their elected officials.

After Senate Bill 1881 to cut federal funding to Planned Parenthood failed, the states of Alabama, Louisiana, and New Hampshire voted to halt state funding to the nations largest abortion provider.  This is why it’s vitally important to continue to contact elected officials across the country. This event will focus on senators and representatives to either ask them to vote for defunding Planned Parenthood, or thank them for already supporting defunding. The event will be a combination of a rally and a lobbying day. So far, 23 cities have signed up to to hold a Speak Out Day in their state. Individuals who sign up to lead the event will receive a Women Betrayed action kit which includes:

Check out www.womenbetrayed.com for details on how to hold an event in your city or attend one.