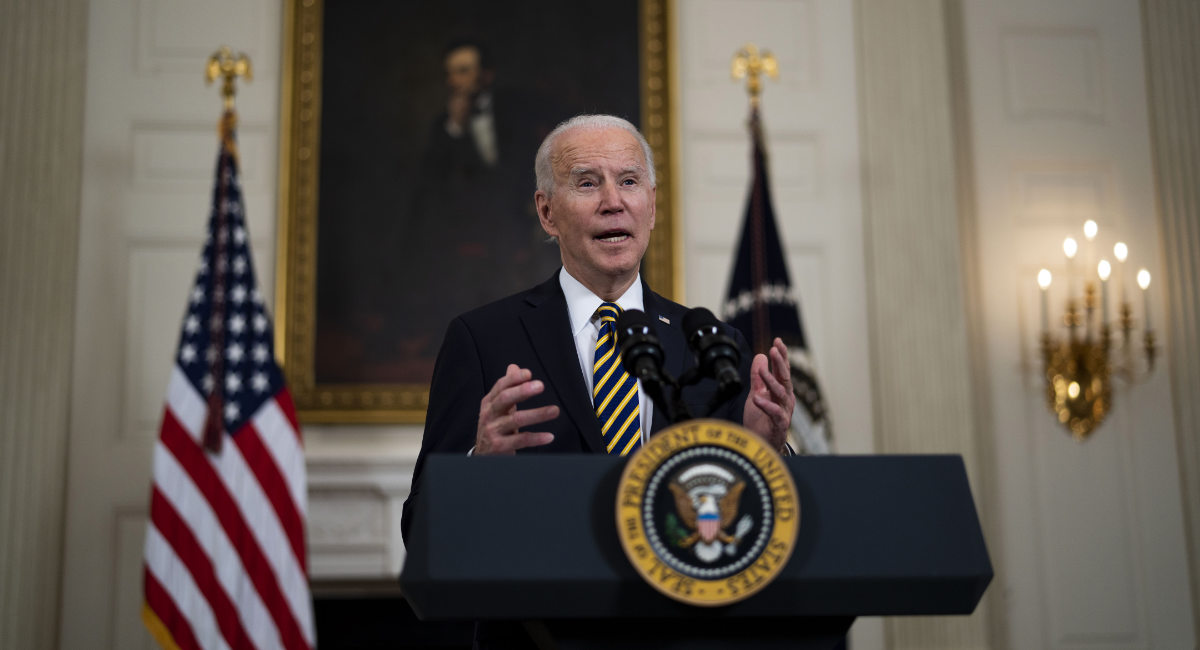 Ginna Lance has been appointed the Deputy Chief of Staff for the Office of the U.S. Trade Representative (USTR). According to the USTR website, Lance previously worked in the Office of then-VP Joe Biden, where she served as the Director of Scheduling and Administrative Manager to the Chief Experience Officer at Planned Parenthood Federation of America.

The Biden administration recently tapped Jesse Lawder to be Deputy Assistant Secretary of Labor for Public Affairs. According to his LinkedIn page, Lawder was the former VP of Marketing and Communications for Planned Parenthood of the St. Louis Region and Southwest Missouri. That affiliate operates the only abortion facility in Missouri — Reproductive Health Services Planned Parenthood — which has had multiple reports of abortion-related emergencies over the years and is suspected to only be referring for abortions at this time.

According to the St. Louis Post Dispatch, “Lawder noted in a news release that while at Planned Parenthood he had “worked to protect the last abortion clinic in Missouri, roll out new telehealth services during the pandemic and led a successful unveiling of (a) … new Fairview Heights health center.” (That health center, located in Illinois, is the facility where the St. Louis Planned Parenthood is now referring abortion clients.) In announcing his move to the Biden Department of Labor, Lawder was immediately congratulated by members of the media on Twitter, including Kate Smith from CBS News, Kathryn Diss from ABC News, and Sarah Lynch of Reuters. 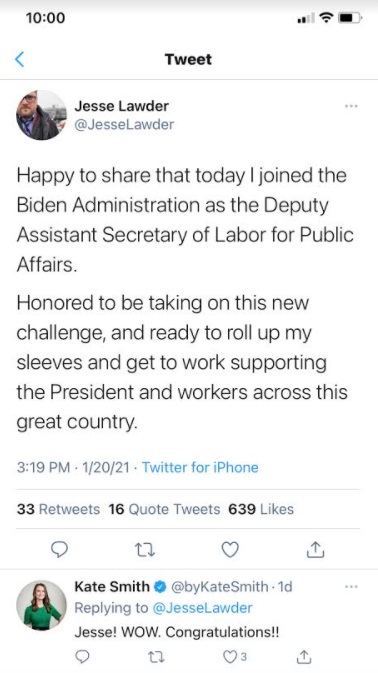 Mini Timmaraju has been appointed to a staff position at the U.S. Office of Personnel Management (OPM). According to the OPM website, her “prior roles include National Women’s Vote Director for Hillary for America, Chief of Staff for Congressman Ami Bera, and leadership positions with Planned Parenthood and the National Council of Asian Pacific Americans.” 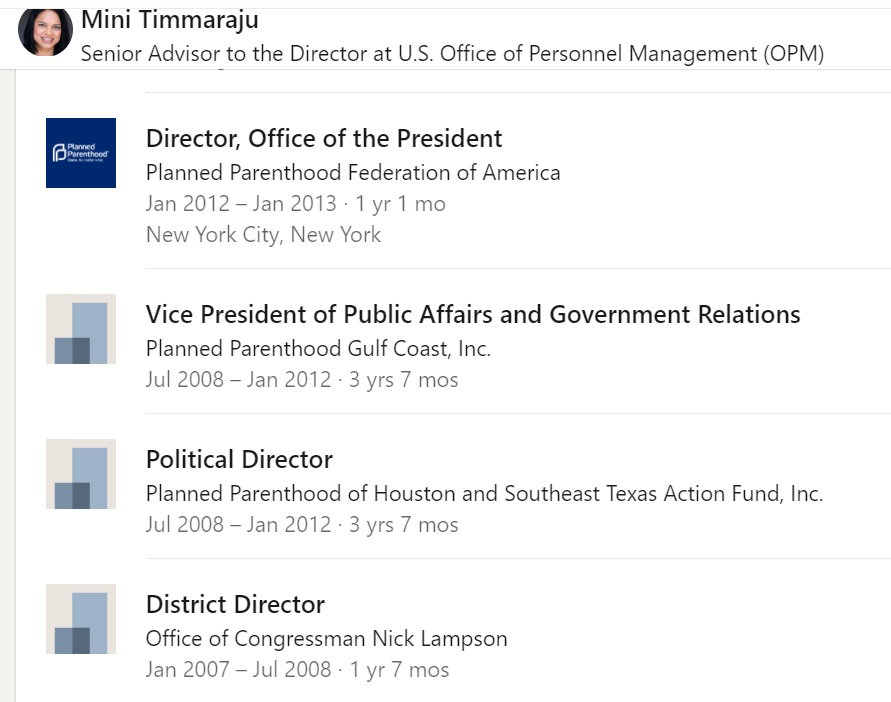 Xavier Becerra, nominee for Secretary of the Department of Health and Human Services

Biden has nominated California Attorney General Xavier Becerra to serve as secretary for the Department of Health and Human Services (HHS) despite his complete lack of experience in health care. Becerra is hostile towards pro-life activists, even targeting Center for Medical Progress (CMP) investigators who exposed Planned Parenthood’s participation in the trafficking of aborted baby body parts. The HHS nominee also attempted (and failed) to force pro-life pregnancy resource centers (PRCs) — which offer life-affirming help to pregnant women — to promote abortion.  Planned Parenthood praised the Biden pick, writing, “As California attorney general, Becerra fought against the Trump administration to protect the ACA and the Title X program, challenged the administration’s racist public charge rule, and defended a state law that required so-called ‘crisis pregnancy centers’ to provide accurate information to their patients.” 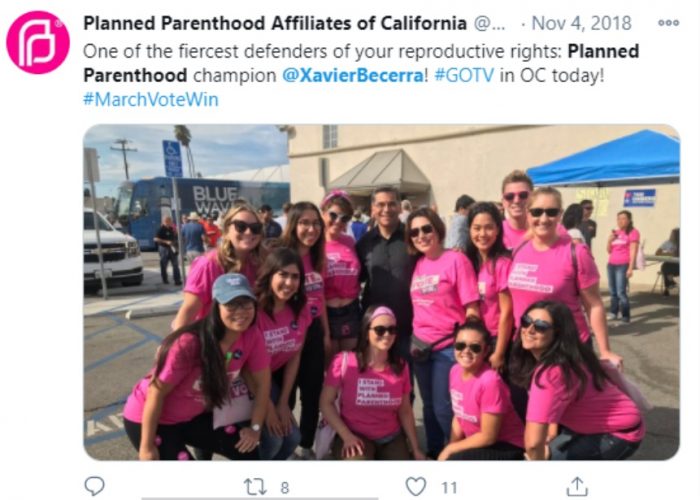 Jen O’Malley Dillon who once referred to Republicans as “a bunch of f—ers,” has been named Biden’s White House deputy chief of staff. On her birthday, she publicly declared that she would be donating to Planned Parenthood, NARAL, and the pro-abortion group EMILY’s List. 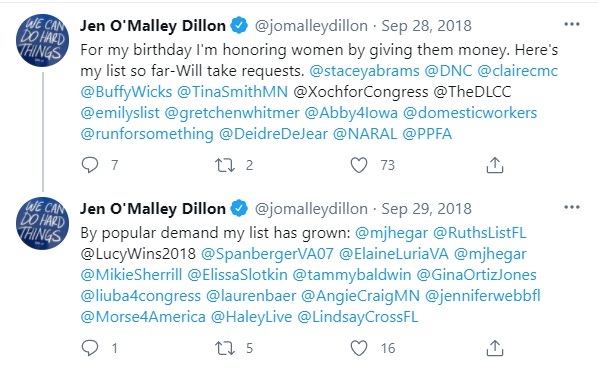 Vivek Murthy, the 19th U.S. Surgeon General, has been nominated as Biden’s pick for the 21st U.S. Surgeon General. According to Planned Parenthood, “He has proudly declared that access to abortion and birth control are essential components of health care.” The image below shows Murthy attending a national Planned Parenthood conference with former PP president Leana Wen. 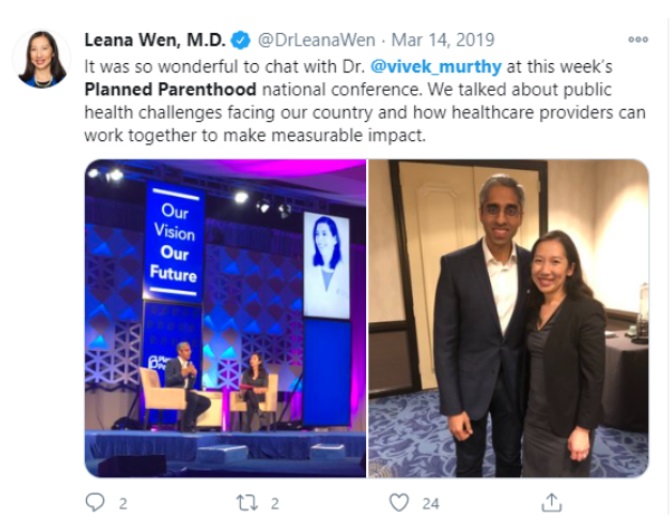 Josh Orton has joined the Biden Department of Labor as a Senior Policy Advisor to the Secretary. Orton was previously a senior advisor to Sen. Bernie Sanders (I-VT) and a former Senior Legal Advisor to NARAL Pro-Choice America.

Indiana University law professor Dawn Johnsen was recently sworn in as a senior counselor in the Department of Justice’s Office of Legal Counsel. According to an online bio, Johnson was once the legal director for the National Abortion and Reproductive Rights Action League (now known as NARAL Pro-Choice America) as well as a staff counsel fellow at the American Civil Liberties Union Reproductive Freedom Project. In addition, Johnson has served on the board of Planned Parenthood’s former “special affiliate” and research arm, the Guttmacher Institute. A 2009 TownHall op-ed quotes Johnson as claiming that abortion restrictions “reduce pregnant women to no more than fetal containers.” She also allegedly claimed, “There is no ‘father’ and no ‘child’ – just a fetus.”

Just days after Ilyse Hogue, then-president of NARAL Pro-Choice America, tweeted her recommendation for White House Chief of Staff, Joe Biden named Ronald Klain for the position. Live Action News previously documented Klain’s bizarre allegiance to NARAL and abortion. In a March of 2019 tweet from NARAL’s president thanking Klain for “being a vocal leader on these issues” of abortion rights, Klain shockingly referred to himself as “[j]ust a soldier in your army @Ilyseh.” In a tweet a year prior to this, Klain referred to Hogue as a “great leader.” 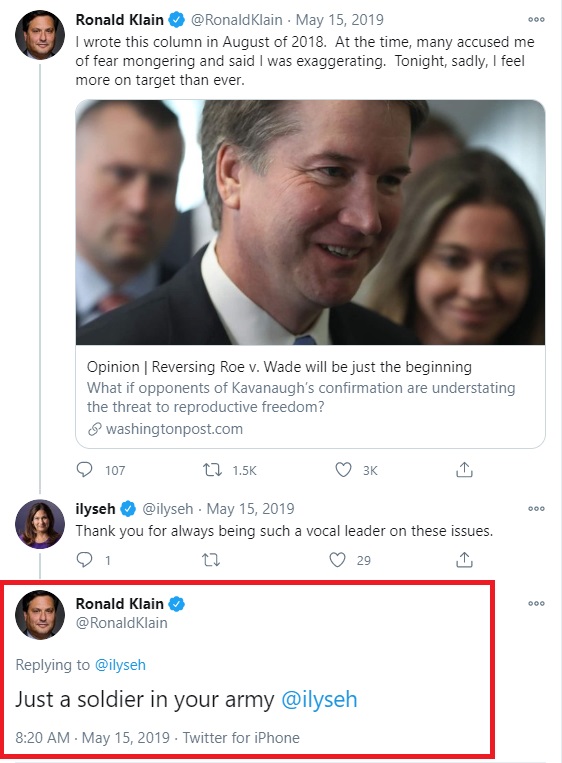 Biden’s former Senior Campaign Advisor, Symone Sanders, has a cozy relationship with the abortion industry. In 2018, she joined a NARAL Rise up for Roe tour where she called abortion health care. She has since been named Senior Advisor and Chief Spokesperson for Vice President Kamala Harris. 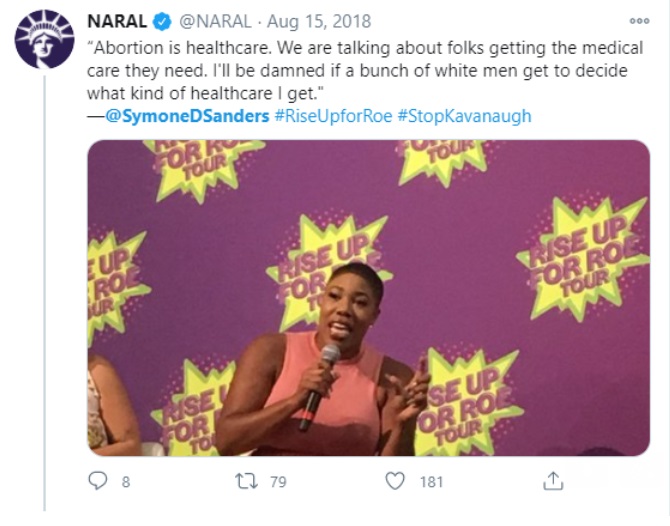 Neera Tanden, nominee director of the Office of Management and Budget
President Joe Biden has nominated Neera Tanden, former president of the Center for American Progress, as director of the Office of Management and Budget (OMB). In 2018, Tanden tweeted, “Proud to stand with my sisters at @NARAL.” She has also expressed that she is “proud to stand with Planned Parenthood….”  In 2017, she tweeted that she had “led multiple protests with MoveOn, SEIU, [and] Planned Parenthood….” According to the National Catholic Register, during Tanden’s confirmation, she “reaffirmed President Biden’s opposition to the Hyde Amendment… When asked by Sen. Josh Hawley, R-Mo., if she would push to preserve the Hyde Amendment in future presidential budget requests, Tanden would not say.”

Samantha Power has been nominated to head the U.S. Agency for International Development (USAID). According to the National Catholic Register, “Samantha Power… has celebrated the expansion of abortion access both domestically and in places like her native Ireland. As head of USAID, the federal agency responsible for distributing aid internationally and its $20 billion budget, Power will likely play a role in directing funds to organizations facilitating abortions abroad, especially given Biden’s pledge to do away with the Mexico City Policy.”

Pete Buttigieg, who endorsed abortions at any stage of pregnancy, has been named Biden’s Secretary of Transportation. As South Bend Mayor, Buttigieg protected the then-unlicensed abortion business Whole Woman’s Health of South Bend and simultaneously opposed the opening of a pro-life pregnancy resource center near the abortion facility.

Allie Panther, a former Biden for President Director of Scheduling has been named to Biden’s Department of Transportation (DOT) team. According to her LinkedIn page, she formerly served as an events manager for the pro-abortion EMILY’s List.

In November of 2020, the Biden team announced members of his COVID-19 Advisory Board, which included Ezekiel Emanuel, a former Obama advisor who promotes the rationing of health care. David Kessler – instrumental in bringing the abortion pill (Mifepristone) to the U.S. market through his leadership at the U.S. Food and Drug Administration (FDA) — was chosen to co-chair the Biden COVID-19 advisory board.