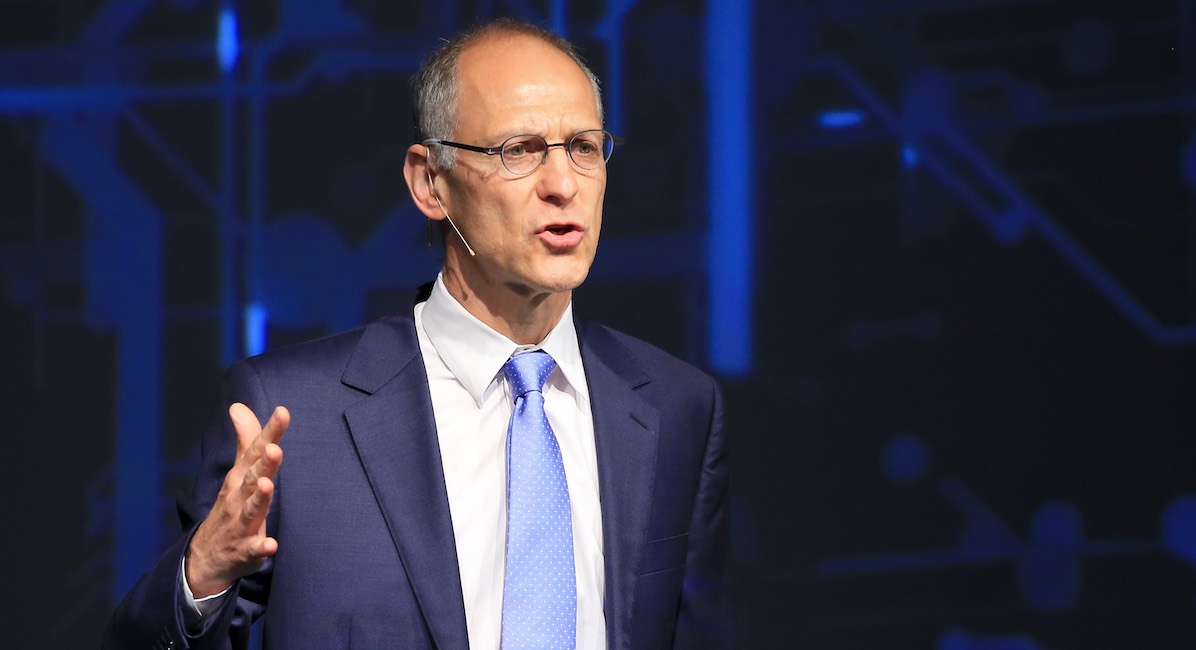 On Monday, former Vice President Joe Biden’s team announced the members of his presumptive Transition COVID-19 Advisory Board, which includes former Obama health care advisor Ezekiel Emanuel. Emanuel, 63, who currently chairs the Department of Medical Ethics and Health Policy at the University of Pennsylvania, previously served on Biden’s Public Health Advisory committee during the primary and has been outspoken in his support for “allocated” health care and abortion.

“The advisory board will help shape my approach to managing the surge in reported infections; ensuring vaccines are safe, effective, and distributed efficiently, equitably, and free; and protecting at-risk populations,” Biden said in a statement.

Emanuel’s addition to this board comes with added concerns, as hospitals have already considered rationing health care for patients with COVID-19.

The disabled and the elderly

While Emanuel has said that he does not support legalizing assisted suicide or euthanasia, he does support rationing health care for the disabled and the elderly. To ration care in order to save money, he believes, “will require changing how doctors think about their patients.” The idea of allowing doctors to assess the value of their patients has lead to concerns about “death panels” in which doctors decide whose lives are worth saving.

Emanuel co-authored “Principles for allocation of scarce medical interventions,” in which he makes the case for The Complete Lives System. This system of “allocating” health care (Emanuel likely won’t be found using the word “rationing” because of its negative socialist connotations) favors “younger people who have not yet lived a complete life….” He wrote that this system “also supports modifying the youngest-first principle by prioritising adolescents and young adults over infants (figure).” 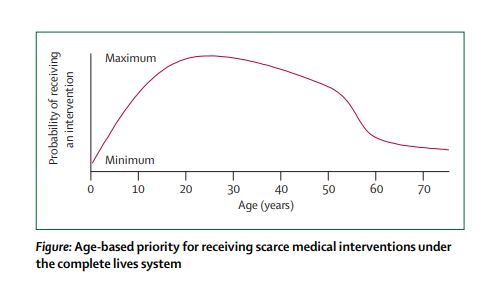 From Emanuel’s Principles for allocation of scarce medical interventions.

“Adolescents have received substantial education and parental care,” he argued, “investments that will be wasted without a complete life. Infants, by contrast, have not yet received these investments.”

The Complete Lives System also favors healthy young persons over those with a “poor prognosis.” Emanuel wrote, “A young person with a poor prognosis has had few life-years but lacks the potential to live a complete life. Considering prognosis forestalls the concern that disproportionately large amounts of resources will be directed to young people with poor prognoses. When the worst-off can benefit only slightly while the better-off people could benefit greatly, allocating to the better-off is often justifiable.”

Currently, the plan for the distribution of the COVID-19 vaccine when it becomes available will prioritize healthcare workers, people with preexisting conditions, and older people, especially those living in nursing homes. This is the opposite of how The Complete Lives System works. Given Emanuel’s writings supporting this system, it is disturbing to consider that he may be in a position to advocate for the current plan to be altered, putting the elderly and those with preexisting conditions at the bottom of the list.

In a 2014 op-ed for The Atlantic, Emanuel stated his wish to live only to age 75, and encouraged other older Americans to consider “whether our consumption is worth our contribution.” He made the assumption that being older means a person is no longer contributing to society — judging humans not based on their intrinsic value but on their perceived “usefulness” to others. Elderly Americans contribute frequently to society in many ways, including in the raising of their grandchildren and in the education of students entering the same field of study that they have mastered. Even if they face challenges such as Alzheimer’s, they have something to contribute, providing lessons in compassion, empathy, love, and commitment. While these values may not be quantifiable in dollars and cents, they are of incalculable value to society. Those who helped to create the world we live in do not deserve to be removed from it when others suddenly deem their lives burdensome and unworthy.

Emanuel has advocated for mask-wearing, which is suggested as a way to protect the vulnerable amid the COVID-19 pandemic. Yet, he does not necessarily believe the vulnerable elderly should receive life-saving care should they contract COVID-19. In his piece for The Atlantic, he discussed how he would likely refuse a flu shot after he turns 75 and would also avoid taking antibiotics. “What about simple stuff? Flu shots are out. Certainly if there were to be a flu pandemic, a younger person who has yet to live a complete life ought to get the vaccine or any antiviral drugs,” he said. “A big challenge is antibiotics for pneumonia or skin and urinary infections. Antibiotics are cheap and largely effective in curing infections. It is really hard for us to say no. Indeed, even people who are sure they don’t want life-extending treatments find it hard to refuse antibiotics. But, […] death from these infections is quick and relatively painless. So, no to antibiotics.”

Emanuel makes it appear as if this article is about himself, but he’s clearly speaking of others as well, as is evident by his use of the terms “we” and “us”: “[Living too long] robs us of our creativity and ability to contribute to work, society, the world. It transforms how people experience us, relate to us, and, most important, remember us. We are no longer remembered as vibrant and engaged but as feeble, ineffectual, even pathetic.” (emphasis added)

Regardless of exactly whom he is speaking, Emanuel’s thoughts are extreme. Antibiotic use is not an extraordinary means of saving a person’s life, and flu shots are widely available. If he is truly speaking only of himself, why wouldn’t he keep his personal decisions personal? Emanuel is in a position of leadership with the power to influence others. Those other older individuals may not be in the position to make health decisions for themselves, especially if their care is being rationed by the government. He noted that he retains the right to change his mind about his own future decisions, but the damage has already been done if he has influenced others to believe that continuing to live after age 75 is pointless. Is Emanuel’s end goal simply to share his own personal thoughts about his own personal health? Or is it to spread his utilitarian way of thinking about aging and health?

It is frightening to imagine a person with such extreme thoughts about his own health taking on a leadership role on a presidential COVID-19 task force, making decisions regarding the lives of strangers. With some hospitals considering, in practice, rationing health care for patients with COVID-19, it is disturbing to consider that Emanuel could advocate for leaving the elderly or vulnerable to die from COVID-19 should they contract it, under a Biden administration.

READ: Elderly fear they’re being ‘left to die’ in Venezuela amid coronavirus pandemic

Though abortion is never medically necessary for any reason, Emanuel has claimed that abortion “is not medically controversial,” but rather “a standard obstetrical practice.” If that were true, OB/GYNs should be lining up to commit abortions. But they aren’t. Instead, some abortion businesses have resorted to hiring failed eye doctors and radiologists to carry out abortions while pushing for laws to allow non-doctors to work as abortionists.

In “Physicians, Not Conscripts — Conscientious Objection in Health Care” for the New England Journal of Medicine, Emanuel wrote that conscientious objection should be declared “unethical” and “unjustifiable.” He believes doctors should not be allowed to refuse a patient requesting birth control or abortion. This kind of philosophy would force Catholic doctors to prescribe contraception and would also force all pro-life doctors seeking to become OB/GYNs to choose a different focus if unwilling to commit abortions or refer patients to someone who will.

He went on to say that any health care professionals who are “unwilling to accept these limits have two choices: select an area of medicine, such as radiology, that will not put them in situations that conflict with their personal morality, or if there is no such area, leave the profession.” Emanuel would prefer that doctors leave their field of practice, regardless of their skill, if they do not agree with committing a medically unnecessary procedure that deliberately kills human beings.

Bioethicist Wesley Smith warned that these ideals would “weaponize medicine to impose secular individualistic and utilitarian values on all of society.”

While Emanuel believes conscientious objections for abortion must be eradicated and doctors must do what the patient wants (even when medically unnecessary), he promotes withholding care from a disabled or elderly patient, regardless of what that patient wants.

What then, if a doctor conscientiously objects to withholding care for a patient with COVID-19?

Editor’s Note, 11/13/20: This article has been altered and updated from its originally published version.