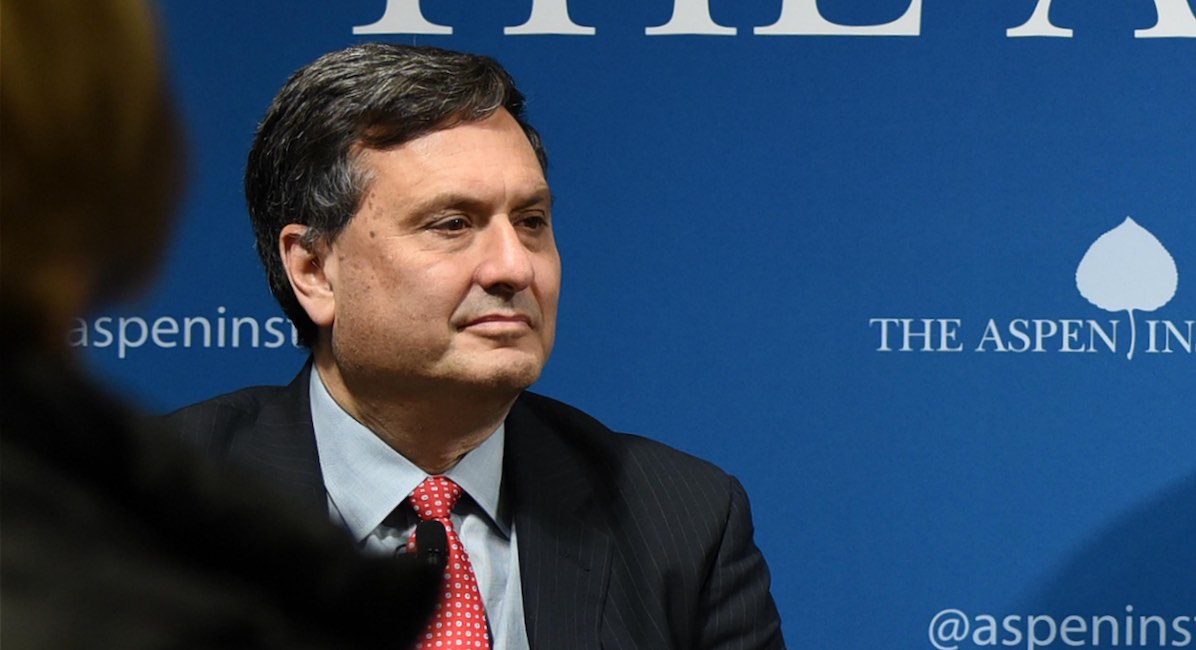 Joe Biden has named Ronald Klain as presumptive White House Chief of Staff should Biden be certified as the President-elect in coming days, despite potential legal challenges. The move comes just days after Ilyse Hogue, the president of NARAL Pro-Choice America, tweeted her support.  Klain recently celebrated abortion at NARAL’s 50th anniversary, tweeting, “It was an honor to join @ilyseh & @NARAL to mark #NARAL50 and discuss the need to protect reproductive freedom through the courts and judicial nominations.” 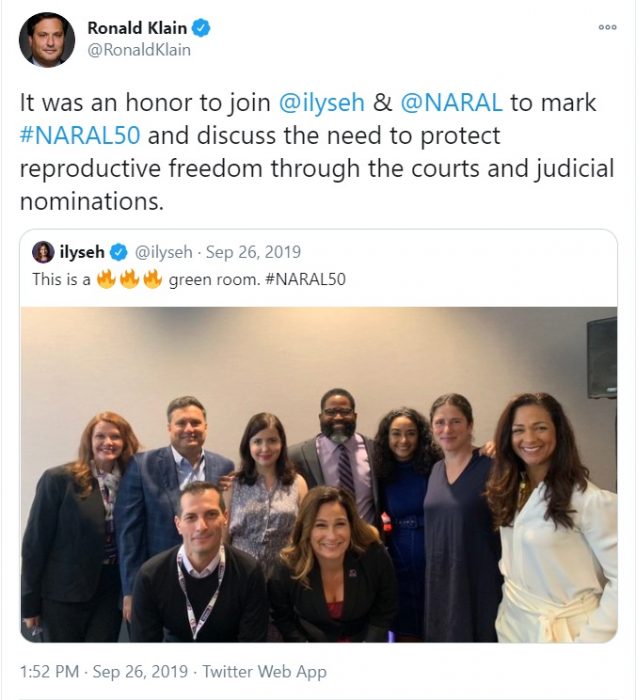 In response to a March of 2019 tweet from NARAL’s president, thanking Klain for “being a vocal leader on these issues” of abortion rights, Klain shockingly referred to himself as “[j]ust a soldier in your army @Ilyseh.” In a tweet a year prior to this, Klain referred to Hogue as a “great leader.” 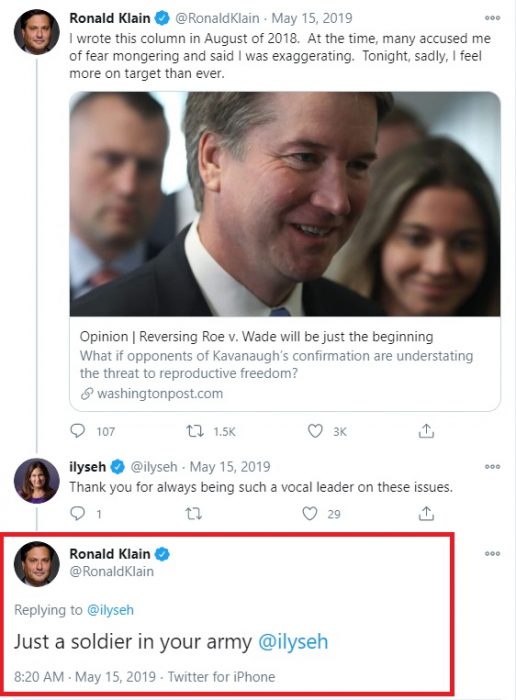 NARAL has openly praised Planned Parenthood’s white supremacist founder Margaret Sanger, and like Planned Parenthood, was founded by proponents of eugenics. As Live Action News previously reported, two of NARAL’s three member pre-formation planning committee were men who held and promoted radical racist, eugenicist ideas about population control. In addition, employees of color within NARAL have publicly accused the organization of racism (as have employees of Planned Parenthood). Despite this history, Klain called both NARAL and Planned Parenthood “heroes” on Twitter in 2019:

Klain previously served in the Obama Administration as a top advisor, and was Chief of Staff for Vice President Biden at that time. In 2014, he was named the administration’s Ebola Czar.

“Klain will oversee the Executive Office of the President and serve as a senior advisor. In addition to supporting the president-elect, Klain will work to build a diverse, experienced and talented team to help President-elect Biden and Vice President-elect Harris meet the urgent challenges facing the country,” notes the press release on Klein’s selection.

“Klain served as Chief of Staff for Vice President Al Gore, Chief of Staff and Counselor to Attorney General Janet Reno, and Staff Director of the Senate Democratic Leadership Committee. Klain was also Associate Counsel to President Clinton and in charge of judicial selection. Through his work on the Judiciary Committee, and in the Executive Branch, he has played a role in the selection or confirmation of eight Supreme Court Justices,” the statement adds.

The Clinton/Gore administration was firmly pro-abortion. His first week as President, Clinton expanded abortion. On the 20th anniversary of Roe v. Wade, he announced a series of executive orders and lifted a ban on fetal research while paving the way for the abortion pill to be brought into the United States. According to 2018 figures, the abortion pill has been used to kill nearly 4,000 preborn children. Under Clinton’s Attorney General, Janet Reno, pro-life free speech outside abortion facilities was heavily targeted.

A report published at Haaretz noted that Klain have been heavily involved behind the scenes of judicial picks:

Klain’s history with Biden dates back to Biden’s chairmanship of the Senate Judiciary Committee in the 1980s. In 1991, when the committee held the contentious Supreme Court confirmation hearing for Clarence Thomas, Klain, the committee’s top lawyer, was charged with investigating sexual harassment claims against Thomas made by Anita Hill… he also shepherded the late Justice Ruth Bader Ginsburg onto the court during President Bill Clinton’s administration – is expected by Biden aides to be a help with a Senate that may stay under Republican control. Klain himself clerked on the court for Justice Byron White.

In an op-ed published by the Washington Post, Klain referred to abortion as a “reproductive right” and called one SCOTUS justice a “threat to reproductive freedom.”

He laid out his case for the “weakening” of Roe and used terms like “right to abortion,” even referring to pro-life pregnancy centers and the March for Life as “so-called” — language which NARAL has urged the media to adopt.

For decades, the court has relentlessly weakened Roe — rejecting a right to abortion access for poor women, upholding restrictions on a woman’s right to choose, even allowing so-called crisis pregnancy centers to mislead women about their choices. An increasingly conservative roster of justices has played judicial Jenga with Roe — pulling out one underpinning after another, waiting to see what will bring it down…

… Each year, to mark the anniversary of the Roe decision, these activists gather in Washington for the so-called March for Life.  These marchers do not carry signs saying “Federalism Now” or “Let the States Decide”; they march under banners reading “Stop All Abortion” and “Abortion Kills.” Why would anyone believe they will be satisfied with a mere reversal of Roe, followed by a 50-state scramble over abortion laws? Why shouldn’t we expect that, as soon as Roe goes, they will petition the Supreme Court to ban all abortions as a violation of a fetus’s “right to life” under the 14th Amendment to the Constitution?

“To be clear, every woman’s rights are at risk if Roe is overturned,” he added.

In a response to a tweet by Vice President Mike Pence, Klain referred to pro-lifers as “anti-choice,” writing, “The anti-choice movement does not seek “federalism.” They seek to ban abortion.” 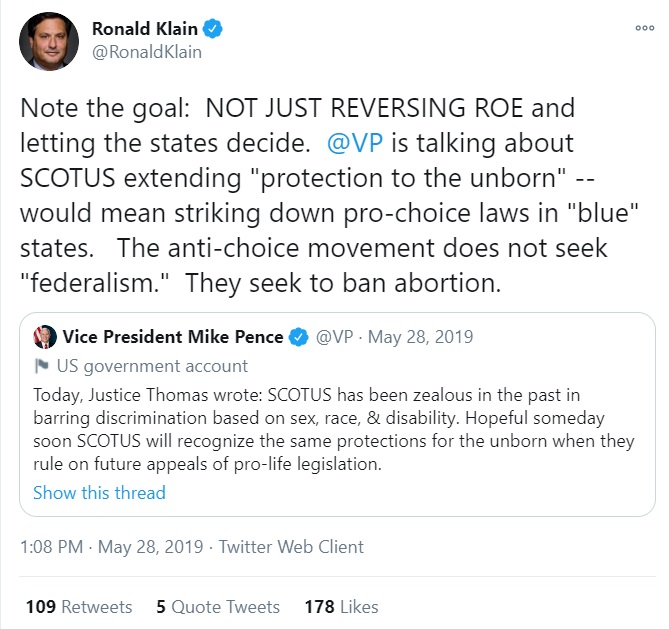 “The right is not just pursuing a reversal of Roe; they seek a constitutional rule to protect the fetus and strike down STATE laws that provide abortion rights. If you think the anti-choice movement will stop at reversing Roe, you are missing the real story here,” Klain recently tweeted.

“Every year there’s this huge project in Washington on the anniversary of Roe versus Wade and the people who march in that protest… hold up signs that say “ban abortion.” Klain once claimed. “I don’t think it will be long before we see Roe overturned.”