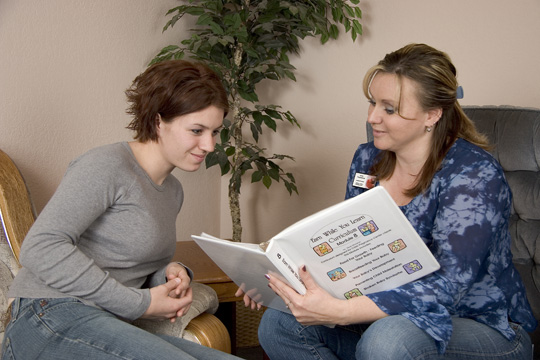 Shortly before my daughter was born, I received counselor training from a major pregnancy resource center in my home state.  I was excited to learn about this side of the pro-life movement.  I wanted to learn how to help women in crisis and help them want to keep their babies.  I was sadly disappointed.

This pregnancy center taught from a manual entitled “Equipped to Serve.”  Now, I’ll first say that there are many good principles taught and explained in this manual.  I did learn valuable lessons from the training.  However, it was not as I expected.  I thought a pregnancy center would want to show women realistic pictures of their growing, developing unborn child.  I thought they would want women to hear the truth.  Not so.  Well, at least the truth was a watered-down version.

We were trained to care about the woman more than the baby, when in reality, we should care equally about them both.  We were trained to meet the woman where she is, instead of helping her get where she could be.  We were not to talk her into keeping her baby—after all, this would be manipulative.  We would be attempting to get something that we wanted.  Somehow, trying to convince a mother to keep her child was deemed wrong.

Far from being manipulative, I believe that telling a woman the truth about the child developing inside her and showing her truly scientific pictures about life in the womb is empowering.  Countless women have said, after their abortion, “If only they had told me it was a baby.”  I still remember one of my mom’s friends sadly talking about her abortion:  “They just told me it was a blob.”

Yet, when I did my last practice counseling session, one of the biggest criticisms I received from the volunteer director of the center site was—make sure you’re sitting down—that I called the baby a baby too many times.  In fact, I wasn’t supposed to call the baby a baby at all.  I was supposed to say “a pregnancy”.  Unless the mother referred to her baby as a baby.  Then—and only then—was my language appropriate.

Needless to say, this experience greatly disheartened me.  It also infuriated me.  If you’ve seen Abby Johnson’s documentary about her switch to the pro-life side, she specifically states that Planned Parenthood taught her:  “Do NOT refer to this as a baby.”  And this is the same advice—or training, really—that we’re getting from pregnancy resource centers???

Now, I’m certainly NOT saying that people shouldn’t support, donate to, or volunteer at a pregnancy resource center.  Centers like the one I was trained at do indeed help women who want to keep their baby but aren’t sure how to do it.  They try to get women to have ultrasounds done, offer them for free, and do change some women’s minds.  I am incredibly grateful for much of their work.

But…if you can locate a pregnancy resource center near you that actually helps women in crisis; that helps women hear the truth instead of sugar coating it; that reaches out to women before they make the worst decision of their lives—choose to help that center instead.

I’ll give a great example.  Lighthouse Pregnancy Center is about to open in Stapleton (near Denver), Colorado.  It will be located across from one of the largest Planned Parenthood abortion centers in the nation.  If I have my facts correct, it ranks as the second or third largest, actually.  It’s huge.  And horrible.  You can read an “article” The Onion wrote about it here.  While they may have been poking fun at the pro-life side, you’ll recognize the cold, hard truth in what they admit about Planned Parenthood.

Rosalinda Lozano, Executive Director of Lighthouse Pregnancy Center, says this:  “Lighthouse will be bold in every way as a medical and resource center for parents in crisis. Being across the street from Planned Parenthood gives us a very unique opportunity to speak the truth with charity while we provide these women answers, resources, understanding and true empowerment.  We want the women who come to us to have a sense of real dignity and a new understanding of what authentic femininity is and what it can do for the soul.  We also want to include men in this ministry, helping them to understand how their accountability and support of these women can impact the life or death of their children.  Lighthouse will truly be a Beacon of Hope for Women and their families.”

When I asked Rosalinda what she thought of centers who ask their counselors not to refer to babies as babies, she said, “I disagree with the philosophy of centers who do not proclaim the truth boldly because women in crisis need the truth.  Women need to hear that their baby is dependent on them.  Women need to hear that their baby will be a joyful challenge in their future.  Women need to hear that abortion is the ending of the life of this child.  Women need to hear the truth!  The truth is engrained in our souls and when we hear it, we recognize it.  Most women have been lied to for so long, that when they are treated with a less than bold effort, they fall back on the status quo and continue to believe that they are weak and powerless.  This could not be further from the truth; when women are faced head on with the truth, they suddenly become aware of reality and feel empowered to make solid decisions based on fact.  Our efforts are based on the truth of Jesus Christ and only that truth can promote dignity and strength in women and their families.”

Now that’s the kind of pregnancy resource center pro-lifers can be proud to support.