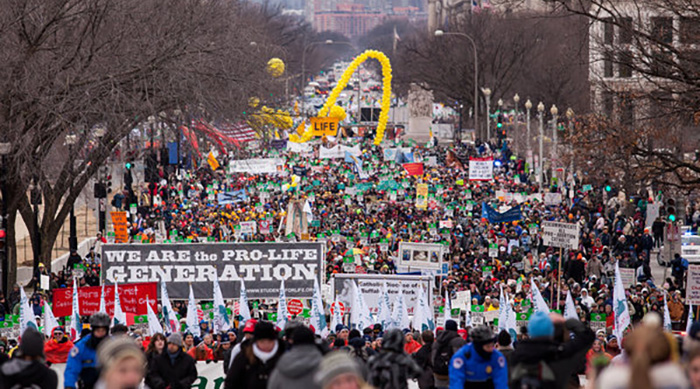 Pro-abortion blogger Robin Marty has in the past been a little fairer than most of her colleagues, but you wouldn’t know it from her latest piece at Cosmopolitan, titled “I’ve Been to the March for Life Twice. This Year It Scared Me.”

To her credit, Marty’s previous March for Life coverage was mostly fair, albeit marred by a couple digs, such as the backhanded “compliment” that “[p]erhaps anti-abortion leaders really do care a little about the wellbeing of children after they are born” (perpetuating the stereotype that there was ever any reason to doubt we care) and the bizarre speculation that pro-lifers want “a completely separate culture that they could feel comfortable in without being forced to interact with the rest of us.”

Alas, those are nothing compared to her assessment that this year’s march was “very, very different than years past, and the difference is frankly terrifying.” However, right out of the gate Marty lets a huge qualifier slip: she didn’t actually attend this year, and just watched livestreams on the internet. She conducted no interviews that yielded anything scarier than her past interviews and witnessed no attendees who said or did anything scarier than those she observed at previous marches.

In fact, she admits that according to the video, for “the most part, things hadn’t changed significantly.” So what exactly was so terrifying? Was, say, a convicted killer invited to speak this year? No, wait, that was at the pro-abortion women’s march…

But this year, the speaker’s podium at the Planned Parenthood protest was draped in red, white, and blue cloth, and rather than a solemn closing prayer for the unborn, the event concluded with a rousing chorus of “God Bless America.” It was love of God and government intertwined that I hadn’t witnessed at all in the two years prior.

Funny, I’ve been to the March for Life a few times myself (2009, 2014, and 2015), and I certainly don’t recall any arbitrary segregating of God and country (or excessive conflating of the two). And what does “intertwining love of God and government” even mean? Nothing. This isn’t anything new; secularists have always had trouble reconciling the fact that America is founded on both secular and religious principles, or that when properly understood, neither endangers the other.

Perhaps recognizing that singing “God Bless America” was awfully thin evidence on which to build a case that the March for Life is taking a sledgehammer to the First Amendment’s Establishment Clause, Marty spends the next four paragraphs detouring into complains that have nothing to do with the march.

According to her, much teeth-gnashing and garment-rending is in order because as president, Donald Trump intends to take us “down the path of American Christian nationalism”…because in his inaugural address he invoked God’s protection of the American people, in rhetoric no different (and, in fact, softer) than language leaders on both sides have always used dating back to the beginning of the country (fun fact: Trump’s inaugural mentions God five times—the same number Barack Obama did in both of his).

Where was this fear of theocratic drift when Obama took office and began invoking God—yes, including as a support for secular policies—more frequently than George W. Bush had? When just two weeks ago Nancy Pelosi said that by disagreeing with her economic views, Republicans “dishonor the God who made them”?

Next Marty (inaccurately) attacks Trump for his new executive order on immigration. What does that have to do with abortion or the March for Life? I have no idea, and I doubt anyone at Cosmo bothered to ask before green-lighting it.

She wanders back toward the general vicinity of the subject matter by freaking out that Trump apparently meant all that stuff he said about governing as a pro-life president, which is apparently shocking because his well-publicized history of personal sins should have indicated that he had no intention of following through on moral issues—making him a “Trojan Horse” or “sneak attack” for the pro-life cause.

Boy, we are through the looking glass if pursuing exactly what one campaigned on now constitutes a bait-and-switch.

At long last, on Paragraph 11 of the Cosmo piece, Marty gets back to her title subject, the March for Life. So what’s the scariness the title promised?

First, that “no president has ever been so invested in the annual anti-abortion march,” as evidenced by Vice President Mike Pence and White House counsel and Trump campaign strategist Kellyanne Conway speaking at it (but not actually, y’know, saying anything scary, unless you count Pence quoting the Declaration of Independence and Thomas Jefferson), Trump correctly pointing out that the mainstream media ignores the march, and Trump firing off the following clearly theocratic, Christofascist tweet:

The #MarchForLife is so important. To all of you marching — you have my full support!

Second, Marty freaks out at the prospect of Trump keeping his pro-life campaign promises:

Trump made a lot of promises on the campaign trail. He promised to defund Planned Parenthood and, despite the fact that nearly half of his likely voters didn’t support that idea, he intends to do it anyway.

Personally, I’d put more stock in the poll we had on November 8, 2016, but we also know that 62% of the public opposes direct taxpayer funding of abortion, so it’s safe to say wider awareness of what Planned Parenthood is really all about would change the public’s mind on its funding.

He promised to sign a federal ban on abortion after 22 weeks gestation (commonly known as the 20-week ban), one that is unlikely to have exceptions for fetal anomalies or sexual assault.

Wow, so they’d only have five months to get an abortion? Whatever shall we do?

He promised to appoint judges who would allow states to make abortion illegal again.

Even worse, if they do, Marty’s readers will find out the sky won’t fall on them after all! We can’t have that, now, can we?

And don’t forget that he promised to punish those women and girls who are caught obtaining illegal abortion services when no legal services are available, although he eventually walked that one back at the anti-abortion movement’s urging.

Fact check: by “eventually,” Marty means a couple hours later (also, it was obvious that Trump only said this because he hadn’t quite thought things through at the time).

Finally, though the connection to her supporting examples is tenuous at best, Marty at long last lays out why the God talk was so much scarier this year: it supposedly hinted at a “significant chance that we are on the verge of being the ‘Christian Nation’ that the religious right was always so determined that we be — one that worships the same God, despite this country’s First Amendment promise of freedom of religion.” She suggests this incoming theocracy will imperil not just abortion, but all the following choices:

I’m also in favor of the right to choose what God you want to worship, or if you want to worship any deity at all. I’m in favor of my children growing up and being able to choose to marry whomever they love, be that person male or female. I embrace the right to choose to come live in the United States when you are a refugee who is in danger in your homeland without having your religious beliefs subject to a litmus test that decides who gets priority [which isn’t what the EO does – CF]. I am pro-choice on loving my country when it does good and criticizing it when it does not, and I choose to believe patriotism is about questioning the government when its policies harm others.

I am pro-choice, and what I saw this weekend and what I see from this administration frightens me. Because I’m worried that very soon, there will be no choices at all.

Say what? Worshipping God will become mandatory? Criticizing the country and questioning the government will be forbidden? How? Why? Did Robin Marty really get all that from a smattering of utterly ordinary references to God?

If so, we are left with two possibilities: either the fairness approach was losing traction and Marty needed something more hostile to appease her audience, or losing what was supposed to be a cakewalk after eight years of Obama has driven abortion advocates to sheer paranoia.