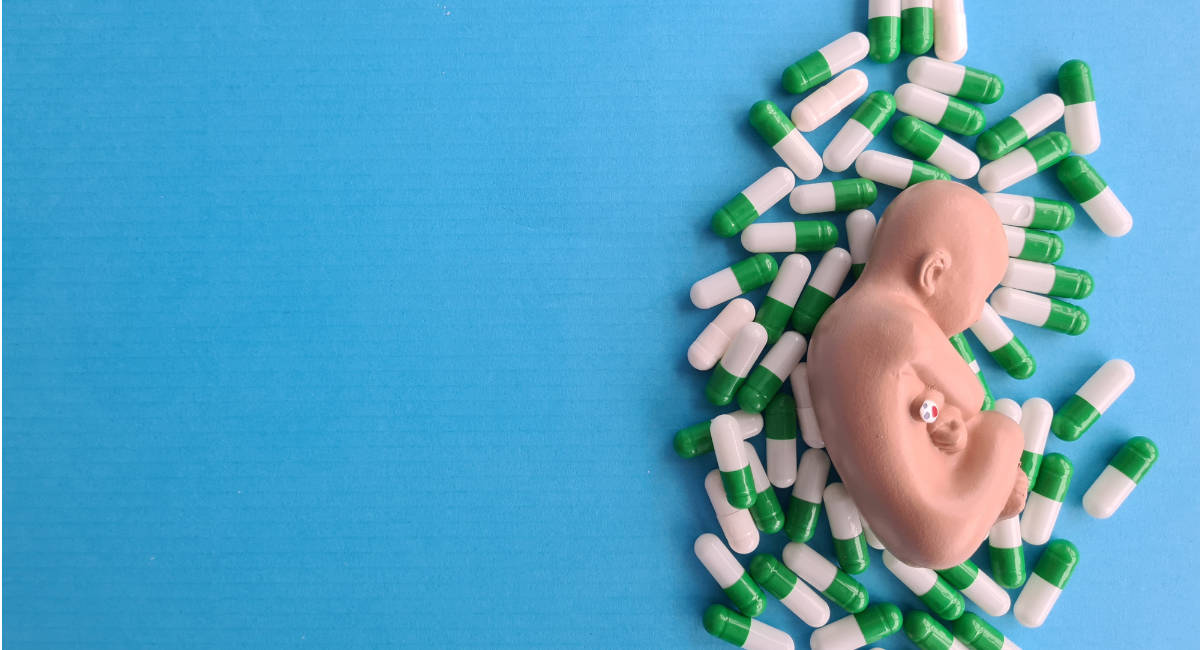 The abortion pill has ended the lives of 5.6 million babies in the U.S. since its approval in 2000, according to updated data published by the U.S. Food and Drug Administration (FDA). And in just the past year, two additional deaths have been added to the agency’s reported deaths attributed to the abortion pill.

The abortion pill, mifepristone (brand name Mifeprex), was approved by the FDA in 2000 for the termination of pregnancy in a regimen along with a second drug, misoprostol.

In December of 2018, the FDA reported 24 deaths associated with abortion pills since its approval. Then, on December 16, 2021, the FDA published an updated “Post-Marketing Adverse Events Summary” revealing that as of June 30, 2021, that number had climbed to 26.

But on January 4, 2023, the FDA updated that death count again, writing that “As of June 30, 2022, there were 28 reports of deaths in patients associated with mifepristone since the product was approved in September 2000, including two cases of ectopic pregnancy (a pregnancy located outside the womb, such as in the fallopian tubes) resulting in death; and several fatal cases of severe systemic infection (also called sepsis).” The reported deaths come with several caveats (see image below for clarification). 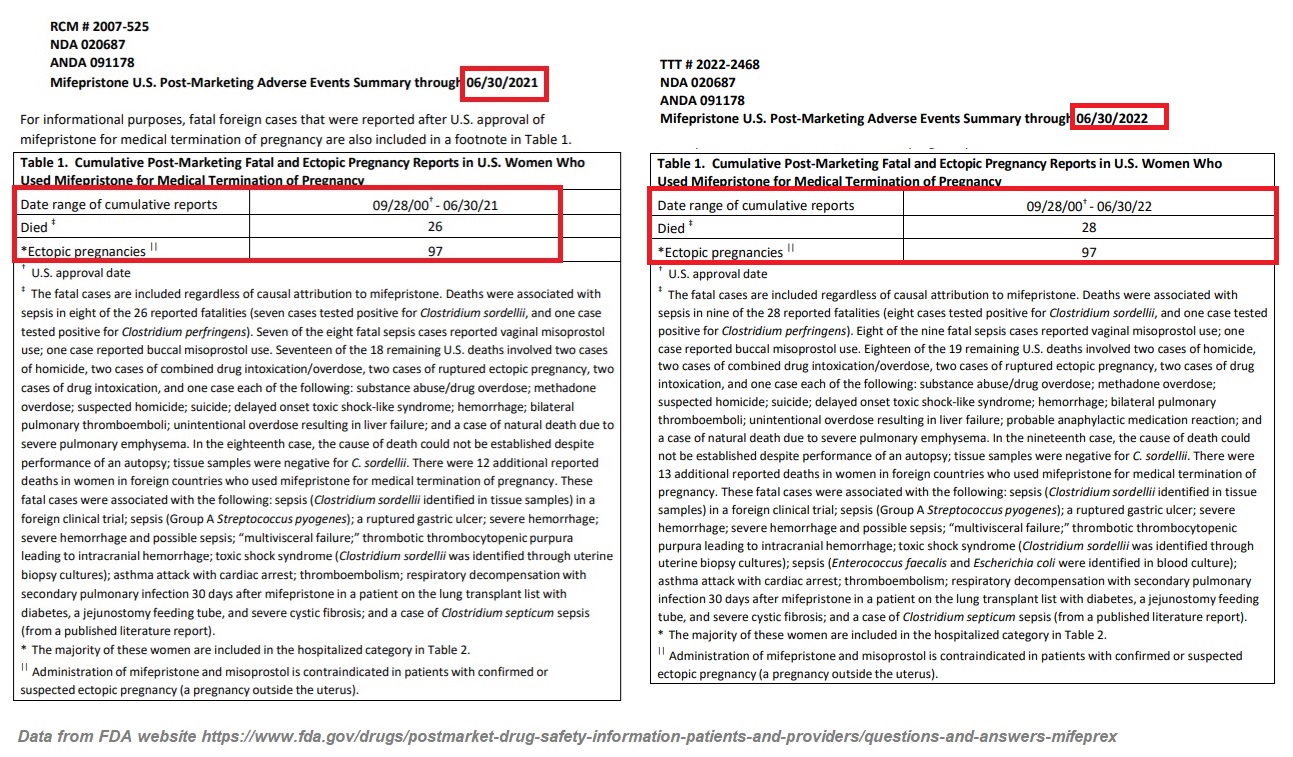 It is important to note that since abortion pill use has been increasing more rapidly in recent years, the 14% accumulative increase between 2021 and 2022 is likely to be much lower than the increase of abortions reported between the years 2021 and 2022, once that data becomes available.

Reporting of abortion pill use by FDA (comparison)

Just this week, the Biden-Harris FDA weakened important safety regulations (REMS) on abortion pills further by allowing retail brick and mortar pharmacies to dispense the abortion regimen months after they eliminated the in-person requirement by permanently allowing the abortion pill to be shipped by mail. REMS, or Risk Evaluation and Mitigation System, is a “drug safety program that the… FDA can require for certain medications with serious safety concerns.”

According to the FDA, “The adverse events cannot with certainty be causally attributed to mifepristone because of concurrent use of other drugs, other medical or surgical treatments, co-existing medical conditions, and information gaps about patient health status and clinical management of the patient.”

The Population Council, a eugenics-founded “non-profit,” brought the abortion pill (known then as RU-486) into the U.S. and later set up the pill’s manufacturer, Danco Laboratories, LLC, a sub-licensee of the Population Council. The FDA’s abortion pill approval process, which culminated in 2000, has been highly secretive as Live Action News has documented. Tragically, shortly after approval, deaths were reported, and over the ensuing years, abortion pills deaths climbed.* Read more about this tragic history here.

In May 2020, Columbia University journalists Lauren Mascarenhas and Abigail Brone interviewed early abortion pill advocates including Dr. Beverly Winikoff, who was employed at the time by the Population Council as the Program Director for Reproductive Health — and was the person in charge of the abortion pill’s clinical trials.

In a stunning admission to these journalists, Winikoff credited the 9/11 terrorist attacks with ‘saving’ the abortion pill, after news of the attack overshadowed the news of a woman’s death attributed to the abortion pill. In 2003, Winikoff left the Population Council to found Gynuity Health Projects, which is heavily funded by abortion pill investors. Under Winikoff’s direction, Gynuity sponsored abortion pill clinical trials, including experiments on African women, and a TelAbortion trial willing to mail abortion drugs to girls as young as 10.

In April of 2011, the FDA reported over 2,200 adverse events associated with the abortion pill. At the same time, post-marketing reports at that time showed 14 women had died, 612 were hospitalized, 339 women had experienced blood loss severe enough to require transfusions, and several hundred reported cases of infection — some severe.

It was in this year that the FDA determined that a REMS was necessary for mifepristone.

According to the June 30, 2022 report, the data showed (image below) an increase to 4,203 adverse events, including 1,048 hospitalizations, nearly 604 instances of blood loss requiring transfusions, and other serious complications. The FDA also recorded 414 infections, with 71 being categorized as “severe based on medical review of the available case details.”

Keep in mind that under 2016 changes put in place by the Obama administration’s FDA, the FDA no longer mandated abortion pill manufacturer Danco Laboratories or GenBioPro (the pill’s generic manufacturer) to notify the FDA of complications (adverse events) other than death. Therefore, there is no way to truly know the number or types of adverse events that took place due to the abortion pill after 2016. 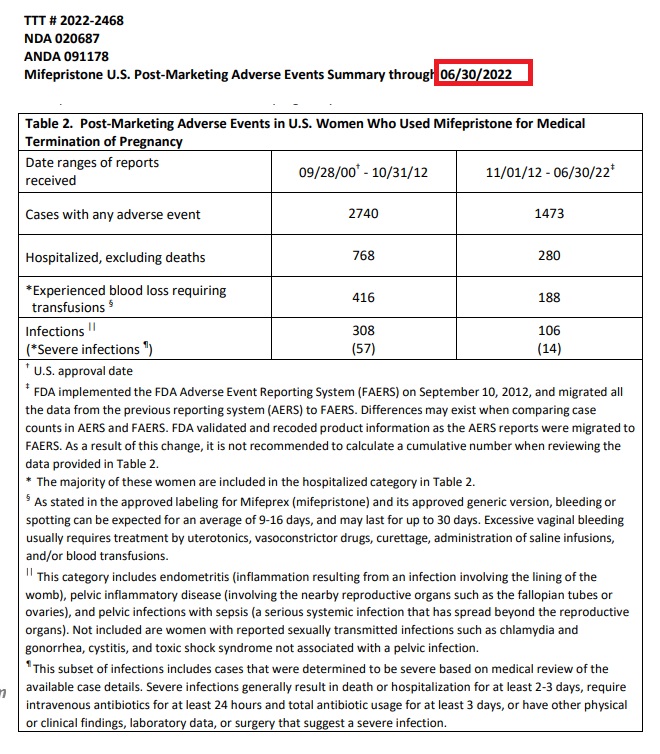 The FDA wrote, “The following information is from United States (U.S.) post-marketing reports received by FDA of adverse events that occurred among patients who had taken mifepristone for medical termination of pregnancy. Because FDA has eliminated duplicate reports, and in some cases, reclassified the adverse event terms for individual cases after reviewing the narrative details, the numbers provided here may differ from the numbers of the reports that may be obtained through Freedom of Information Act requests.”

“Health care providers should review the approved labeling for Mifeprex and the approved generic, Mifepristone Tablets, 200 mg. The signs and symptoms they should watch for are included in the labeling, available here,” the FDA added.

Recently, Dr. Daniel Grossman, who has led the charge to expand use of the abortion pill, reiterated his previous position that emergency room doctors should avoid documenting abortion pill complications to hide information from law enforcement in a post-Roe environment.

Stunningly, the FDA appears to be moving in lock step with this idea by eliminating specific text (see images below) from the black box warning and the patient counseling section of the abortion pill’s January 2023 label.

The text, according to the FDA’s 2019 Mifepristone label (as well as older labels), previously stated, “Advise the patient to take the Medication Guide with her if she visits an emergency room or a healthcare provider who did not prescribe MIFEPREX, so that the provider knows that she is undergoing a medical abortion (emphasis added).”

In 2020 alone, abortion pills took the lives of nearly 500,000 preborn babies while sales from the pill regimen comprised an astounding 53% of nationally reported abortion numbers, according to updated data published by Guttmacher Institute researchers. Abortion pill use is only expected to grow with the Supreme Court’s decision to overturn Roe v. Wade.

The “no-test” protocol as well as politically motivated lax regulations on the part of the Biden Administration’s FDA regarding imported and domestic abortion pill sales will have the potential to place women’s lives at greater risk even as increased numbers of unregulated virtual abortion pill businesses surge.

Editor’s Note, 1/15/23: This post originally listed an increase at 70,000. This should have read 700,000. We regret the error. A note of clarification regarding cumulative totals was also added.