Today, the Trump administration announced its intent to end taxpayer-funded government contracts with the University of California-San Francisco, which uses the bodies of aborted children to perform various research. The administration plans to pursue more ethical research. The move follows undercover investigations by the Center for Medical Progress (CMP) exposing how Planned Parenthood did business with fetal tissue procurement agencies. The announcement also comes after 74 Members of Congress sent a letter to Secretary Alex Azar asking for an HHS-wide moratorium on funding research that uses the body parts of aborted babies. As previously reported by Live Action News, very recently, a University of California government-funded lab mistakenly sought to obtain aborted fetal body parts from CMP.

In summary, the decision makes five specific changes, which Live Action has applauded: 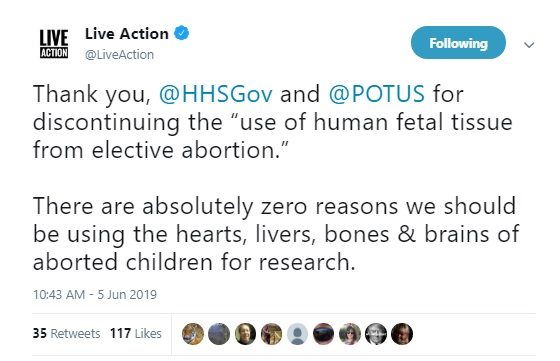 A statement from the Department of Health and Human Services (HHS) said the decision followed a September 2018 move by HHS to “terminate[] a contract between Advanced Bioscience Resources, Inc. (ABR) and the Food and Drug Administration [more here] that provided human fetal tissue from elective abortions to develop testing protocols.” Live Action News previously documented that between 2010 and 2015, ABR payments to various Planned Parenthood facilities for the body parts of aborted children totaled more than $350,000.

The HHS statement also claimed that HHS “initiated a comprehensive review of all HHS research involving human fetal tissue from elective abortions to ensure consistency with statutes and regulations governing such research, and to ensure the adequacy of procedures and oversight of this research in light of the serious regulatory, moral, and ethical considerations involved.”

HHS plans to set up an “ethics advisory board” which will review new research proposals for new project grant applications or current research projects that propose to use fetal tissue from elective abortions. The board will “recommend whether, in light of the ethical considerations, NIH should fund the research project….”

In addition to ABR, HHS will no longer extend a contract to UCSF for research using fetal body parts:

When the audit and review began, HHS had an existing contract with the University of California, San Francisco (UCSF) regarding research involving human fetal tissue from elective abortions. HHS has been extending the UCSF contract by means of 90-day extensions while conducting its audit and review. The current extension expires on June 5, 2019, and there will be no further extensions.

UCSF, which trains abortionists, has been pushing for the expansion of abortion via the abortion pill and pushing for the lifting of important safety requirements — REMS — put in place by the FDA. UCSF is part of the University of California (UC) schools and, as previously documented, UC’s latest financial audit (2018) reveals that “In 2018, federal grants and contracts revenue increased $43.0 million, or 1.3%, as compared to 2017.” All UC projects funded by NIH in FY 2019 total over $77,000,000.

“The audit and review helped inform the policy process that led to the administration’s decision to let the contract with UCSF expire and to discontinue intramural research – research conducted within the National Institutes of Health (NIH) – involving the use of human fetal tissue from elective abortion. Intramural research that requires new acquisition of fetal tissue from elective abortions will not be conducted,” HHS added.

Controlled clinical trials with fetal tissue transplants have revealed results that were “tragic, catastrophic.” The NIH has not funded any fetal tissue trials in over a decade, but approximately $100 million of taxpayer money currently goes toward basic science experiments using aborted fetal tissue. That money would be vastly better spent on ethical research with considerably better chances of success, such as using adult stem cells which are obtained without destruction of the donor. Adult stem cells have become the gold standard for stem cell treatment, producing hundreds of documented benefits, and have been used to treat nearly 2 million patients.

Live Action News has documented the government’s long history of funding research utilizing aborted children, including contracts with the Environmental Protection Agency. Links to that important historical series are below:

In addition to cracking down on taxpayer dollars funding current research, HHS noted they plan to continue to focus on more ethical research and “review whether adequate alternatives exist to the use of human fetal tissue from elective abortions in HHS-funded research and will ensure that efforts to develop such alternatives are funded and accelerated.”

“Promoting the dignity of human life from conception to natural death is one of the very top priorities of President Trump’s administration,” the HHS release stated.