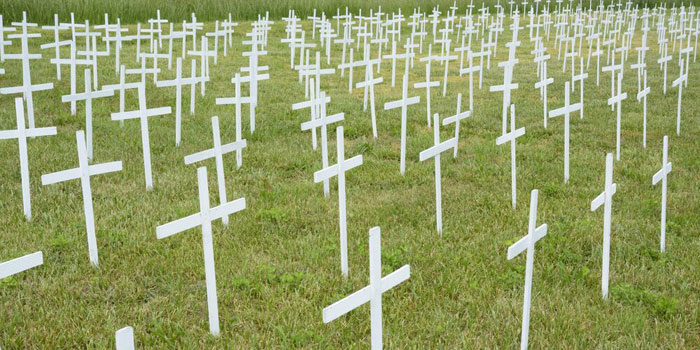 Abortion totals in the United States have hit a staggering number since the infamous Roe v. Wade Supreme Court decision legalizing abortion across the nation was decided in 1973. Abortion is the homicide of a preborn child in the womb, carried out in an extremely violent manner. The most recent published data on abortion numbers by Guttmacher is from 2017, where the Institute recorded 862,320 abortions that year, or 2,363 every day. But since 1973, the number of human beings killed by legal abortion in the U.S. amounts to an estimated 63,500,000.

While data on abortion before the early 1970s may be overstated and is not considered reliable, it was in 1969 that the Centers for Disease Control and Prevention (CDC) began an abortion surveillance branch to document the number and characteristics of legally-obtained abortions. Planned Parenthood’s former “special affiliate” and research arm, the Guttmacher Institute, did not publish abortion data until 1973. Yet Guttmacher tends to be more comprehensive in gathering abortion totals from each state, and therefore, the data used to estimate 63.5 million total abortions since Roe was collected by Guttmacher through 2017 (the last officially reported year) and was estimated for the remainder of years through 2021.

Below are data on abortions in both the United States and worldwide — and the death toll is staggering. 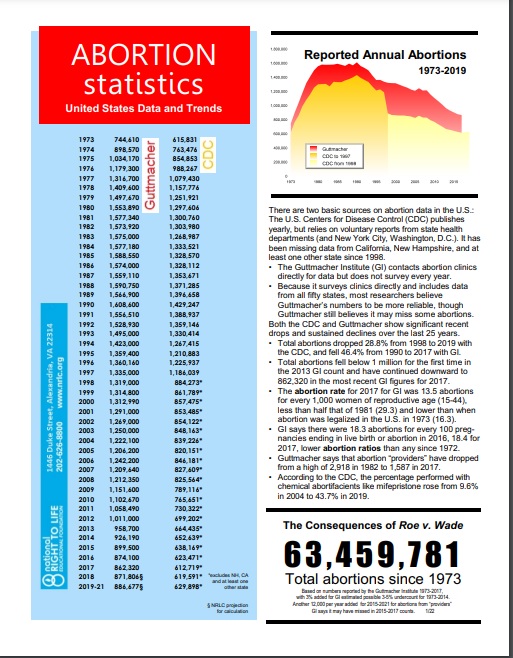 Abortions since 1973 estimated by National Right to Life (NRTL)

The abortion pill (Mifeprex) was approved by the Food and Drug Administration (FDA) in 2000 in what some view as a secretive process. By 2020, the abortion pill “crossed the threshold to become the majority (54%) of all abortions committed in the United States,” according to a preliminary analysis by the Guttmacher Institute.

It is now estimated that 465,000 babies are killed by the abortion pill annually, and as of June of 2021, the abortion pill has tragically ended the lives of nearly 5 million preborn babies since its approval in 2000. This likely grosses the industry an estimated $300 million each year.

While the CDC notes that between 1998 and 2018, eight areas in the U.S. did not report abortion data on a yearly basis, those that did report recorded nearly 450 women’s deaths from legal abortion between 1973 and 2018 with additional amounts reportedly killed in illegal abortions. The CDC has not published abortion-related deaths for 2019.

For example, a 2021 review of European countries by the Charlotte Lozier Institute (CLI) found that 47 out of 50 European nations limit elective abortion prior to 15 weeks gestation.

In 1999, Guttmacher claimed, “About 26 million women have legal abortions each year, and 20 million have abortions in countries were abortion is restricted or prohibited by law.” Today, Guttmacher claims (and the World Health Organization (WHO) agrees) that 73 million babies are killed by abortion worldwide per year.

Each abortion violently ends the life of a developing human person — and sometimes ends a mother’s life as well. A leaked draft opinion penned by Supreme Court Justice Samuel Alito may indicate that the Court is positioned to overturn Roe v. Wade, making abortion once again a state rather than federal issue.

But even if this is the final opinion of the Court, it is not the final justice for preborn lives until their constitutional right to life has been guaranteed in every state in the land.