3/2/20: In a previous report, Live Action News documented a clinical trial which is recruiting children and adult women for late-term abortions from 13-22 weeks in the West African nation of Burkina Faso. Now, the abortion industry is targeting Latin American women in Colombia for a clinical trial dispensing the abortion pill from 13 to 18 weeks gestation. Both trials are sponsored by Gynuity Health Projects, which has been working to expand abortion. Currently, the abortion pill is only approved for abortion up to 10 weeks of pregnancy.

The Colombia study, which has not yet begun to recruit, seeks to “evaluate the safety, acceptability and feasibility of a shortened outpatient procedure for medical abortion at 13-18 weeks gestation. It also seeks to document the roles of health workers in providing services related to later abortion care.”

Gynuity is funded (see here) by abortion pill manufacturer DANCO’s original business investors, the Packard Foundation and Buffett Foundation, as well as the Population Council. Packard’s money trail to Gynuity appears to have been scrubbed from Gynuity’s site, but remains online in a cached version. Gynuity is also funded by Ibis Reproductive Health (see 2017 990 report), an organization that is directly funded by DANCO Laboratories. The circular money trail is extremely concerning and has yet to be investigated by any mainstream media outlets. 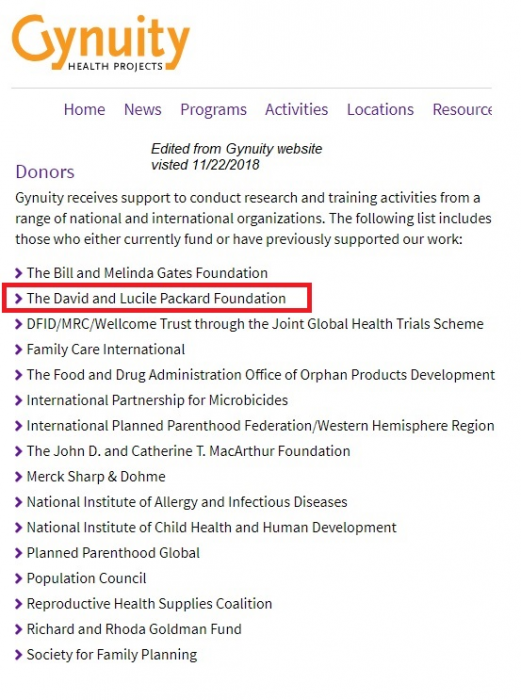 The Colombia trial will take place at Fundación Oriéntame, described in 2014 by California Sunday as “a network of abortion resources that could be described as Latin America’s equivalent of Planned Parenthood… helping to create more than 600 clinics in ten Latin American countries and for reshaping abortion politics across the continent….”

“In 1990, their board of directors formed a second nonprofit called Fundación Educación Para la Salud Reproductiva (ESAR),” California Sunday noted. “They designed it to function somewhat like a franchise, helping doctors, nurses, and midwives in other Latin American countries set up their own Oriéntame clinics.”

[…M]ost of ESAR’s roughly $500,000 budget came from private donors, including the Packard Foundation; in 2001, following a shift in organizational strategy, Packard announced that it would cease all funding….One of her donors introduced her to a large American foundation spending hundreds of millions of dollars on international reproductive-health work. (The foundation donates on a condition of anonymity.) Several years of courtship followed. Finally, in 2008, the foundation came through with a multimillion-dollar grant, increasing ESAR’s budget tenfold.

This 2008 tax document indicates the “anonymous” funder is the Tides Foundation, which gave the Latin abortion chain $550,000. In 2010, the Tides Foundation also funded an international conference on abortion pill expansion along with IBIS, Planned Parenthood, and the National Abortion Federation. 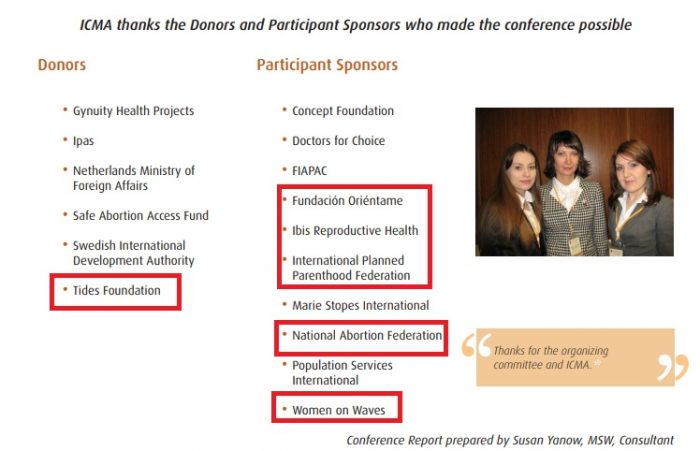 The Colombia trial will be managed by Fundación Oriéntame staffers Maria Mercedes Vivas and Juliette Ortiz, as well as Gynuity staffers Ilana G. Dzuba and founder Beverly Winikoff. According to an online bio, “Before starting Gynuity in 2003, Dr. Winikoff was employed for 25 years at the Population Council where she was Program Director for Reproductive Health and a Senior Medical Associate.” The Population Council, a eugenics based organization, brought the abortion pill into the U.S. and set up the pill’s manufacturer, DANCO Laboratories, LLC. Ironically, Winikoff has also had a previous contract with DANCO. 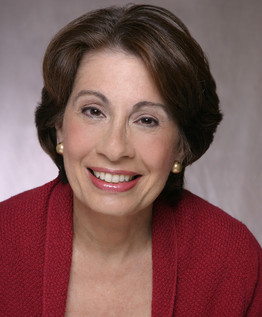 Gynuity is also behind the controversial “menstrual regulation” experiments as well as a TelAbortion clinical trial. Live Action News previously documented how Gynuity’s TelAbortion trial functions more like a Trojan horse by expanding into additional states, extending the deadline and adding participants, all in an effort to skirt important safety regulations put in place under the FDA. As of the date of this article (March 1, 2020) the now defined “case-only” (instead of “cohort”) clinical trial currently intends to enroll 1,000 participants with age eligibility as young as 10 years old.  Many of these pill experiments will take place at Packard-funded Carafem abortion facilities as well as Packard and Buffett-funded Planned Parenthood.

In the U.S., the abortion pill regimen is only approved for use through 70 days (10 weeks) of pregnancy. The FDA’s 2019 label for Mifeprex makes it clear that the failure rate increases as the gestational age advances. This is backed up by a Planned Parenthood document as well as current online information for patients, which reveals a failure rate of 7 to 9 percent when used for abortions from nine to 10 weeks. One can only imagine what the failure rate will be when these dangerous pills are used at gestations far later — between 13 to 18 weeks. Gynuity states that, “If expulsion does not occur by a certain time prior to the clinic closing that day, D&E will be performed to complete the abortion.” A D&E abortion is explained in the video below by former abortionist, Dr. Anthony Levatino:

Earlier this month, Congressional leaders issued a letter of concern over what they referred to as “an unethical chemical abortion trial” in Burkina Faso. In May 2019, 100 lawmakers sent a letter to the FDA requesting the agency monitor Aid Access for illegally dispensing abortion pills prescribed by an abortionist in the Netherlands and filled by a pharmacy in India.

Now, Latin American women are the target, and one wonders what it will take for the FDA to finally halt these efforts.