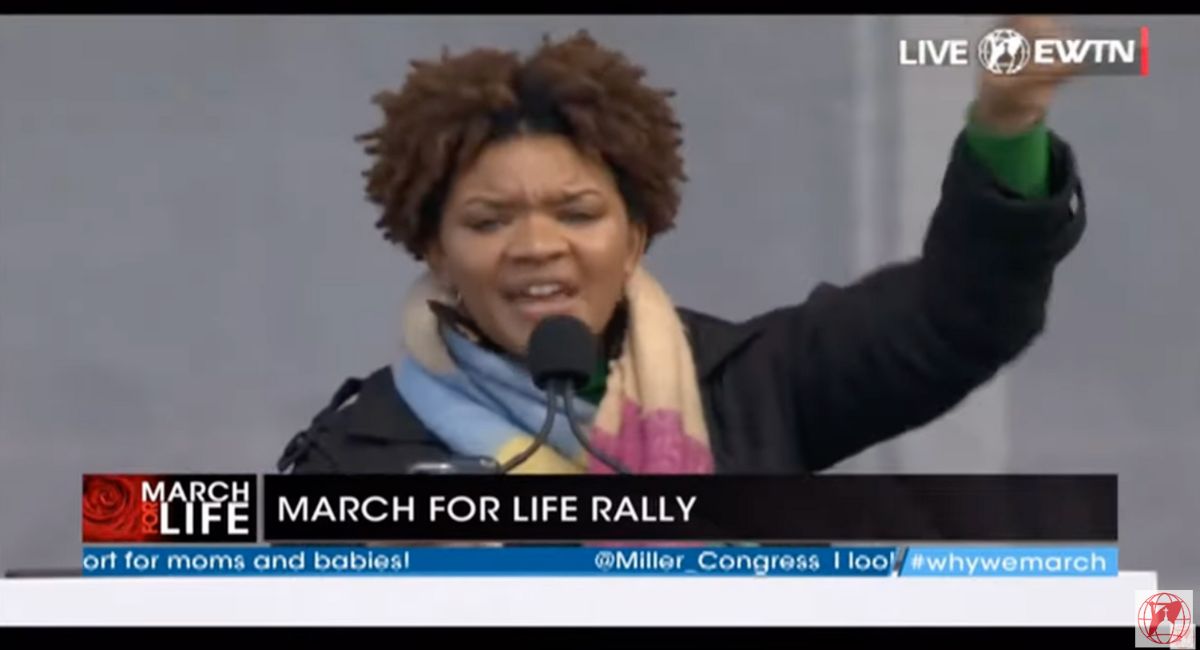 Pro-life Democrat Treneé McGee, a state representative in Connecticut, spoke at the 50th annual March for Life in Washington, D.C. on Friday, calling out the abortion industry for its racist roots that still spread today.

“To Fannie Lou Hamer and the Black women of the movement, your work to educate our community was not in vain. Your knowledge and insight into the systemically racist abortion industry is being exposed. Your ‘no’ to Margaret Sanger the day she came to your doors and told you to abort your children will be heard around the world,” said McGee. “The younger generation of Black, Latina, Indigenous, and women of color are taking our rightful place to expose the mass genocide of our children and the stain of blood across the movement that says its standing to protect us.”

Hamer was a civil rights activist who helped to found the Mississippi Freedom Democratic Party. She was also a victim of eugenic sterilization, a program that Planned Parenthood’s founder, Margaret Sanger, and those on her board advocated. Hamer referred to abortion as “Black genocide” and “legalized murder” and as the Free-Lance Star said, she “made it clear that she ‘regards it part of a comprehensive white man’s plot to exterminate the black population of the United States.'”

Still today, Planned Parenthood has shown itself to be an organization built on racism, with at least one former employee filing a lawsuit that alleges “structural racism.” And just in the past few years, Planned Parenthood has gone to great lengths to try to distance itself from Sanger, though for 100 years, they lauded her as a pioneer and hero. But the corporation’s ties to eugenics go far beyond merely Sanger.

McGee went on to speak directly to the abortion industry and abortion advocates, telling them, “You’ve mocked impoverished communities all while putting clinics in them. You’ve told me that I can’t be Black and pro-life because Black women need abortions more than anyone. You tell us that we are disproportionally impacted, never giving us our due proportions from the start. You have pocketed off the fear and pain of women and minors who don’t feel fit to parent. You’ve handed minors abortion pills in silence and told them not to tell their parents. The aches and pains of rape, trafficking, and fear of mothering has made you rich!”

As for the financial profit, Planned Parenthood, the largest abortion business in the nation, is not the desperate non-profit it claims to be. A 2020 report by American Life League’s watchdog group STOPP International revealed that the average Planned Parenthood CEO salary is $300,000. “Despite continually crying poverty and begging for funds from federal, state, and local governments, Planned Parenthood reported a total profit (income in excess of expenditures) of $425 million over the last three years—even after paying almost $16 million to its various CEOs and another $6 million to its top headquarters employees,” the report states.

In her message to the tens of thousands of pro-lifers in attendance at the March for Life, McGee said, “I stand here today and I proclaim life! I proclaim that future generations will live and not die!”

She went on to reference a horrific quote from Sanger in which she called minorities, the poor, the disabled, and those with mental health conditions “human weeds” who were “unfit.”

McGee said, “I stand in place of the pro-life Black women across the globe who are suffering in silence. And we resist the evil strategy to pluck us out like weeds. The time is today and let it be forevermore that we resolve in our hearts that we are different and yet the same! We bleed the same! Let us not use talking points to justify our arguments but be effective listeners and create whole life — from the womb to the tomb — solutions.”

She added, “May we make room to hear Black women speak and believe them in this movement. And as we march towards the prize of life, let us to understand that we must march hand in hand, that we must march together because in unity there is strength! So we must deal with our emotional prejudices in the things that we are committed to in order to not only protect life but sustain life. Because we are gonna be different! We are not only pro-life but we care about moms too. We care about families. We care about education. Pro-life for the whole life!”