During Black History Month, abortion profiteers like Planned Parenthood claim to stand with the Black community despite the fact that abortion has long been used as a tool of genocide aimed at minority communities. History shows us that these sentiments should be viewed with suspicion.

“Black people deserve access to unbiased and non-judgmental sexual and reproductive health care so they can thrive and live healthy and empowered lives,” Planned Parenthood tweeted in 2020. But message of “empowerment” appears to be a repackaging of the marketing used decades ago by the organization’s eugenicist founder, Margaret Sanger. This century-old organization is steeped in racism and eugenics to this day, presenting its agenda in terms of “health” for the minority community while purposefully recruiting minority leaders to convince minorities that they are not being targeted for population control.

Planned Parenthood has been attempting to erase various mentions of its eugenicist founder from its web pages in recent months (though it took over 100 years for the corporation to admit to her white supremacist ideals). But regardless of how many websites are scrubbed, Sanger’s views and agendas are still deeply embedded within Planned Parenthood, as accusations of systemic racism and white supremacy within the corporation continue to surface.

Sanger looked for many ways to limit the births of certain people groups — and she was not alone. Planned Parenthood’s former president, Dr. Alan F. Guttmacher, was a known eugenics leader who believed coercion would be necessary if certain populations could not be convinced to voluntarily utilize abortion to curb population growth.

When Sanger’s eugenics-based population control organization morphed into what we now call Planned Parenthood, her schemes were viewed with hostility among the Black community, a known target of eugenics. As Live Action News has frequently documented, minority leaders viewed population control efforts directed at their community as “genocide.” 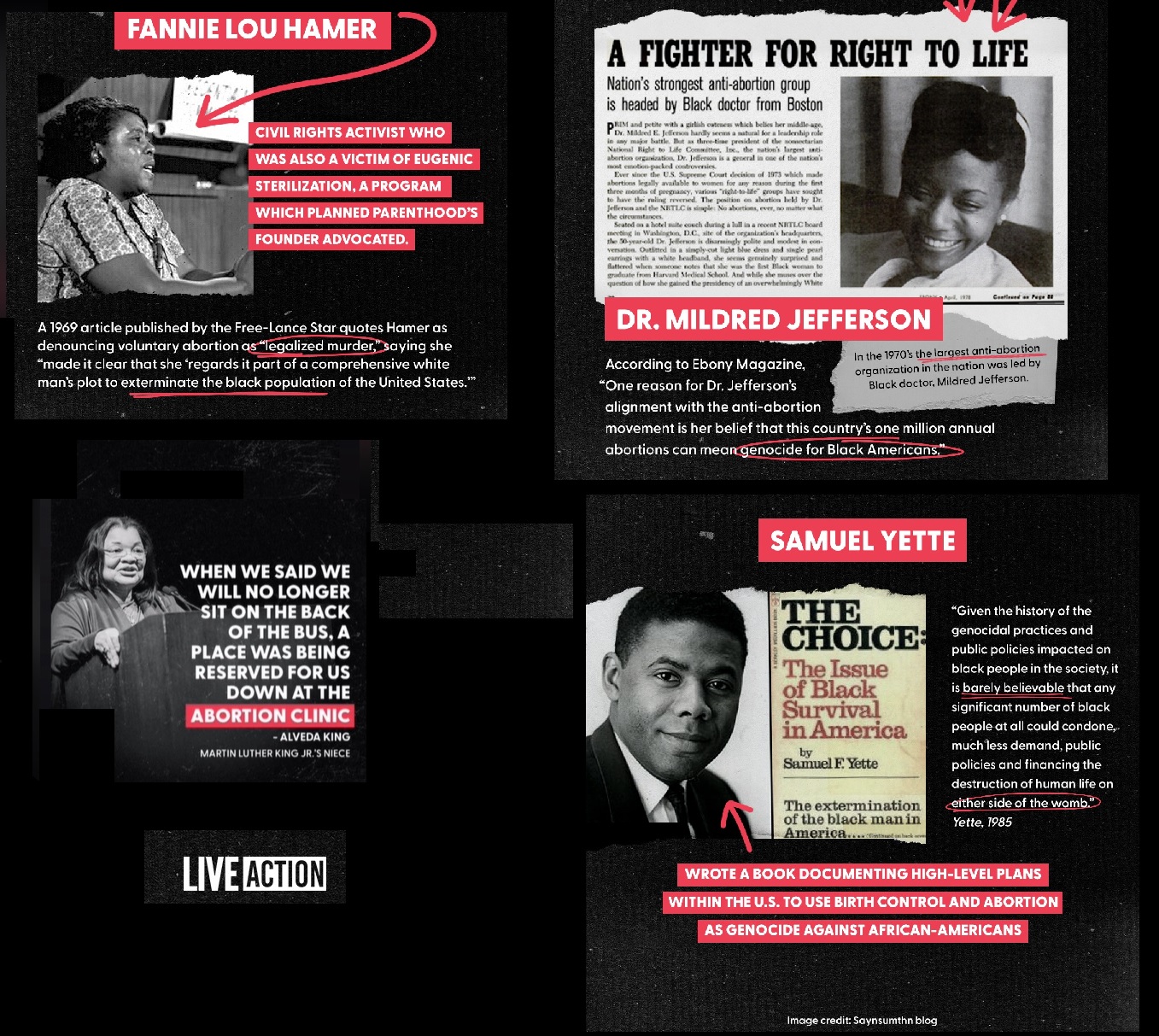 In 1967, Whitney Young, Jr., executive director of the Urban League said the push to liberalize abortion laws was based in a “desire to reduce the welfare rolls.” That same year, the Pittsburgh Branch of the NAACP criticized the packing of Planned Parenthood facilities into minority neighborhoods. A 1968 article published by the New York Times announcing Planned Parenthood’s move towards “recognizing abortion and sterilization” noted, “The Pittsburgh branch of the National Association for the Advancement of Colored People [NAACP] last year criticized family planners as bent on trying to keep the Negro birth rate as low as possible.” Other leaders like H. Rap Brown and Fannie Lou Hamer had labeled abortion “Black genocide.”

Birth control promoted as ‘solution’ to poverty and welfare

Harriett Smith, an instructor in Black Studies at a California college and founder of the organization “Endeavor to Raise our Size” or EROS, addressed the issue of population control targeted at the Black community in 1969. According to Stanford Daily, Smith identified bad education, poor judicial systems, and “pervasive institutional racism” as the problems facing the Black community — not an overabundance of Black births. In fact, Smith suggested that “efforts of planned parenthood organizations to allegedly reduce the percentage of blacks within the United States” would lead to their extinction.

Speaking on the same panel was a white health center doctor by the name of Dr. Paul O’Rourke, who favored abortion and birth control. O’Rourke admitted there were “racists who advocate birth control in an extermination effort.” He further explained that it was linked to an ideology that viewed birth control as the solution to poverty and welfare — which was exactly Sanger’s view.

Dr. Paul Cornely, then president-elect of the American Public Health Association (APHA) and Chairman of the Department of Community Health Practice at Howard University, condemned abortion and birth control programs targeting the Black community. The way to change existing social conditions is “not through making abortion available to the poor,” the Black leader told media outlets in 1969. “We need to find a better way for people to live, we have to look at the total problem,” he suggested. Cornely pointed out that abortion, sterilization, and birth control were seen as racist and as a subtle form of genocide. 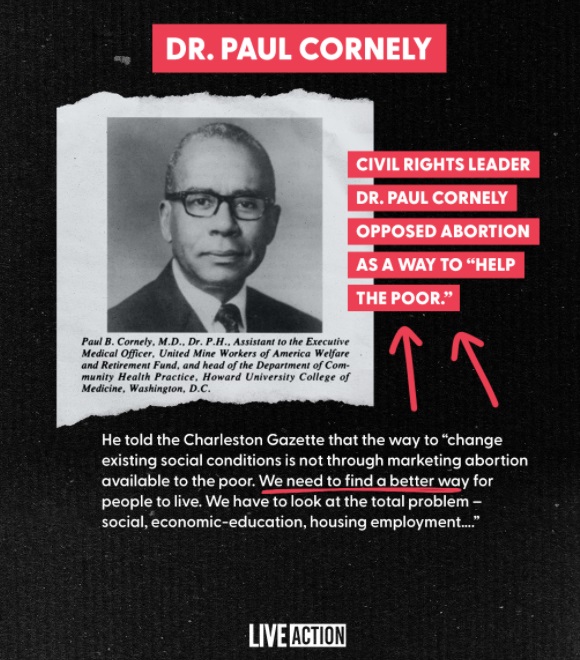 In 1970, the New York Times reported, “’Muhammad Speaks,’” the organ of the Black Muslim Movement, has charged that ‘black people are the target of birth control not because the ruling politicians like them and care about their economic equality, but because they hate them and can no longer use them plantations and other cheap labor conditions.'”

Donald T. Critchlow, author of “Intended Consequences: Birth Control, Abortion, and the Federal Government in Modern America,” noted that in 1970, Black nationalists speaking at Indiana University denounced abortion by noting that aspirin cost more money at the time than an abortion for a poor black woman. This was because the government paid for “birth control” but not for health care. Critchlow concluded that the government did not care who lived or died, as long as they did not have children.

Black family planning consultant and former Planned Parenthood World-Population VP Naomi Gray told a US population commission in 1971 that the Black community believed talk of zero population growth was aimed at their race. “To many black the zero sounds like zero black children,” Gray stated. “White interests in this question have ranged in my experience, from a desire to have the charge refuted, all the way to finding out if blacks are really smart enough to figure out that whites would like to get rid of them in some polite way.”

“It could then legitimately be said,” Gray added, “that some white interests are more concerned with causing certain black babies not to get born than they are with the survival of those already born.”

Gray’s observations were mirrored by Dr. Andrew Billingsley, VP for academic affairs at Howard University, who suggested that birth control programs had “overtones of genocide.” He also believed such programs were “aimed at stamping out black children before they get on welfare….” In 1971, Billingsley pointed out that “[o]thers have decided the black population is getting out of control and must be curbed” and said Black leaders considered these kind of programs an attempt to “legitimatize [the] extermination” of blacks. 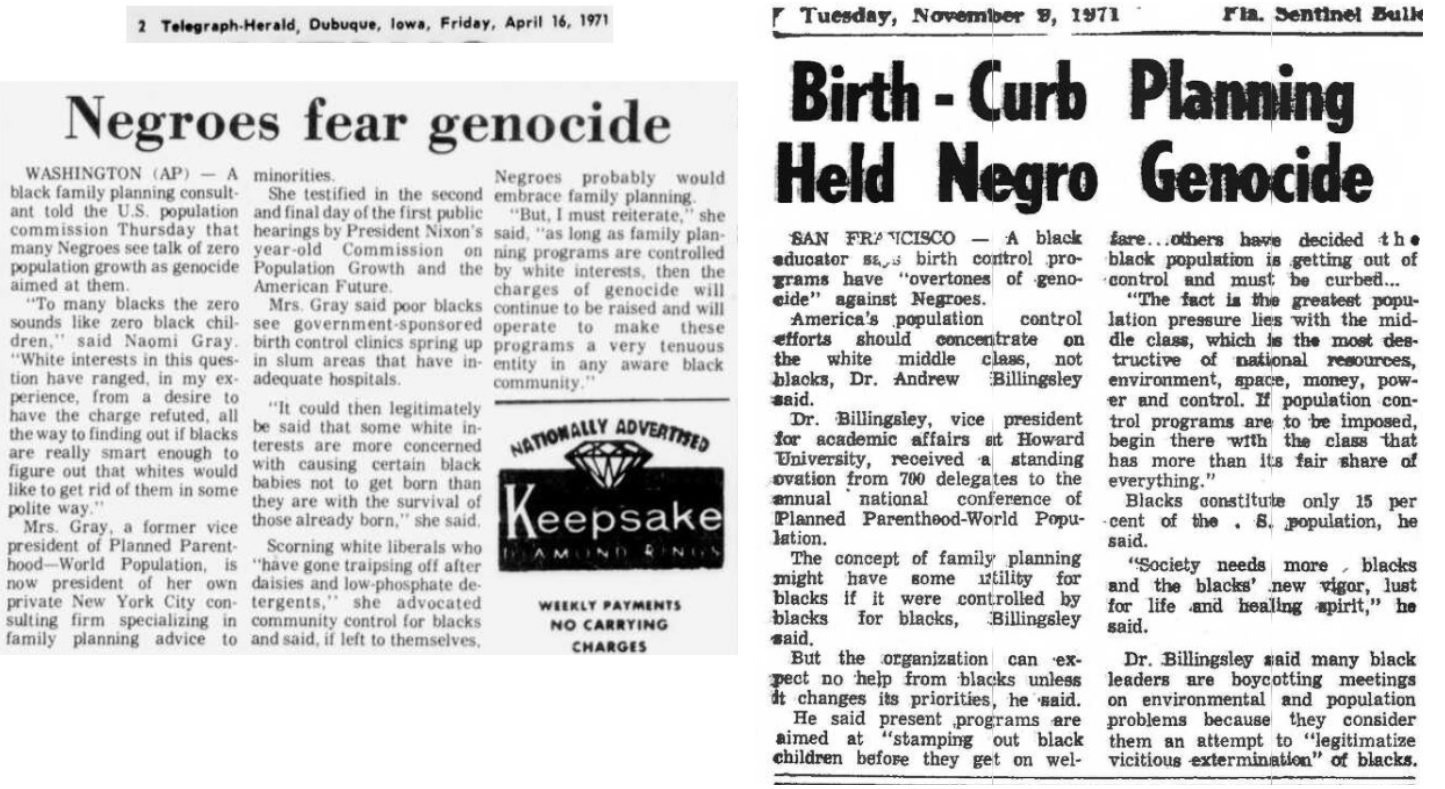 Abortion as “class war against the poor”

In an open letter to Congress in 1977, Rev. Jesse Jackson urged support for an amendment to ban federal funding of abortions. In 1978, Jackson told a pro-life group in D.C. that “allowing abortions may leave us with a hell right here on earth.” As late as May 1982, Jackson — who at that time still held pro-life views — told a national Catholic publication that legalized abortions symbolized “a definite drift to Sodom and Gommorah in our culture. All this to me is part of a great suicidal process.” Sadly, Jackson completely changed his position on abortion when he later made the decision to run for President.

In 1977, Harvard’s first Black female doctor, Mildred Jefferson, warned that abortion would target the Black community. “Blacks suffer more from abortion because what looks like help is actually striking against them. Blacks are fewer. They will disappear sooner,” she said. She called abortion “class war against the poor,” telling the Pittsburgh Press in 1977, “Abortionists argue, ‘Let the poor have abortions like the rich can.’ Then abortionists should make a list of the other things rich women have that they’re going to give to poor women.”

Dr. Jefferson was not alone, over the years, numerous Black female voices would emerge to condemn abortion.

In 2011, the Pikes Peak Region Gazette quoted James Tucker, head of a local NAACP chapter, as calling abortion “genocide, the killing of African-Americans.” By 2019, The Church of God in Christ (COGIC), a primarily African-American denomination, passed a strong pro-life resolution which stated, “Abortion is genocide. Abortion must end to protect the life of the unborn.”

The targeting of the Black community for population control and abortion should never have happened, and it shouldn’t be happening today. It’s time to recognize these efforts to disguise abortion as “empowerment” and freedom as what they really are.