According to 2020 data released by the Center for Disease Control (CDC), abortion numbers decreased slightly in 2020 while abortion pill use rose a whopping 154% since 2011. The November 25, 2022 report (released two days early) recorded 620,327 legally induced abortions reported to the CDC from 49 reporting areas.

Abortion reporting data is not required by federal law, and as such, the CDC relies solely on data from the states that do require abortion reporting. Guttmacher, however, relies on surveys it sends to abortionists, and those overall numbers tend to be more comprehensive. 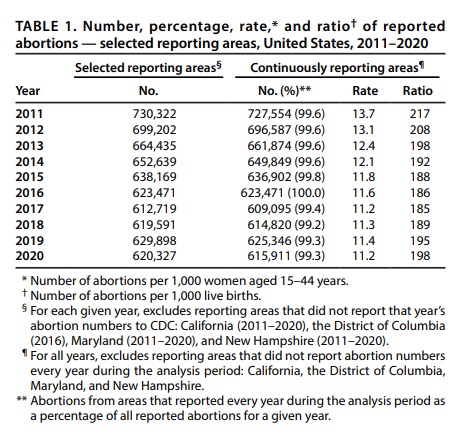 Abortion numbers decreased between 2019 and 2020 CDC

The CDC warns, “Because the reporting of abortion data to CDC is voluntary, many reporting areas have developed their own data collection forms and might not collect or provide all the information requested by CDC. As a result, the level of detail reported by CDC might vary from year to year and by reporting area.”

“The percentage of abortions obtained by out-of-area residents also varied among reporting areas (from 0.5% in Arizona to 70.7% in the District of Columbia),” the CDC explained.

Use of the abortion pill

Women in their 20s accounted for more than half of abortions

In 2020, women in their 20s accounted for more than half of abortions. “Among the 43 reporting areas that provided data each year by women’s age for 2011–2020, this pattern across age groups was stable, with the highest percentages of abortions and the highest abortion rates occurring among women aged 20–29 years and the lowest percentages of abortions and lowest abortion rates occurring among adolescents aged <15 years and women aged ≥40 years,” the CDC wrote.

Good news! The number of abortions and the abortion rate fell by 2 percent in 2020. Since abortion numbers increased in both 2018 and 2019, this is a welcome development.

An abortion-related death is defined by the CDC as “a death resulting from a direct complication of an abortion (legal or illegal), an indirect complication caused by a chain of events initiated by an abortion, or an aggravation of a pre-existing condition by the physiologic effects of abortion. An abortion is categorized as legal when it is performed by a licensed clinician within the limits of state law.”

Live Action News previously reported that the CDC recorded nearly 450 women’s deaths from legal abortion between 1973 and 2018 with additional amounts reportedly killed in illegal abortions. For 2019, “the most recent year for which data were reviewed for abortion-related deaths” the CDC claims to have “identified four abortion-related deaths,” the government agency wrote.

Live Action News intends to provide a more extensive analysis of the data in a future analysis.