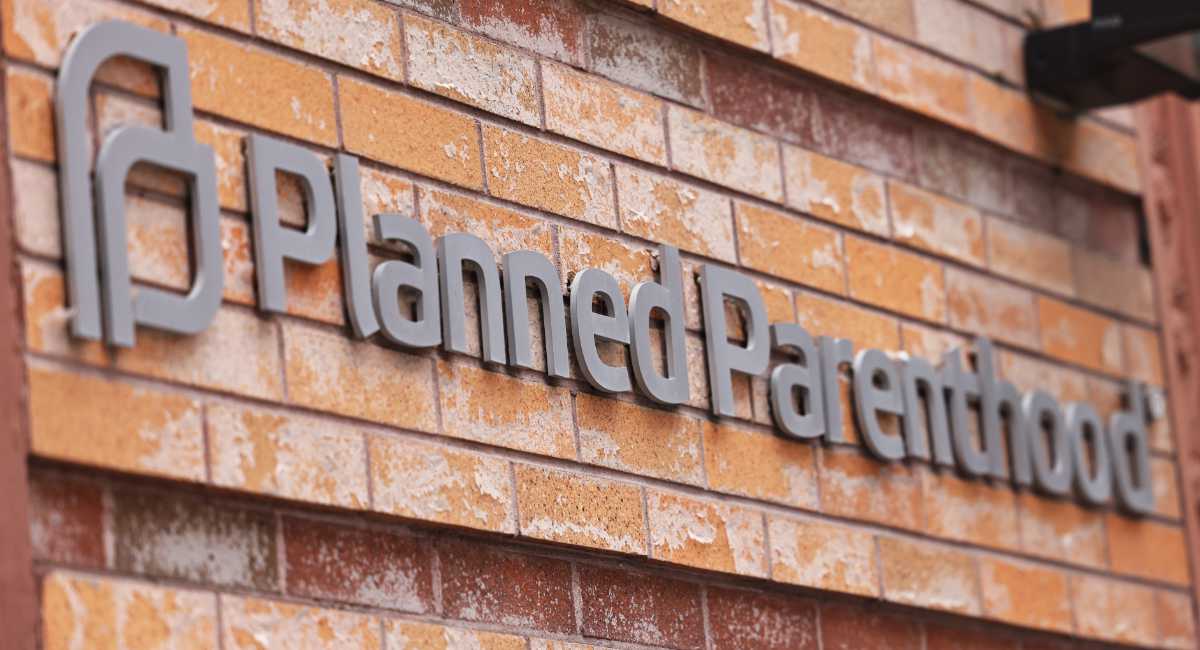 A lawsuit filed by former Planned Parenthood employee Nicole Moore claims the abortion corporation pretends it doesn’t “enable racism” while “avoiding accountability.” It also alleges that the over 100-year-old organization — which was founded upon racist, eugenic principles — has a “structural racism” issue.

“While Planned Parenthood has publicly boasted its commitment to racial equality, the organization – whose tagline is ‘Care. No matter what’ – has blatantly ignored reports by dozens of its Black employees of systemic unequal hiring and promotion, more work for lower pay, overt hostility, and trafficking in stereotypes by leadership,” Moore’s legal claim reads. “Instead of addressing the issues, Planned Parenthood has doubled down by punishing employees of color who dare to speak up, pretextually disciplining them and creating working conditions so intolerable that they are effectively forced to leave.”

When Moore politely spoke up about the inequitable distribution of work, she was falsely accused of being negative, angry, difficult to work with, and chastised for her ‘tone’ – complaints that had no basis in reality but comported with well-trafficked stereotypes about Black women. Planned Parenthood executives then proceeded to thwart Moore’s ideas, sabotage her projects, and subject her to unfounded disciplinary measures that were clearly intended to silence her complaints. The barrage of mistreatment caused Moore to suffer a panic attack so severe that she spent a day in the hospital. After complaining to HR that the disciplinary measures appeared to be retaliation for her complaints of racial inequality at the organization, she was summarily fired.

Moore, who was “tasked with increasing the Planned Parenthood’s engagement with Black and Latinx audiences,” according to her lawsuit, blasted Planned Parenthood for “willfully” engaging in “discriminatory practices with malice and/or reckless indifference to Moore’s federally protected rights.”

Moore’s allegations of “structural racism” come on the heels of other accusations that claimed Planned Parenthood has a “systemic racism” problem. And, while the 51-page lawsuit is replete with allegations of tokenism, mistreatment, and retaliation, it also alleges that Planned Parenthood “has not taken a single step to remedy the race discrimination which continues to harm its staff of color.” 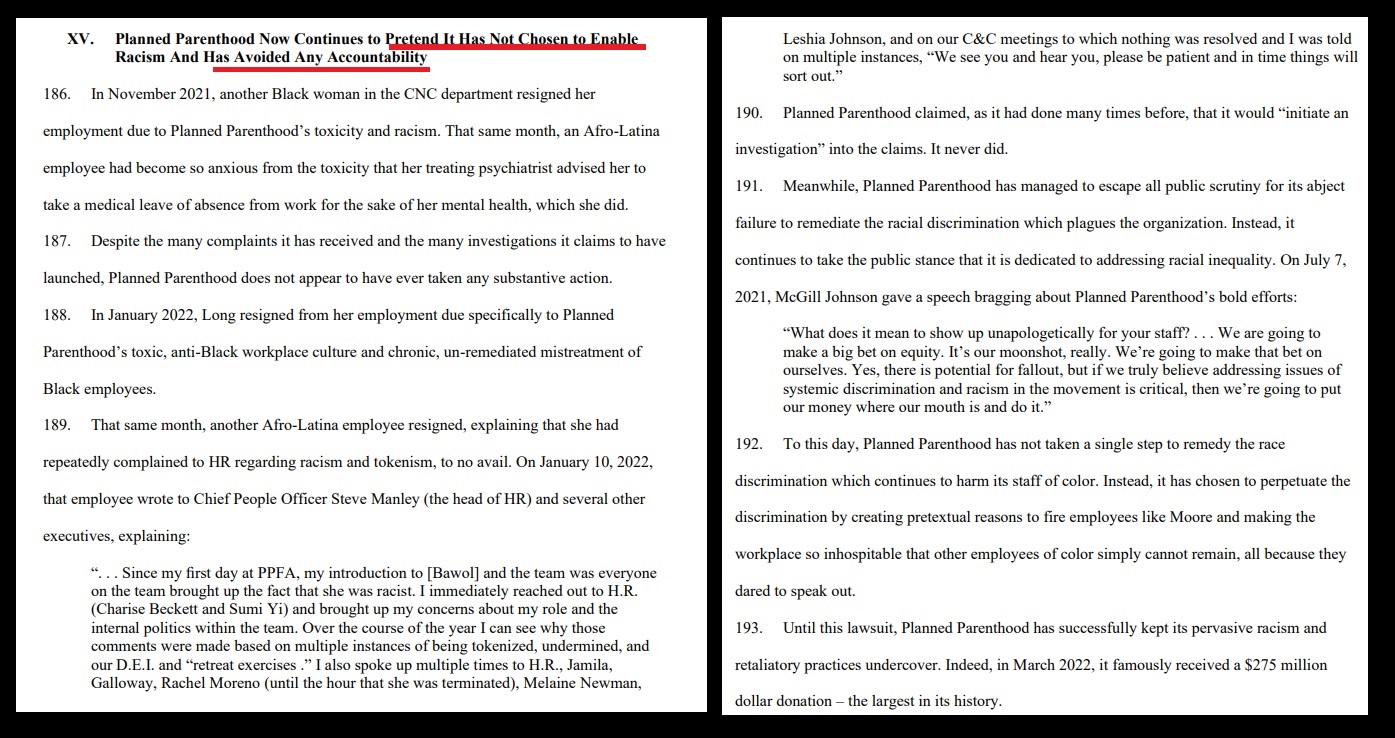 “In the complaint,” the New York Times reported, “Ms. Moore described instances in which she says she was publicly humiliated and berated in front of other colleagues by a supervisor. Ms. Moore also said that her work, which focused on outreach and campaigns geared toward Black and Latina audiences, was undervalued and understaffed. When Ms. Moore took these concerns to leaders at Planned Parenthood, she said she was retaliated against and eventually fired.”

Moore’s lawsuit alleges that during her tenure at Planned Parenthood (January 13, 2020, through November 2, 2021) she was “overlooked, overworked, over-scrutinized, tokenized, interrupted, dismissed, belittled, and abused by an openly hostile supervisor about whom many had complained about as racist.” The lawsuit openly contends that “racism was widespread at the organization.”

In her claim, Moore recounted multiple allegations of racism directed against her and other staff of color.

The lawsuit stated that when Planned Parenthood held specific discussions, they sometimes “prioritized and privileged white fragility” and that “Planned Parenthood paid no mind to the hurt its employees of color suffered during these discussions.” In addition, Moore accused the abortion corporation of “[o]penly subject[ing] Black employees to a double standard regarding contract work.”

Moore’s complaint also alleged that in one instance a Planned Parenthood superior called her out for “disagreeing with her in front of ‘white staffers.’” In addition, Moore alleged that she was “reprimanded for raising concerns about racial inequality at Planned Parenthood” adding that Moore “faced pretextual, retaliatory adverse action” and was “squarely reprimanded for raising her concerns about racial disparities in leadership,” then was “punished and fired for continuing to complain about racial inequality and retaliation.” 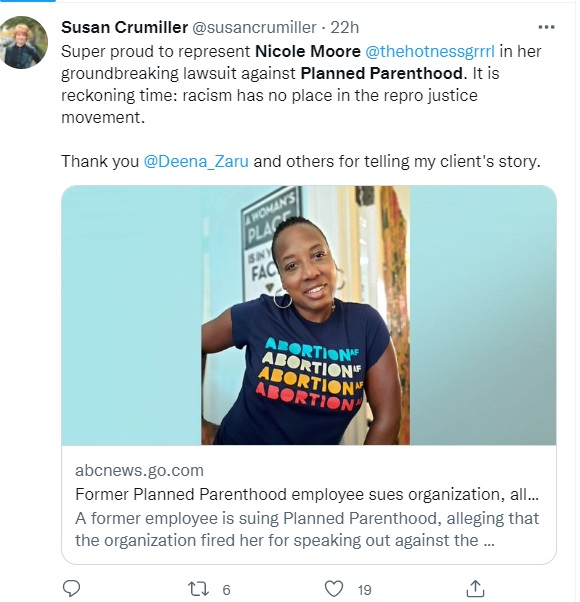 “It was clear that neither the legal department, nor HR, nor any of the executives, actually cared about the racism and pattern of retaliation that persisted in the organization,” Moore’s lawsuit also states, adding that “Planned Parenthood now continues to pretend it has not chosen to enable racism and has avoided any accountability.”

According to the court document, Moore’s direct supervisor was Ilana Gamza, the Senior Director of Brand Marketing, and Gamza’s supervisor was Rachel Moreno, the Vice President of Brand & Culture (“B&C”). The lawsuit states that “Moore quickly noticed that Moreno was inexplicably hostile toward her.”

“Moore’s colleagues soon confirmed that Moreno’s animus toward Black women was known throughout the organization. Indeed, Moore learned that her predecessor, another Black woman, had left the organization specifically because of how Moreno had treated her,” the lawsuit states.

The document also alleged that Moreno would often criticize Planned Parenthood campaigns targeted at recruiting members of the Black community and accused the Planned Parenthood VP of Brand and Culture of berating Moore in front of others for taking an “active role” in these efforts and “instructing her instead to ‘listen more’ and ‘remain quiet and observe,’” the lawsuit states.

In response, Gamza, Moore’s direct supervisor, offered a declaration in support of Moore, the lawsuit alleges.

According to the lawsuit, Moore spoke with multiple Black staffers who also allegedly complained about Planned Parenthood’s systemically racist environment.

The lawsuit described an alleged incident between Mid-Hudson Valley CEO Ruth-Ellen Blodgett and Nia Martin-Robinson, the Director of Black Leadership & Engagement, where Moore claimed that Blodgett had “reached for Martin-Robinson’s head and asked her, in front of a room full of people, if she could ‘pet’ her hair.”  When she refused the request, Martin-Robinson was allegedly chastised, the lawsuit claimed.

In a separate allegation, the lawsuit claimed that “Martin-Robinson was chided in a feedback survey for ‘playing the race card'” after she complained about another staffer. In addition, Martin-Robinson allegedly told Moore that Moreno “generally treated Black women at the organization with open disdain.”

Moore’s legal claim also alleged that Nicole Long, a Black woman who was hired as Planned Parenthood’s Associate Director of Brand Projects, claimed to Moore that she had noticed “[f]rom the start of her employment… that Black employees were treated much differently than their white colleagues. She observed that executives consistently assigned much more work to Black employees and held them to a higher, more stringent standard.”

In a separate instance, the lawsuit claimed that “Long described various instances wherein she had received unfair and unwarranted criticism and concluded, ‘these are clear and immediate examples of . . . what I meant by Brand and Culture being rooted in white supremacy.’”

In addition, Moore’s lawsuit claimed that in 2021, “Planned Parenthood deliberately drove out three of its other high-level Black employees… Rather than comply with various draconian and unnecessary restrictions Planned Parenthood had attempted to impose on them, all three opted to resign,” the complaint states.

“Moore also learned that Black observances were consistently deprioritized compared to others. Each year, staff complained that Planned Parenthood was unwilling to delegate sufficient resources to Black History Month (‘BHM’) events and campaigns and that employees were instructed to prioritize other matters, giving short shrift to BHM as compared to other observances,” the lawsuit states.

Moore’s lawsuit contends that “when Planned Parenthood needed to hire consultants, it generally hired the executives’ white friends and/or family members, often paying them as much as $10,000 to $15,000 per month – even as it failed and refused to hire additional staff members to alleviate the overwhelming workload of its employees of color.”

“When Planned Parenthood did engage contractors of color, on the other hand, it paid them dramatically less, if anything, claiming the organization ‘couldn’t afford’ to pay them more,” the document stated.

Moore’s lawsuit mentions the 2020 open letter published by employees of Planned Parenthood’s New York affiliate describing systemic racism and demanding the removal of Laura McQuade, the affiliate’s CEO at the time. It also alleged that after the racism charges were leaked to Buzzfeed News, Melanie Newman, the Senior Vice President of Communications and Culture, “announced that whoever had leaked the recording to BuzzFeed had ‘betrayed’ Planned Parenthood and declared ominously: ‘We are going to find out who did this.’” Newman also allegedly expressed concern about “a backlash among ‘white staffers.'”

Moore’s claim states that after McQuade was removed, “Planned Parenthood quietly hired an outside organization, Anti-Oppression Resource and Training Alliance (“AORTA,” https://aorta.coop/) to conduct surveys at the national office to interview Black employees about their experiences” but noted that “Certainly, nothing changed for Moore.”

The AORTA interviewer met with Moore who allegedly “candidly expressed her frustration about the ‘structural racism’ at the organization, describing it as a ‘white feminist’ organization that prizes whiteness while disregarding and tokenizing Black and brown employees” and “gave examples of how she had been undermined and then treated like an ‘angry Black woman when she objected.'”

The interviewer’s notes summarized Moore’s complaints: “Diversity, we are good at that; inclusion, we don’t have that… PPFA sucks at inclusion. You get invited to the party and you are there but you aren’t in the room where the decisions are happening. They will leave you down in the kitchen with your favorite foods, and tell you to talk amongst yourselves,” according to the court document.

“AORTA, the organization commissioned to do the survey, offers training, coaching, and facilitation services (https://aorta.coop/). However, upon information and belief, Planned Parenthood failed and refused to hire it, or any other organization, to do any actual work to remediate the problems uncovered by the survey,” Moore claimed in her lawsuit. “In reality, Planned Parenthood was doing absolutely nothing.” 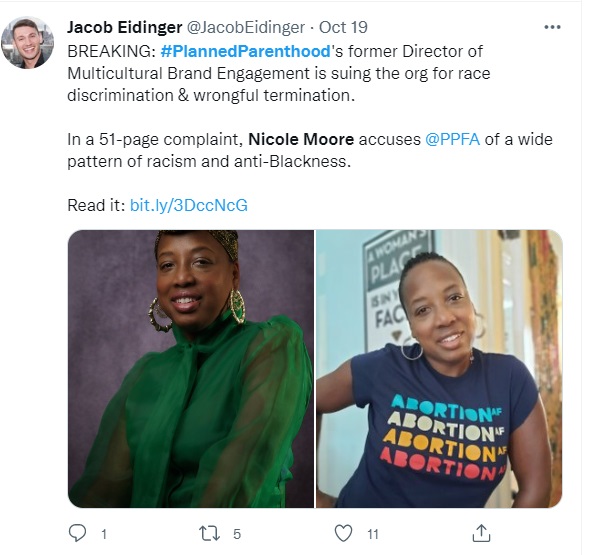 “Despite the many complaints it has received and the many investigations it claims to have launched, Planned Parenthood does not appear to have ever taken any substantive action,” Moore’s complaint states. “Meanwhile, Planned Parenthood has managed to escape all public scrutiny for its abject failure to remediate the racial discrimination which plagues the organization. Instead, it continues to take the public stance that it is dedicated to addressing racial inequality.”