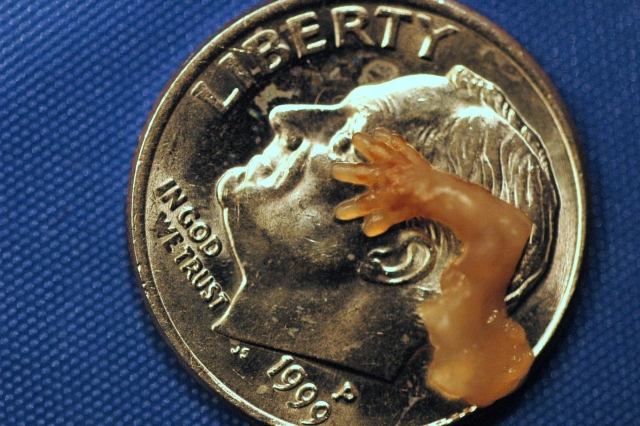 A newly released abortion statistics report from the Centers for Disease Control (CDC) reveals a reduction in the number of abortions reported in 2014. According to the CDC, over the last 10 years, abortion has seen a significant drop in the United States, with a 20 percent decrease.

CDC’s Abortion Surveillance report, released on November 22, 2017, states that 652,639 abortions were reported in 2014. This represents a two percent drop from 2013. In addition to abortion totals, the abortion rate also decreased two percent (from 12.4 abortions per 1,000 women aged 15–44 years), and the abortion ratio decreased 7 percent (from 199 abortions per 1,000 live births). The CDC report also revealed that four women died from legal abortion in 2013. 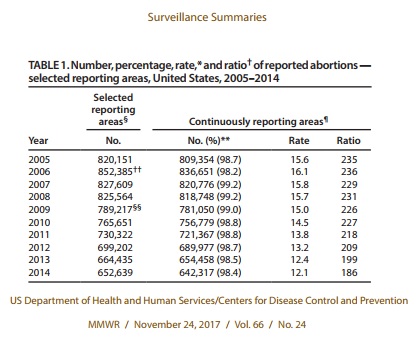 In October of 2017, Guttmacher, the former “special affiliate” and research arm of Planned Parenthood, reported an abortion total of 926,200 in 2014, far more than what the CDC claims. The CDC admits it was “unable to obtain the total number,” and pointed to “requirements by the individual reporting areas” as a reason. The CDC claims Guttmacher’s numbers are higher because Guttmacher uses “numerous active follow-up techniques to increase the completeness of the data obtained through its periodic national census of abortion providers,” a fact Live Action News has previously documented.

Neither the CDC nor Guttmacher counts the use of emergency contraception such as Ella or Plan B in their abortion numbers. This is despite the fact that each of these drugs clearly state on their label that they can prevent implantation, thus aborting a life that has begun. (There would be no way of knowing if these drugs had actually caused an abortion in a particular instance, however, and therefore, there is no way to report.)

The CDC’s report indicates that abortion data was provided voluntarily by the central health agencies of 49 reporting areas (the District of Columbia; New York City; and 47 states, excluding California, Maryland, and New Hampshire). Here are a few key findings:

The fact that women have multiple abortions is kept fairly quiet by the abortion industry, but the CDC report reveals that this does indeed occur, and more than you might expect. In 2014, there were 40 areas in the U.S. that reported the number of previous abortions, as follows:

Nearly 45 percent of women having abortions had already had at least one committed previously. 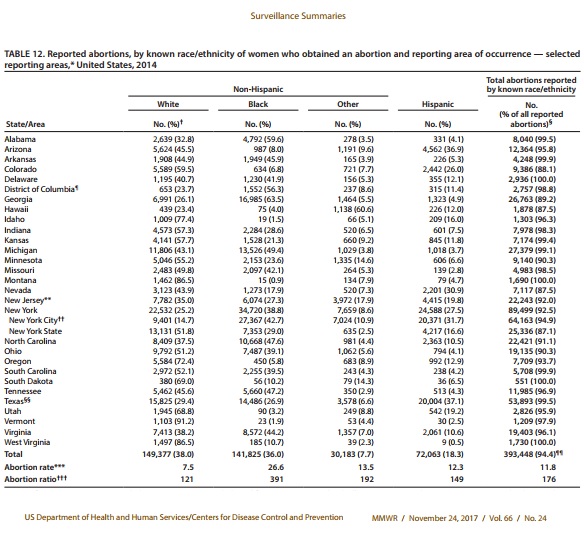 For years, pro-lifers have contended that abortion disproportionately affects the African American Community. They point to US Census Bureau data estimates, which show that in 2014, while Blacks made up approximately 13 percent of the US population, CDC figures for 2014 reveal that non-Hispanic Black women accounted for 36 percent of reported abortions that reported this criterion.

The CDC reports that 91.5 percent of abortions that report gestational age were done at less than 13 weeks, 7.2 percent between 14 and 20 weeks, and 1.3 percent at more than 21 weeks.

Notably, just 440,330 of the 652,639 reported abortions were identified by gestational age. What this reveals is that while the abortion industry would like the public to believe that late-term abortion is not happening in the U.S., 212,309 abortions were not classified by gestational age. How many abortions are committed late-term without being reported as such, or in the second trimester without public knowledge? The most common second trimester procedure is the D&E abortion.

The use of early medical abortion increased one percent from 2013 to 2014. Over a ten-year period, between 2005 and 2014, surgical abortions decreased 14 percent.

However, the CDC does report that four women died from legal abortion in 2013. This number was not available when it released 2013 abortion totals last year.

A previous Live Action News report identified at least two of the four women who are known to have died from legal abortion in 2013:

While the CDC has not reported abortion deaths after 2013 yet, it is known that multiple women have died due to a botched abortion from 2014-2016. A Live Action News article identified the following women’s abortion deaths: 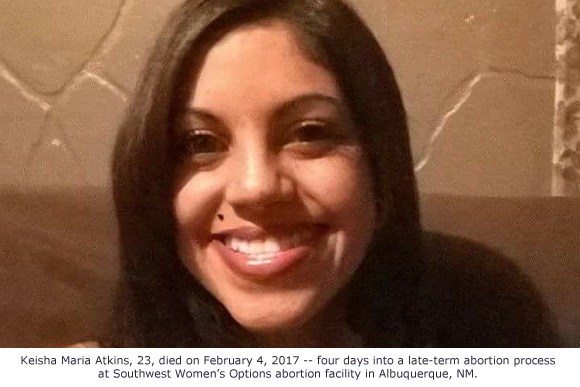 In 2017, Abortion Free New Mexico obtained the autopsy report for Keisha Marie Atkins, 23, who died from her legal abortion on February 4, 2017. Atkins had a late-term abortion, initiated at Southwestern Women’s Options (SWO), in Albuquerque, New Mexico. SWO is the largest abortion facility in the U.S. that openly “specializes” in abortion throughout all nine months of pregnancy. SWO is also the facility involved in the ongoing baby part harvesting investigation in New Mexico. The facility provided whole aborted baby brains for a students’ summer camp, likely without parents’ knowledge.

By its own admission, the CDC “cannot be used alone to calculate national case-fatality rates (number of legal induced abortion-related deaths per 100,000 reported legal induced abortions in the United States) because certain states did not report abortion data every year during this period.”

However, abortions have been steadily decreasing nationwide — due in part to pro-life activism on the sidewalks of abortion facilities, as well as legislation, education, and assistance to pregnant mothers. In ten years (2005 to 2014), among the same 48 areas that reported every year during this period, the CDC calculates that reported abortions have decreased by 20 percent.