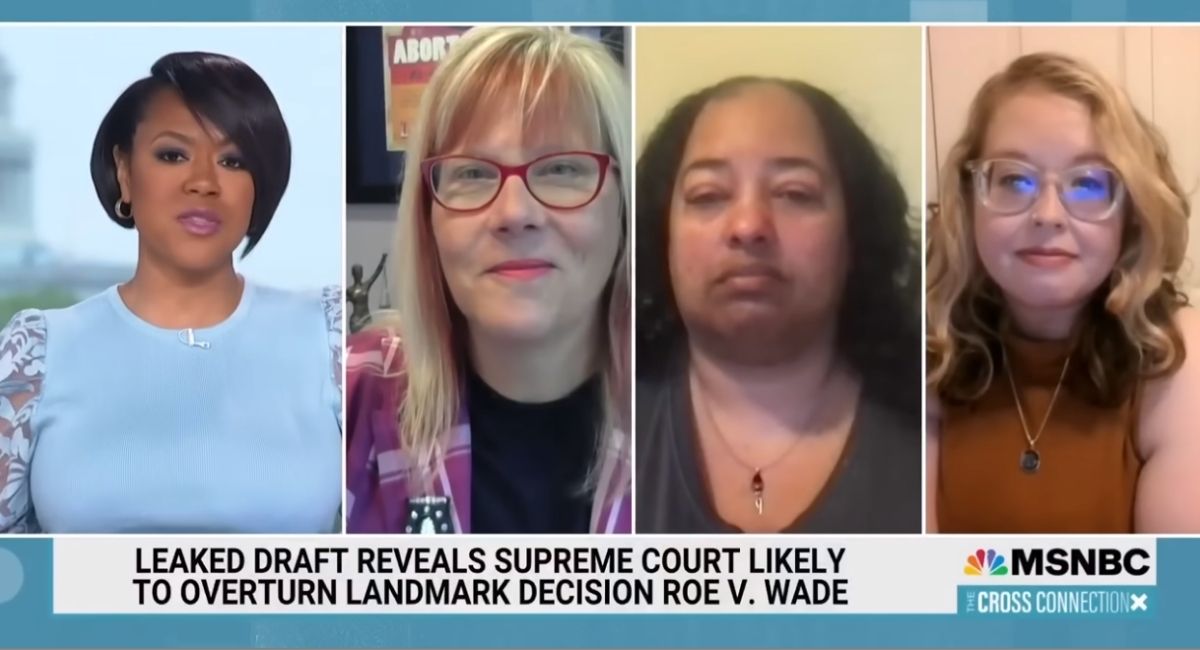 Abortion advocates are afraid that the Supreme Court will soon overturn Roe v. Wade, and because of this, many outrageous claims are making the rounds through the pro-abortion media. Recently, one such claim from an MSNBC commentator inferred that minority children are better off dead through abortion rather than placed for adoption. The commentators also outrageously decried the violence of the pro-life movement, even as abortion advocates are committing violent acts across the country as they call for the right to commit the ultimate violence — the intentional homicide of an undelivered baby.

On her Saturday morning MSNBC show The Cross Connection, host Tiffany Cross spoke with several abortion activists about what women will experience should Roe be overturned. Through the course of the conversation, the women inferred that adoption was not “safe” and that pro-lifers are “terrorists” and “Christian extremists.”

“This whole notion that women should just have children and let the kids get adopted, well that’s not always a safe route, particularly for Black and brown kids,” Cross said, citing statistics that minority children are adopted less often than white children.

Michelle Colon, executive director of an abortion advocacy group, agreed with Cross. “There is no rush to adopt Black babies or brown babies, just like there is no rush by the Republicans and the anti-abortion terrorists and lawmakers in protecting and safeguarding the lives of Black and brown children and Black and brown people in this country,” she said.

Despite the claims made by these women, adoption — in which a child is given a chance to live his life — is always preferable to abortion, which is a violent, horrific act. And while the foster care system is broken, that’s not a reason to kill a child who is already alive in his mother’s womb. Each child is worthy of life, even if they will grow up in a foster care or adoption situation. As far as the claim that there “is no rush” to adopt Black babies, there are believed to be 36 couples waiting to adopt for every one child placed for adoption.

READ: MSNBC slanders pro-lifers with the help of the abortion industry

Cross agreed with Colon’s use of the term “anti-abortion terrorists,” saying that people who call themselves pro-life achieve this through violence. She referenced several bombings of abortion facilities during the 1980s as proof that pro-lifers are terrorists who are committed to violence.

“There is violence, and it is terrorism, and I think it’s very important for us to recognize that it is Christian extremism at the root of the shame and the stigma that allows laws like this to pass and allows justices like this to be confirmed,” agreed Amy Hagstrom Miller, president of Whole Woman’s Health.

The use of rhetoric that refers to pro-lifers as “anti-abortion terrorists” and “Christian extremists” is incredibly misleading, especially in light of the events of the past week. Since the revelation that the Supreme Court will likely overturn Roe v. Wade, pro-abortion activists have terrorized churches, pregnancy centers, and pro-life organizations, while pro-life advocates have been assaulted. Supreme Court justices have been harassed in their homes, and calls for violence have been repeatedly made against the pro-life community on social media. And unfortunately, this isn’t new — pro-lifers have been subjected to violence for decades at the hands of those who call themselves pro-choice.