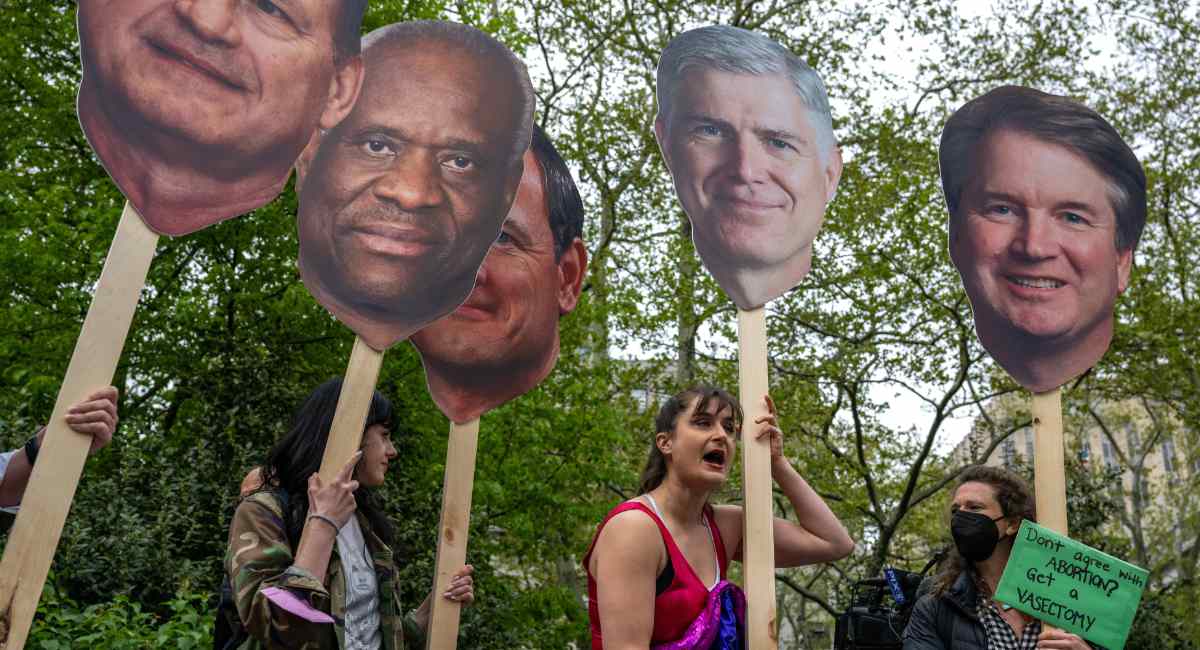 Pro-abortion protesters are planning to hold demonstrations outside the homes of Supreme Court justices in order to voice their dissatisfaction with its more conservative decisions.

Ruth Sent Us said the May 11 protests would be “peaceful” and described the homes as “[w]here the s​​ix Christian fundamentalist Justices issue their shadow docket rulings from.”

Judicial Crisis Network President Carrie Severino asked, “Is that like the ‘mostly peaceful’ protests burning down cities across the country during BLM, which appears to be connected with this group? How many of these other groups have engaged in violence before?”

The website for Ruth Sent Us links to another pro-abortion group, which boasts endorsements from left-wing groups like Code Pink.

The website notes that “stipends [are] available” for protestors. Who exactly is paying for these stipends?

More pointedly, who is funding the threat against Supreme Court justices? /2 pic.twitter.com/9J872h8pyF

The website links to a different organization, "Strike for Choice," which shows connections to groups including Black Lives Matter, Code Pink, Women's March SF, Kavanaugh Off Our Court, and Rise Up 4 Abortion Rights. How exactly are these groups connected? /3 pic.twitter.com/KckGEdsxfJ

On Twitter, Severino blasted the protests, which she compared to “disgusting antics” seen during Kavanaugh’s confirmation. She also noted that the group’s website offered “stipends” for activists.

“Who exactly is paying for these stipends?” she asked. “More pointedly, who is funding the threat against Supreme Court justices?”

The website asks for “peaceful protests.” Is that like the “mostly peaceful” protests burning down cities across the country during BLM, which appears to be connected with this group?

How many of these other groups have engaged in violence before? /4

The parallels between this planned protest and the disgusting antics we saw from left-wing dark money groups during the Kavanaugh confirmation are striking. /6

The protests will likely add to already mounting pressure facing the nation’s highest court. The draft opinion, penned by Alito, was leaked in what critics have described as a highly inappropriate breach of trust and likely attempt to pressure the justices into allowing Roe to stand.

Shortly after Politico published the opinion Monday, droves of protesters showed up outside the Supreme Court and demonstrations have continued to pop up in the following days. Often impassioned, the protests have sometimes led to tense confrontations and violence between the two sides.

Live Action News reported on a confrontation Wednesday during which an apparent pro-abortion protester seemed to attempt to take a sign from pro-life activist Bryan Kemper of Priests for Life. That resulted in police forming a barricade around the four pro-lifers who had walked into a large pro-abortion rally that evening. According to the Epoch Times, a female protester also hit Kemper in the head.

Thursday evening saw another large pro-abortion rally outside of the Court, which, by that point, had tall fences erected near the steps.

Speaker says he should have been aborted. pic.twitter.com/E2PSVXseLh

Police could be seen standing by as a series of pro-abortion speakers denounced threats to the availability of abortion.

Woman self described as Native American calls the pro-aborts a cult and says they make her and others look bad. pic.twitter.com/t7sgUYdkl2

Regardless of the Court’s ultimate decision, it’s likely to fuel the fiery debate surrounding abortion in the U.S. While many states will likely move to outlaw abortion, others are expected to keep it legal.

Justice Alito’s opinion argues that the Constitution reserves things like abortion as an area for the state to regulate. Interestingly, the late liberal Justice Ruth Bader Ginsburg, the namesake of “Ruth Sent Us,” also said states should have decided the issue instead of Roe usurping that authority for the federal government.

It’s unclear what Ginsburg – now deceased – would have thought of the protesters claiming to champion her legacy. She did, however, express concern about attempts to politicize the Court and identified that as a likely consequence of court packing. That’s something Democrats and left-wing activists have been pushing as a way to reverse decisions made by the Court’s current conservative majority.

“If anything would make the court appear partisan it would be that,” Ginsburg previously said. “One side saying when we’re in power we’re going to enlarge the number of judges so we’ll have more people who will vote the way we want them to. So I am not at all in favor of that solution to what I see as a temporary situation.”