Two pro-life pregnancy centers in Denton, Texas, were vandalized with radical pro-abortion messages over the weekend, defacing the front of both PRCs as well as their signs. The actions came on the heels of a leaked Supreme Court opinion in the Dobbs v. Jackson Women’s Health Organization case, indicating that the Court may overturn the infamous Roe v. Wade abortion decision which forced legalized abortion upon the nation in 1973.

Woman to Woman Pregnancy Resource Center (W2W) and Loreto House were both spray painted with the words, “Not a Clinic,” likely egged on by pro-abortion claims that falsely paint pro-life pregnancy resource centers as ‘fake’. The words “Forced birth is Murder” was also spray pained on the Loreto House facility’s brick.

Both pregnancy centers had surveillance cameras that documented the crimes.

Incident reports #22072478 (Loreto House) and #22072504 (Woman to Woman) were taken the morning of Saturday, May 7. At the time of the first report, Loreto House representatives had not yet provided video footage of the incident. After taking the report at Loreto House, officers went to Woman to Woman and documented similar graffiti. Officers were unable to speak with Woman to Woman representatives at the time of the report. Officers estimated the criminal mischief loss to be greater than $750 and less than $2,500 in both cases. No other reports of this nature have been filed. Directed patrols of area churches were conducted out of an abundance of caution. Several churches also hire private security or off-duty personnel.

“According to our cameras it seems to have been in the early morning hours Saturday the 7th,” Ramona Davis, CEO of Woman to Woman Pregnancy Resource Center (W2W) in Denton, told Live Action News. Davis said her cameras caught two persons on video; one was doing the spray painting while the other was in the parking lot.

W2W was founded over 30 years ago in 1986 and offers free services such as pregnancy and STI testing, doctor and community referrals and services, options counseling and mentoring, abortion recovery, birthing and parenting education classes, among other services.

In 2004, W2W officially added a resale shop; the proceeds from sales go back into the W2W operating budget, keeping their services free to the community. W2W has two locations, but only one was vandalized.

Davis told Live Action News she met with police late Monday afternoon to file her report, and estimates the damage to be between $3,000 and $5,000 due to both sides of the sign being damaged. 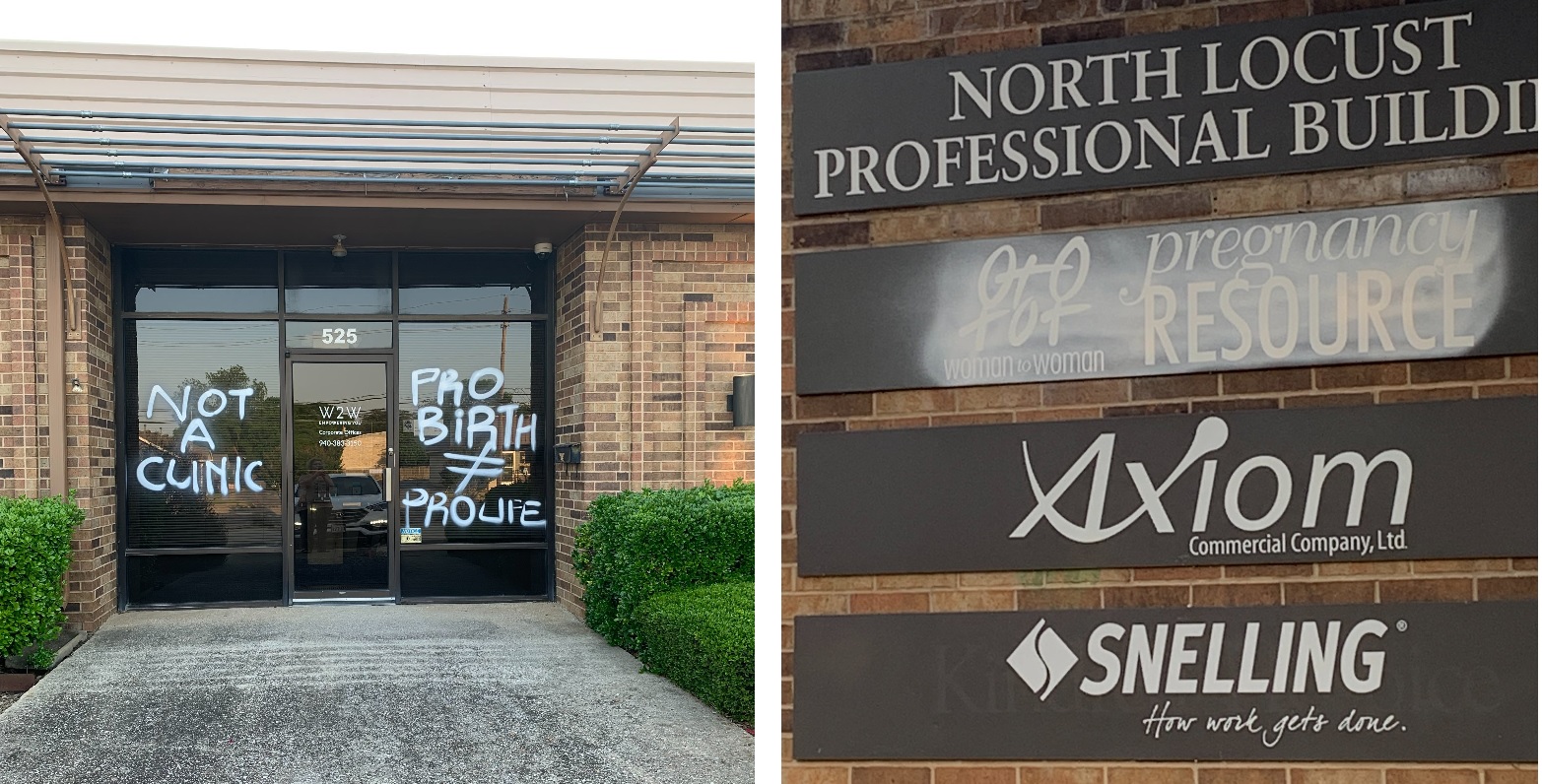 Randy Bollig, President of Loreto House, told Live Action News he filed a report with the Denton Police over the weekend but was told that as of Monday afternoon, the case had not yet been assigned to a detective. Bollig told Live Action News that based on what he could see in the video surveillance, the vandal at his facility appeared to be a young woman.

“The pro-abortion crowd is in a frenzy and they vandalized Loreto House last night. Today, there was a big protest rally at Denton Town Square and it was ugly. Of course, I was there with my cell phone taking video, and I did not get killed,” an e-mail released by Bollig to his supporters stated.

Bollig feels the vandal was likely a student that attended the pro-abortion rally later that day on the Denton square.

Denton is home to two colleges — the University of North Texas (UNT) and Texas Woman’s University (TWU), the latter of which ironically houses a collection of records from Sarah Weddington, who argued for abortion in the Roe v. Wade Supreme Court case in 1973.

“I came to Loreto House Saturday morning around 8am and saw it,” Bollig said. “It occurred Saturday morning about 3 am – I think it was a girl, likely a college student. She walked up from the South, had a backpack on, and parked down the street,” Bollig added. 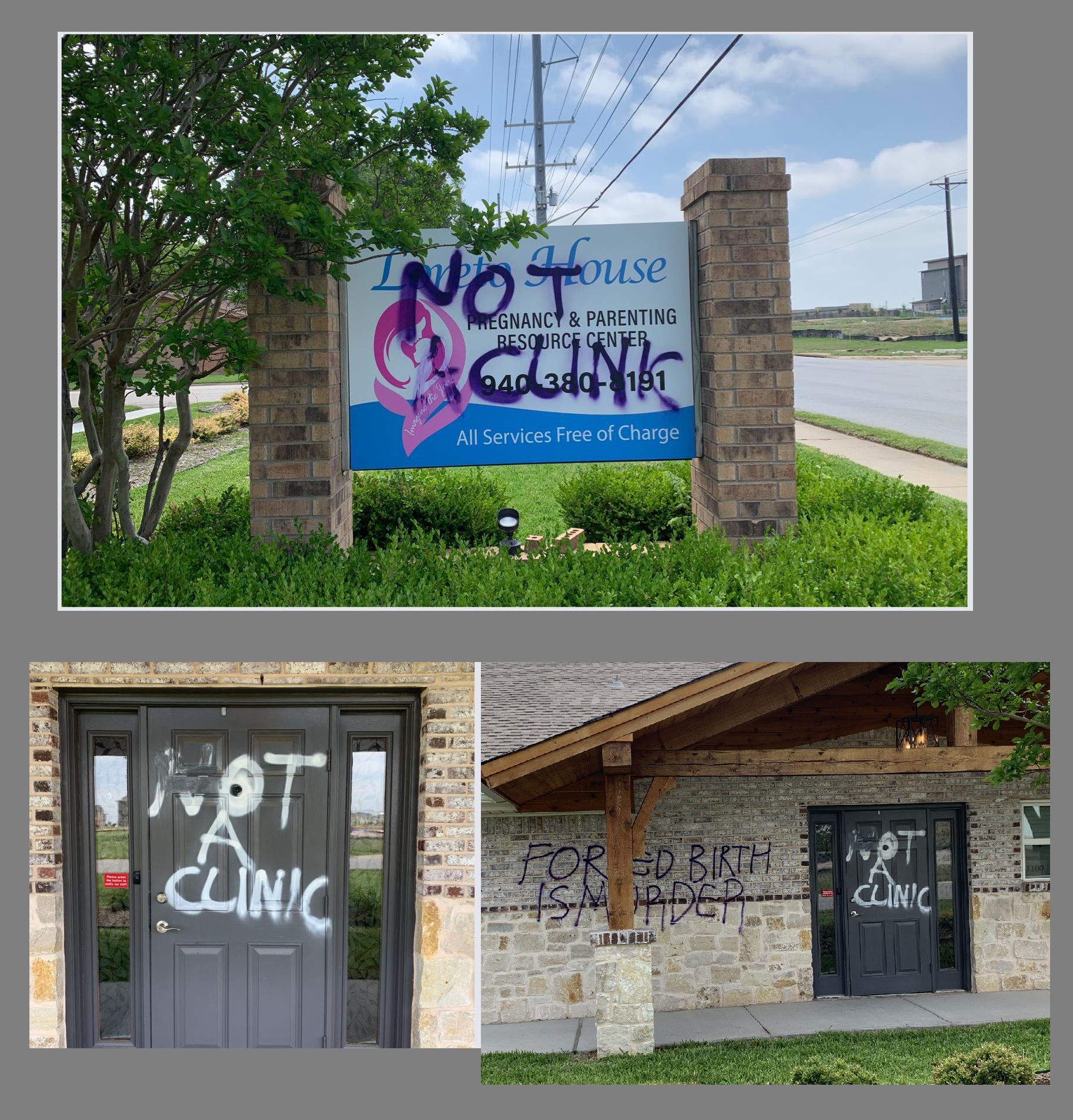 Bollig said he estimates the damage to be at least $2,500, possibly more if they have to replace the brick and stone the vandals painted. “It’s a felony,” Bollig noted.

During the day on Saturday, Bollig told Live Action News that “Numerous cars and people drove by.” He claimed some stopped, took selfies, and laughed.

One abortion supporter even praised the vandal and wrote on Twitter, “this person’s act warmed me…” 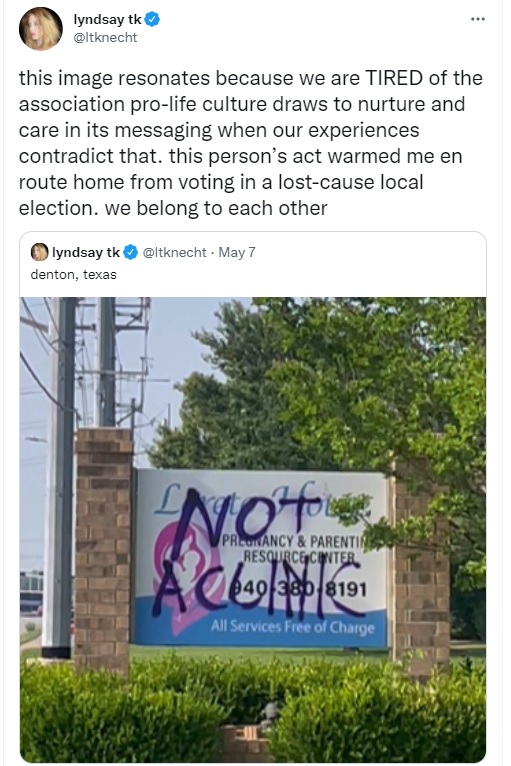 “I have turned the video over to police,” Bollig stated.

Loreto House was founded 15 years ago, and the center serves 30-40 women a day, according to Bollig.