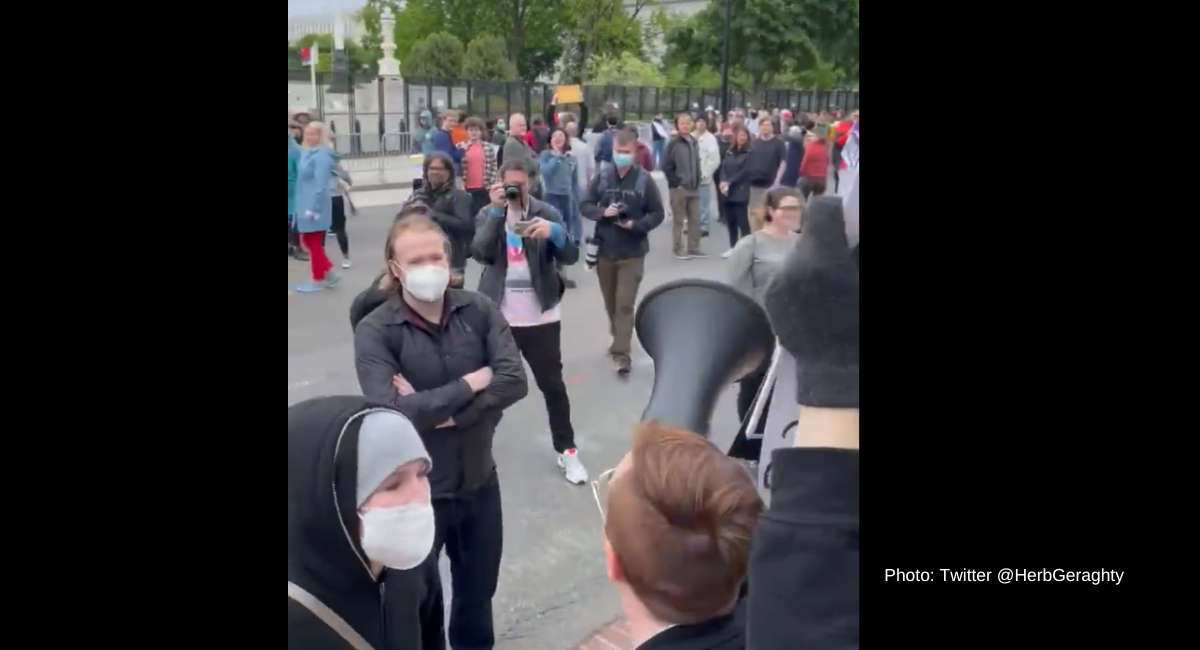 Across the country, abortion activists have been protesting over the leaked draft of the Supreme Court decision in Dobbs v. Jackson Women’s Health Organization, which indicates that SCOTUS will likely overturn Roe v. Wade. Hundreds of people gathered in front of the Supreme Court on Mother’s Day over the leak, including abortion supporters who were protesting the draft opinion, and others acting as counter-protesters against the abortion activists. Among them was Herb Geraghty, executive director of Rehumanize International, and other members of Rehumanize International and the Progressive Anti-Abortion Uprising (PAAU).

In a Twitter thread, Geraghty explained how quickly the pro-abortion protesters devolved into violence and harassment, culminating in an assault. “Moments after we arrived and started chanting, this person approached my friend Kristin (purple hair) and began getting very aggressive in her face,” Geraghty began. “Because I was worried they were about to get violent, I placed myself between them.”

Moments after we arrived and started chanting, this person approached my friend Kristin (purple hair) and began getting very aggressive in her face.

Because I was worried they were about to get violent, I placed myself between them. pic.twitter.com/drFXoZQxnQ

Geraghty explained that police arrived to separate the abortion activist from the pro-lifers, only for the activist to immediately return and retaliate. “They went back to their people for a moment and then… they came back with a full bottle of a vegan protein shake (lol) and dumped it all over me,” he said. “The police officers also definitely got hit (again, I must lol). Despite this, our team continued on for a few hours — singing and chanting to both be a voice for the unborn but also to represent the MILLIONS of pro-life Americans who have been hoping, working, praying, and voting for 50 years to overturn Roe v. Wade.”

Though the attack was, relatively speaking, mild, Geraghty said they have increasingly been witnessing violent attacks — including sexual assaults — from abortion activists.

“I have seen first hand my fellow pro-lifers shoved, punched, pushed/pulled to the ground, had our signs stolen out of our hands and used as weapons against us, and more,” Geraghty said. “Just within the past week we’ve seen multiple sexual assaults with pro-abortion demonstrators intentionally groping the breasts and genitals of (in particular, our female and gender nonconforming) pro-life activists, including even minors in Indiana. While we have been greatly saddened (and some of us, actually traumatized or re-traumatized as a result of past experiences) by these pro-abortion attacks — we are not really surprised.”

Geraghty said that pro-lifers cannot back down, though, as this is clearly an intimidation campaign engineered in response to the Supreme Court draft leak. “We know that the pro-abortion lobby is actively attempting to manufacture the appearance of enough public pressure to intimidate the justices into changing their mind. They’re threatening them online, at rallies, and now even outside their homes. We cannot allow these extremist radicals to control the narrative.”

Geraghty added that while pro-life advocates may face attacks, it does not compare to the violence preborn children suffer during abortion:

The annoyance of getting a chocolate protein shake thrown in my face is nothing compared to the violence that an unborn child experiences when a physician takes a pair of forceps and rips off their limbs and crushes their skullI am not the victim. I am just a person with a voice who will not stop fighting for justice until I no longer can. To pro-lifers: I urge you not to be discouraged. We are going to win this. Get involved and get connected with other people in your community to fight for life.