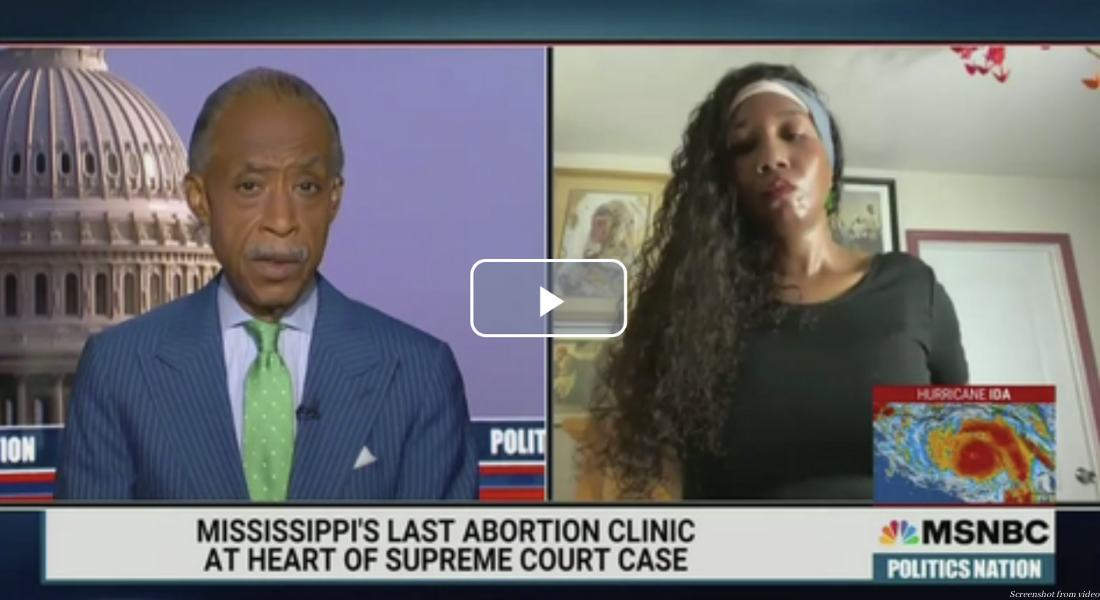 She added, “What it reminds me of, quite honestly, is a suicide bomber. Someone who feels they have the right, the moral duty to mess up somebody else’s life for the greater good.”

NewsBusters made note that MSNBC host Al Sharpton did not correct or challenge his guest’s outlandish remarks. The Supreme Court case they were speaking of is Dobbs vs. Jackson Women’s Health Organization, which the Court agreed to hear in May. It centers around the question of whether or not “viability” (often defined as the ability to survive outside the womb, a moving target determined by gestational age and other factors, including the availability of medical technology) should continue to be the determining factor of when state abortion restrictions can be enacted.

The law also relates to the violence of second trimester D&E abortions, in which a preborn child — capable of feeling pain since at least the end of the first trimester if not earlier — dies when her arms and legs are ripped from her torso, and her head is crushed.

Based on such violence, if any group is comparable to suicide bombers, perhaps it should be the abortion industry.

Pro-lifers are focused on saving lives that others dismiss as unworthy of acknowledgement. While Jefferson may describe pro-lifers as people who think they have “the moral duty to mess up somebody else’s life for the greater good,” pro-lifers are working to save babies from violent deaths and help women realize their full potential to be mothers and achieve their goals.

READ: MSNBC goes on attack: Pro-lifers want to oppress women like the Taliban

Despite what was presented on MSNBC, countless women spared abortion by the work of pro-life advocates have shown nothing but gratitude for the resources and support they received from pro-life organizations and for the very lives of their children, whom they deeply love. In fact, even the debunked and unreliable pro-abortion Turnaway Study found that for women who wanted an abortion but were unable to get one, only seven percent (7%) still wished they had had an abortion by their child’s first birthday, and five years later only four percent (4%) wished they could have had the abortion. The other 96% were all glad they didn’t choose abortion. Their lives obviously were not ‘messed up’ by their babies.

Pro-lifers are tirelessly volunteering to help women escape this fate — not for the “greater good” but for the women’s own good and the good of their babies. Pro-lifers frequently continue relationships with the women they help for months and even years after the births of their babies. These women’s lives aren’t ‘messed up’ because they had children, and many women credit their babies for helping them to make better decisions in life.

On the other hand, the abortion industry not only ‘messes up’ women’s lives by causing them emotional pain and regret, but it literally ends innocent lives. The purpose of abortion is to end a woman’s pregnancy by ending the life of her child, and the abortion industry says it is for the ‘greater good’ to target women of color and underprivileged women for abortion.

Abortion advocates have claimed legalizing abortion would end child abuse. It didn’t. And they claimed legalizing abortion would reduce crime rates. It didn’t. The abortion industry (and often, the family and friends of the woman) leads women to believe they aren’t good enough, rich enough, old enough, young enough, or educated enough to be mothers — and profits financially as a result.

No, MSNBC, pro-lifers aren’t anything like suicide bombers. Pro-lifers are the ones running to save people.