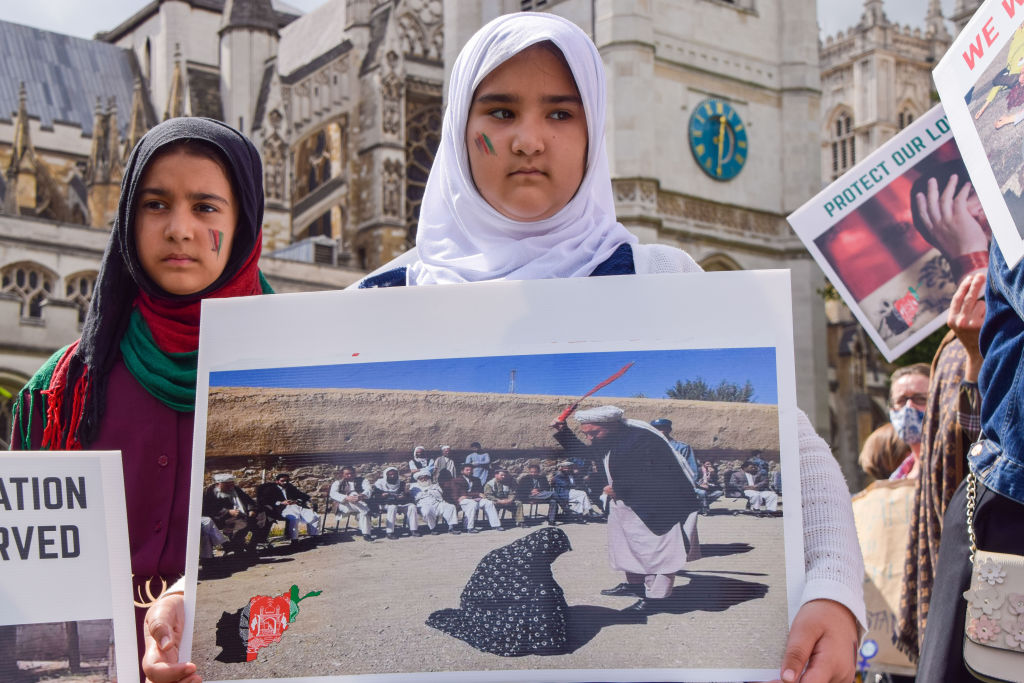 In the wake of the resurgence of the Taliban, some media commentators are apparently looking for ways to score points against their political opponents, allowing them to draw intellectually dishonest comparisons between pro-life Americans and an oppressive, murderous, misogynist regime that is — at latest report — going door to door capturing girls as young as 12 to become the sex slaves of Taliban officers.

In a recent opinion piece by MSNBC contributor Dean Obeidallah, and others like MSNBC host Joy Reid, the suffering of the Afghan people is used to smear the those who advocate for pro-life policies.

“Look, nobody is saying the GOP and the Taliban are equally bad,” Obeidallah argues in an attempt to legitimize his point. “But in just the past few months, we’ve seen Republicans champion measures to deprive women of freedom over their own bodies,” as well as other laws he claims are anti-women. It is evident that Obeidallah’s target is not one political party, but all who hold pro-life beliefs and believe in policies that he thinks “oppress” women.

At a time when Afghan women are hiding in their homes and wondering if they will be beat or executed for going to work or school, @MSNBC is running a piece comparing pro-life Americans to the Taliban. pic.twitter.com/sYRyCGh6Tv

The reality is that being pro-life is not limited to a particular political party or religion. Pro-life convictions are firmly rooted in science, and pro-lifers are a diverse group of people who share a common belief in the intrinsic value of every human life.

Absurd Claim 1:  Pro-lifers are working to impose their religious beliefs on others, like the Taliban

Like the Taliban, Obeidallah argues, pro-lifers are driven “at least in part, to impose their religious beliefs on all others.” He cites the example of Arkansas’s Unborn Child Protection Act, which would outlaw abortion except to save the life of the mother (abortion is never medically necessary), and claims that Governor Hutchinson’s motivation was “turning his religious beliefs into the law of the land.” As so-called proof, Obeidallah cites the governor’s comment that he was motivated by his “sincere and long-held pro-life convictions.” But Obeidallah fails to demonstrate how the governor’s convictions against the violence and oppression inflicted on preborn humans through abortion equate to the Taliban’s religious fundamentalism that inflicts violence, oppression, and misery on women.

One prominent group, Secular Pro-Life, advances a simple, non-religious argument that captures the essence of what pro-lifers believe: 1) that all preborn babies are human organisms; 2) that all human organisms are morally relevant; 3) that it is generally immoral to kill humans; and 4) that bodily rights aren’t enough to justify elective abortion.

As Secular Pro-Life points out, the notion that human life begins at fertilization “is not a religious premise; it is a biological fact, attested to in countless biology and embryology texts and affirmed by the majority of biologists worldwide.” Indeed, former abortionist Dr. Bernard Nathanson, who committed 75,000 abortions before becoming a pro-life activist, claimed that his newfound pro-life advocacy was rooted in his scientific knowledge: “As a scientist I know, not believe, know that human life begins at conception.”

Absurd Claim 2:  Pro-lifers want to control women’s bodies and choices, like the Taliban

Obeidallah also argues that pro-lifers want to control women’s bodies and choices, and thus pose a threat to America similar to that posed by the Taliban in Afghanistan. He claims that “the ability of women to control their own bodies should be a guaranteed human right,” and that pro-lifers are “desperate to withhold it from them.”

READ: She refused abortion, so he tried to beat their preborn child to death

This kind of rhetoric is without any basis in reality. There is no fundamental right to end the life of another human being due to the inconvenient or even traumatic circumstances of their conception. Obeidallah argues that pro-life laws cause unconscionable oppression of women especially in cases of rape, but the truth is that the violence of abortion is not a solution to the violence of rape. The violent act of abortion does not heal trauma and does not undo the assault. But it does kill an entirely innocent human being.

Obeidallah labels abortion as a human right and therefore concludes that opposition to abortion is oppression. However, the primary, inalienable human right is the right to life. Pro-lifers also see women who face difficult pregnancies as deserving of an authentic choice, but not the violence of abortion. As Feminists for Life points out, “Abortion is a reflection that we have not met the needs of women.” Pro-lifers believe that instead of society forcing women to choose between motherhood or a career, livelihood, success, and the like, women should be able to do both — and that we should forge a society where the lives of both mothers and preborn babies are cherished.

Compare these pro-life motivations to the Taliban, who shot Malala Yousefzai in the head for promoting the education of girls. The Taliban is also restricting the basic rights of women, including the right to move about freely, the right to vote, the right to work, the right to dress in anything but the face-covering niqab, and, of course, the right to life. The comparison of millions of pro-life Americans — who want women to be free to work, to be educated, and to choose life for their babies — with the Taliban is dishonest and shockingly offensive.

Obeidallah is grasping at straws in his cynical quest to use the Taliban’s resurgence to score political points against pro-lifers. This becomes especially evident when he tries to compare prudential policy positions — like some pro-life legislators’ lack of support for the Paycheck Fairness Act or the Violence Against Women Act — with the Taliban’s oppression of women. This kind of baseless comparison, aside from being patently false, minimizes the atrocities visited upon women by the Taliban, both past and present.

It’s hard to comprehend Obeidallah’s callous disregard for the real suffering of people tortured and killed by the Taliban, and the dark days ahead for women in Afghanistan. When talking heads compare this terror to the work of pro-lifers in the United States intending to support human flourishing and protect women and babies, one wonders if they take the impending threat to women in Afghanistan seriously. Such a comparison erases pro-lifers who are nonreligious, confounds very real issues by elevating petty political goals to the level of such atrocities, and delegitimizes the author’s argument. Pro-lifers, who give women life-affirming choices and seek to protect all human life, will not be deterred.

Editor’s Note, 8/24/21: This article has been updated since its original publication to remove a percentage error.