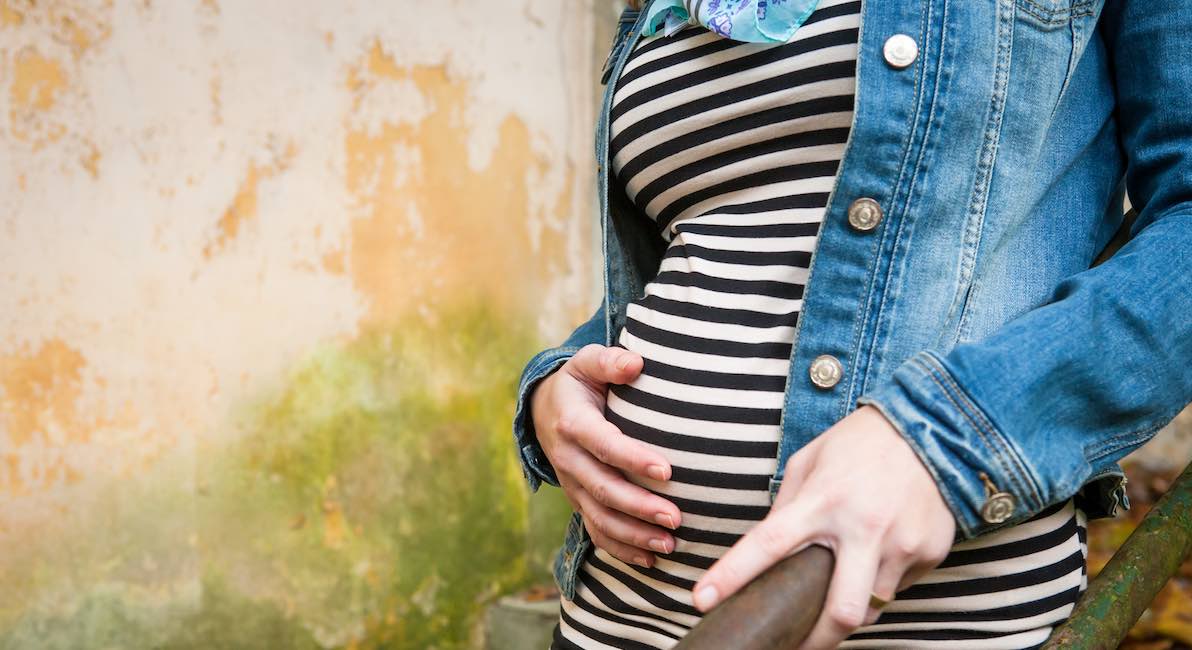 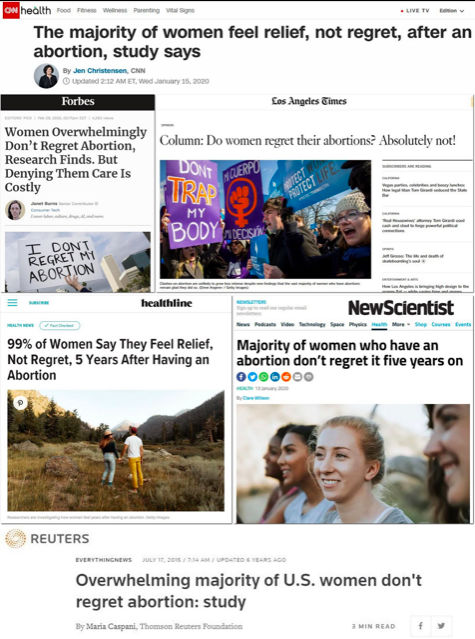 The Turnaway Study has resulted in many published articles comparing women who obtain abortions versus women who are denied them. The specific article discussing abortion regret is “Emotions and decision rightness over five years following an abortion” and can be found here.

Much of the discussion about this study has focused on whether this statistic is accurate. There are questions about study methods and limitations, and you can read more about that here. [LAN Editor’s Note: Read more here about the study’s numerous errors.]

But even if we assume the study is sound, the above press coverage leaves an incomplete picture of the study’s findings. The Turnaway Study also looked at the mental health outcomes for women who went to clinics to get abortions but were turned away (because they were too far along in pregnancy for the clinic’s gestational limits). I haven’t been able to find these particular research results published online, but here is a picture from my copy of the book “The Turnaway Study,” Chapter 4. Mental Health, page 126: 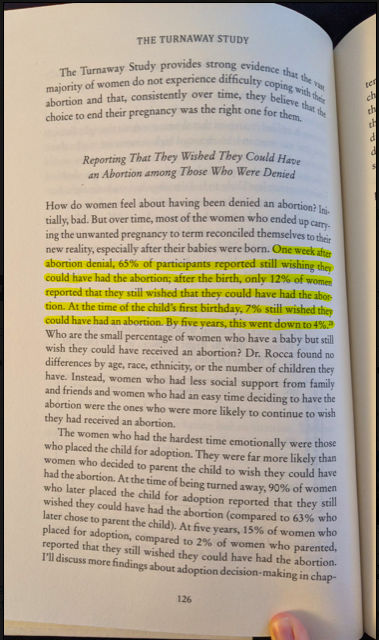 This portion includes an endnote marked “28,” which references this citation:

The closest online resource to this citation is the article I linked above about abortion regret (or lack thereof). But that article discusses only the women who received abortions, not the women who carried their pregnancies. So far I’ve found no peer-reviewed publication discussing these statistics, much less any major press coverage of the results.

Post-publication edit 3/10/21 – Thank you to one of our readers for sending me the peer-reviewed study here: “Emotions over five years after denial of abortion in the United States: Contextualizing the effects of abortion denial on women’s health and lives,” Social Science & Medicine 269 (2021) 113567.

The lack of discussion is unfortunate because there’s a lot of interesting information here. First of all, of course, the same study that found that, five years later, 99% of women did not regret their abortions also found that 96% of women no longer wished they’d had an abortion. Taken together, it sounds as if most people come to process and accept what’s already happened no matter which way it goes. (Research about lottery winners and people paralyzed in accidents seems to confirm this idea – their overall happiness doesn’t ultimately change as much as you’d expect.)

Also worth noting (all of the following info is also from the book page photographed above):

Only one week after being denied an abortion, over a third of women no longer wished they could have had one. This is a surprising level of ambivalence. These women not only contemplated abortion but physically arrived at clinics prepared to get abortions. I would expect that level of action to imply a greater level of decision certainty, but this statistic suggests otherwise. The pro-choice side frequently discusses how abortion restrictions pressure women to carry pregnancies they may not want, but it’s also worth discussing how unrestricted abortion access can pressure women to get abortions they may not want. We’ve published testimonies from post-abortive women about that kind of pressure here.

Women who had less social support from family and friends were more likely to continue to wish they had received an abortion. While few women continued to wish they had aborted, of the group who did, they were less likely to have support. This result isn’t surprising, but it’s worth highlighting because we can all help here. Find ways to connect to your community and to support pregnant women and parents of young children. We had a pretty great list of ideas (from all of you!) here if you’re looking for inspiration.

Women who placed for adoption were significantly more likely than women who parented to still wish they’d had an abortion. At five years out, 15% of women who placed for adoption, compared to only 2% of women who parented, reported that they still wished they could have had an abortion. (The 4% statistic at five years out is a combination of these two groups.) A few thoughts here. (1) It makes sense that the love and connection women experience with their children would have a mitigating effect on their negative emotions regarding the factors that led them to seek abortion in the first place. If they place their children for adoption, they have fewer interactions that can lead to that mitigating effect. (2) We as pro-life activists need to take note of the complicated effects of adoption.

Of course adoption is preferable to abortion, but we need to be sensitive to the complex psychological and emotional effects adoption can have for all parties (children, biological parents, adoptive parents). We can advocate for adoption in some circumstances without oversimplifying it. We published some testimonies from people with experience with adoption here (see the subheading “On Adoption”).